The same assets that make the ISS a powerful laboratory for scientists also make it an invaluable platform for student research investigations and educational outreach. Space Station Explorers is a community of educators, learners, and organizations that make learning science, technology, engineering, and mathematics (STEM) fun and exciting through connections with the ISS National Lab. In FY20, almost 3 million people engaged with the 23 partner programs within the Space Station Explorers consortium. Moreover, the Space Station Ambassadors (empowered educators that receive training and exclusive access to program resources) grew to more than 1,000 volunteers—up from 800 in FY19.

This year, many students, teachers, and parents are relying on digital, virtual, and other unconventional education methods to keep children excited and engaged in STEM learning during the COVID-19 pandemic. In response to this transition, CASIS launched a learn-at-home online initiative to reach these children by highlighting activities and curriculum easily accomplished with materials found at home. The site has had more than 33,000 unique visitors (10 times the web traffic of typical CASIS STEM digital resources), and many Space Station Explorers consortium members launched new or alternative projects to engage with students and teachers through this medium.

Also in response to the need for at-home STEM learning, partner program Story Time From Space experienced a substantial increase in engagement and media coverage, reaching more than 1.6 million students, educators, and adults as part of its targeted learn-at-home activities from January to September 2020. Through Story Time From Space, students are able to watch videos of astronauts reading STEM-themed books from inside the space station. Crew members also film videos onboard the ISS of science demonstrations related to the science themes in the books. All videos, along with accompanying educational materials, are available on the Story Time From Space website for free.

Space Station Explorers’ newest partner products and programming were also well positioned to meet the needs of a virtual-hungry community of parents and educators. Nickelodeon’s teacher’s guide (part of the Slime in Space: A Virtual Field Trip, detailed in the R&D Progress and Successes section) helps educators leverage the spaceflight demonstrations to engage and educate young students about non-Newtonian fluids. Additionally, representatives from the ISS National Lab education team, in partnership with Felix & Paul Studios (the Emmy award-winning immersive entertainment studio) and TIME, conducted virtual reality experiences of the ISS for hundreds of student groups and the general public at the International Astronautical Congress held in Washington, D.C., this year, which has multiple programs specifically designed for local K-12 students. These digital assets continue to be available for use in learn-at-home environments.

In honor of the 20th anniversary of continuous human presence in space and in adaptation to the global pandemic, CASIS partnered with Virtual Strides to raise $14,000 via a virtual race, the funding from which will be used to support a “Space Lab” within qualifying schools. CASIS also hosted a virtual NASA downlink event for students that had sent experiments to the ISS or participated in Space Station Explorers programs, allowing the students to have a live question-and-answer session with NASA astronaut Chris Cassidy. The event was also broadcast live from the ISS on NASA TV.

Also in honor of the 20th anniversary, the CASIS education team collected data from the 17 Space Station Explorers partner programs that have enabled direct student experiments on the ISS (i.e., programming that does not merely include activities that simply inform students about the ISS or classroom activities that might be hands-on and inquiry-based but do not directly involve experiments using the ISS). Data from his comprehensive study of the past 20 years of student experiments using the ISS was compiled into a report that highlighted several impactful findings.

In total, the 17 programs have supported more than 800 experiments from K-12 students in the U.S. (activities designed, launched, and operated on the ISS, or activities that used data from launched investigations). Over the past 20 years, more than 2.6 million students have participated in these spaceflight experiment programs. Several of these programs have extensive reach, with four programs reaching more than 10,000 students per year. Furthermore, many programs are in-depth experiences, requiring 20 hours or more of activities to participate. 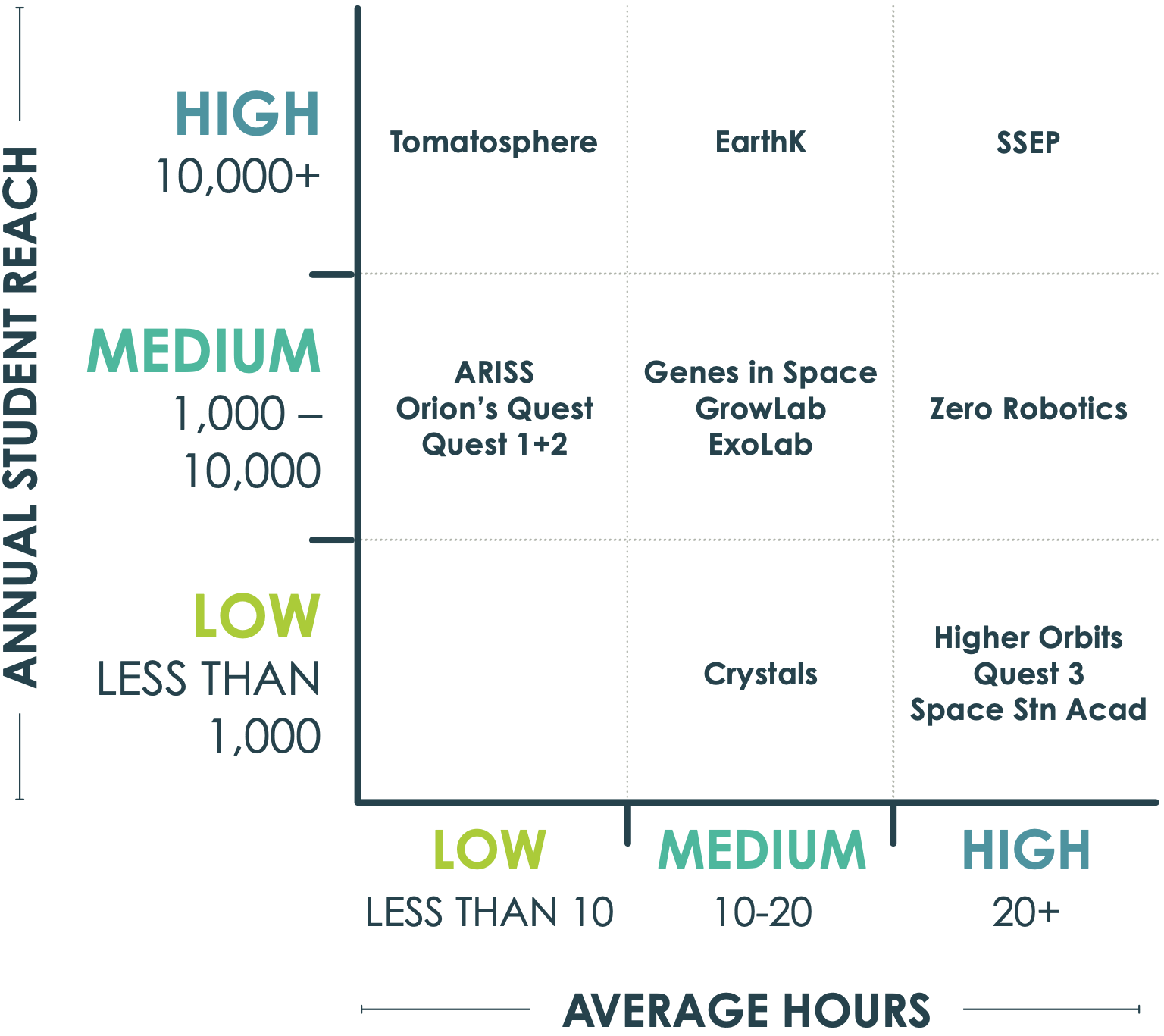 It is noteworthy as well to examine the demographics of the participants: 45% of participants identified as minority and 46% as female. Six of the programs predate CASIS management of the ISS National Lab, but all are current members of the Space Station Explorers consortium, and many continued to send experiments to the ISS in FY20.