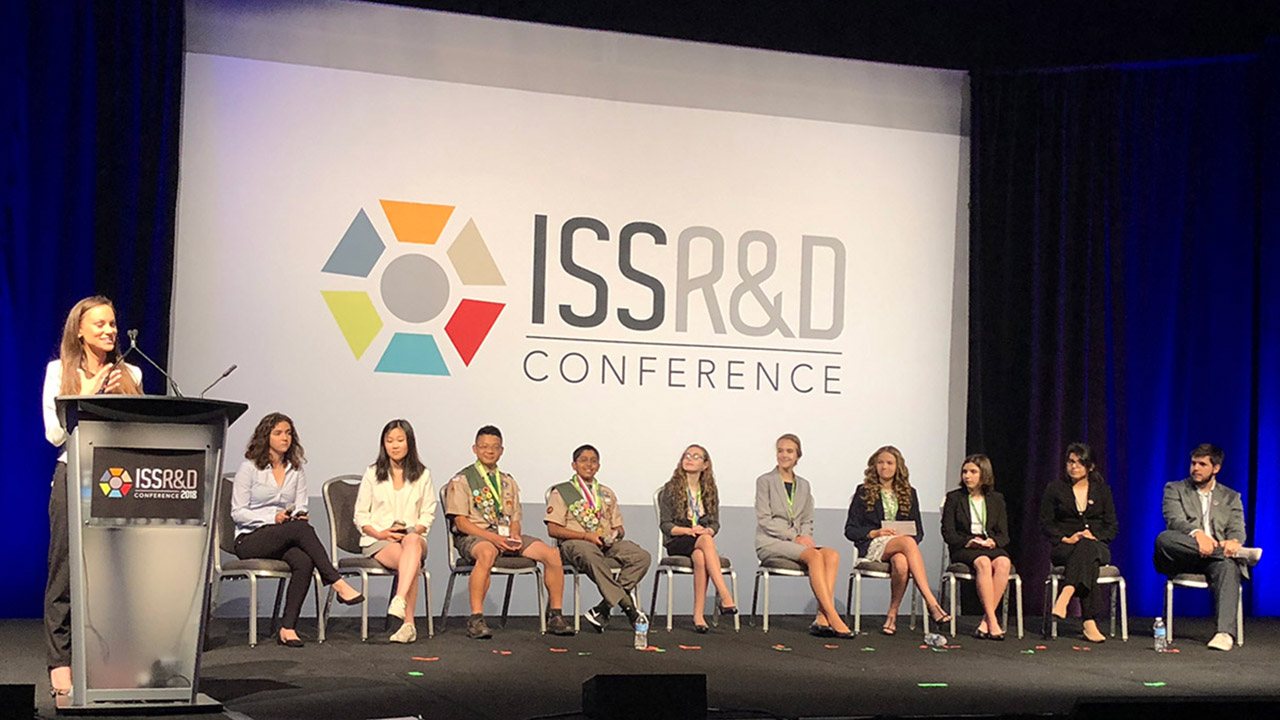 Emily Calandrelli (left) moderates a panel of students who have sent experiments to the ISS.

The final day of the 2018 ISS Research & Development conference was STEM Day, with special activities for students and educators! It kicked off with an exhilarating presentation by former NASA astronaut Terry Virts, followed by demos of programs that use the International Space Station to make STEM learning exciting. The Marketplace Expo was open to the public, giving local people the chance to talk with vendors representing NASA and many commercial service providers that work with the space station. They saw that sending research to space is now within reach for a wide range of people and institutions, including K-12 students and schools.

In a mid-morning plenary session, five student teams shared their experiences developing experiments for the International Space Station. The session moderator was Emily Calandrelli, producer of Xploration Outer Space. Middle school and high school students stood in front of hundreds of researchers, engineers, innovators, and investors. Many young people would have been intimidated by such an audience, but these well-prepared students delivered their talks with professionalism and poise.

An unforgettable part of the session was a live video downlink with the ISS, in which the students and moderator got to talk with NASA astronaut Drew Feustel. Drew told funny stories and also shared inspiring messages with the students. “I went from coming out of high school with mediocre grades and attending community college and not really knowing what I wanted, to doing space exploration [with NASA],” he said. “I believe that anything’s possible. Don’t leave any opportunities uninvestigated. Take every chance you can, and don’t lose sight of those dreams!” 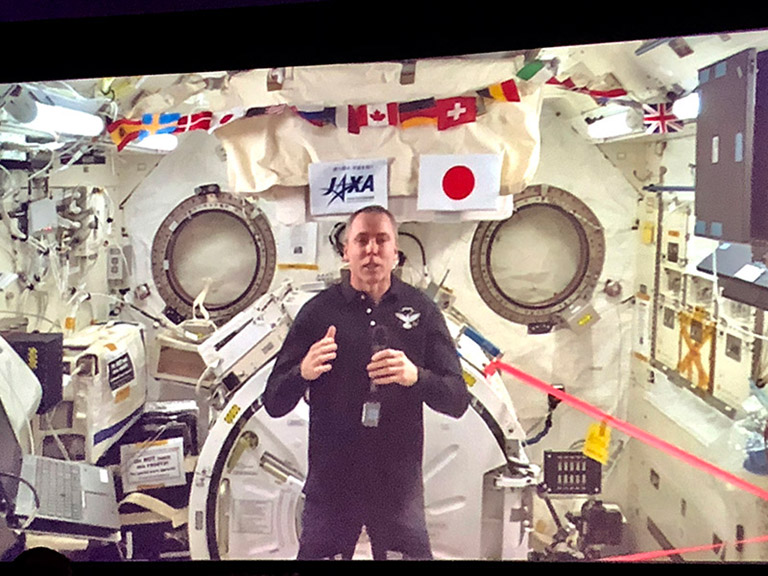 The moderator and students got to talk to Drew Feustel through a live video downlink with the ISS.

What Did These Students Send to Space?

Here’s a little more about the students who presented on STEM Day. The session started with the two winners of the 2017 Genes in Space competition. Their experiments assess two different risks that the space environment might pose to human health. Elizabeth (Liza) Reizis’ experiment looked at immune function in space. The experiment used PCR (polymerase chain reaction) to multiply specific fragments of DNA. Multiplying the DNA fragments with this technique improves detection and accuracy of measurements.

Sophia Chen, the other Genes in Space winner, looked at increased risk of cancer in space caused by radiation, microgravity and other stresses. Radiation can cause double- or single-stranded breaks in DNA, and the expression of DNA repair genes is subdued in microgravity. Like Liza’s experiment, Sophia’s experiment uses PCR to multiply target DNA fragments.

Sophia and Liza delighted in recounting the experience of attending the launch that transported their experiments to the ISS. “It was absolutely thrilling,” said Sophia. “It was almost surreal.” Liza added, “It was very exciting. The moment I realized that it was actually happening is that the whole ground starts shaking, and you feel it all through your body.” 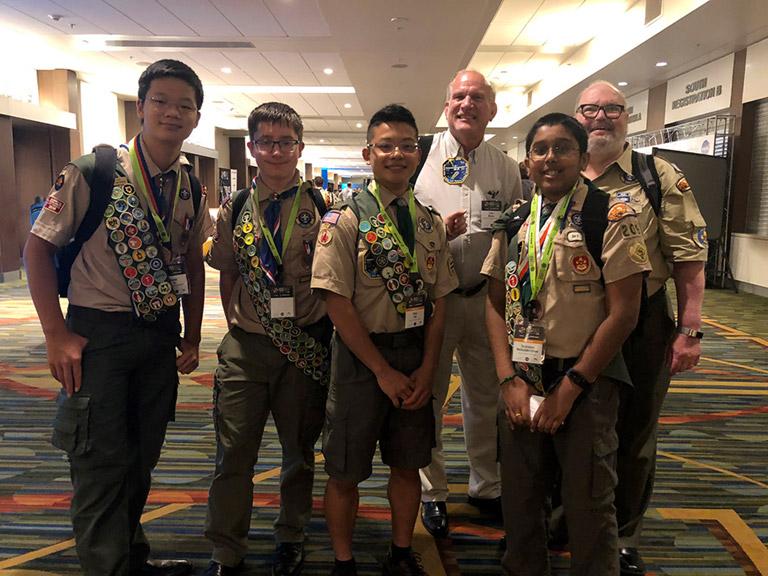 Chicago-area Boy Scouts have worked on their experiment for three years, starting with brainstorming and ending with analyzing the data they received from the ISS.

The next presentation featured members of a Boy Scout team from the Chicago area. Elliot Lee and Sai Venkatakrishnan explained how their team designed an experiment to study the mutation rate of E. coli bacteria. They used a color indicator that could detect certain mutations. To measure the rate, they needed to capture of high-quality, close-up photos at regular intervals over 26 days. The Scouts developed a clever solution to image all the samples using a single automated camera. They designed a carousel that carried eight plastic well plates with the sample wells facing inward. A stepper motor rotated the carousel in controlled increments to position each sample in front of the camera. They designed the carousel in a computer, 3D printed prototypes in plastic, and milled the final version out of aluminum.

Kaitlyn Twesme and Payton Kelly-Van Domelen presented the results of crystallization experiments that they sent to ISS after winning the Wisconsin Crystal Growing competition. What’s great is that they just won that competition again this year, and they’re designing a new ISS experiment that uses an entirely different method to form the crystals. Their first experiment took saturated solution and cooled it. The next one will use evaporation instead of cooling.

They described some of the things they valued about the experience. Kaitlyn said, “I was able to learn about career opportunities that I would never have known of. My favorite part of this experience was being treated like a professional the entire time.” Payton said she got experience with skills that weren’t taught in the high school classroom, such as “presenting to a large audience, answering questions from audience members, presenting a poster to the public, and learning design software” to make the art for the mission patch. She excitedly added that she won a full scholarship to attend Space Academy in Huntsville this August! 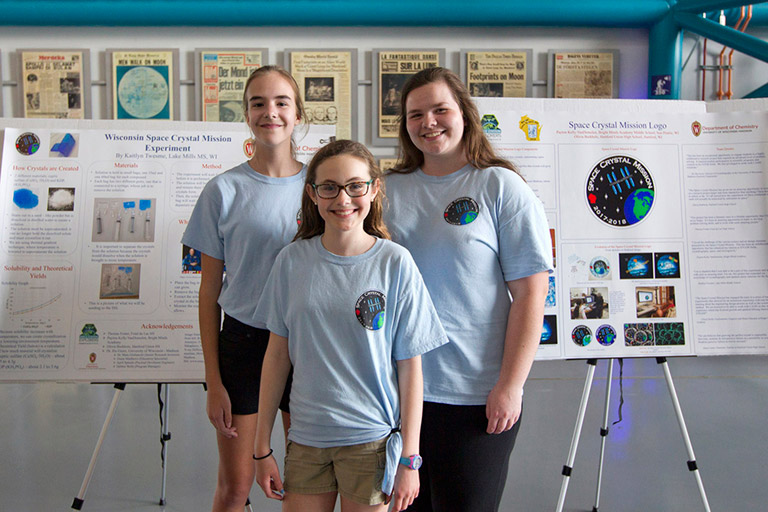 Sydney Wagner and Evie Currington presented the experiment that their team created through the Student Spaceflight Experiments Program (SSEP). They studied the regeneration process of a type of planarian flatworm known for its ability to regenerate. If you cut such a worm in half or even in smaller fragments, each fragment grows into a complete worm. That’s because these tiny flatworms have stem cells throughout their bodies. Understanding stem cells is important for developing new medical treatments.

Finally, Jack Timmins Adela Cervantes described their experiences participating in the Zero Robotics high school competition. This is one of several activities that are options in their school’s club called BACON (Best All-around Club Of Nerds). After winning several stages of competition, they got into the final tournament, in which SPHERES robots on the ISS carry out the programs the students wrote. And they discovered that real life doesn’t work quite like the simulation. Shortly after they finished presenting at the ISS R&D conference, they hurried over to do another presentation, this time at the enormous Google Cloud Next conference in Moscone Convention Center!

These student stars of STEM Day are smart, funny, articulate, passionate scientists. Joe Vockley, the new Executive Director and President of CASIS, was thrilled with the student plenary session, saying it was his favorite session of the conference. 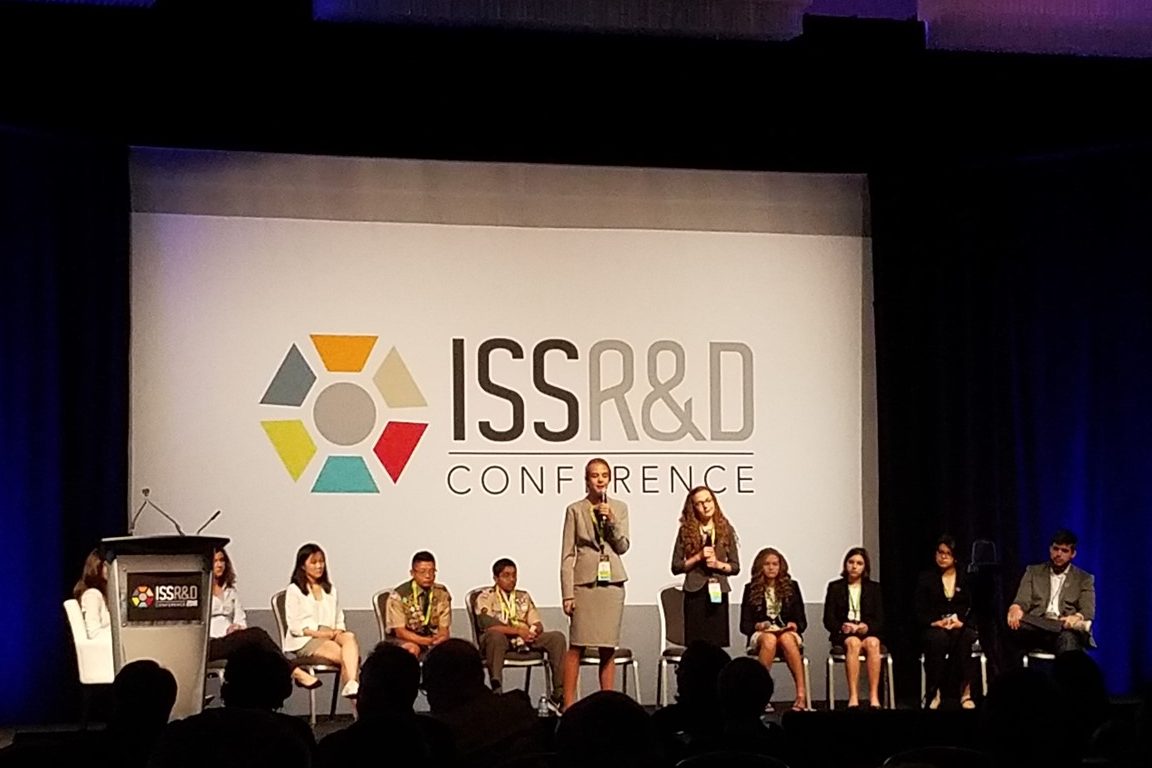