KENNEDY SPACE CENTER, FL. (July 13, 2016) – The Center for the Advancement of Science in Space (CASIS) today announced it has awarded 12 research agreements within the fields of Earth observation, education, physical and life sciences that will provide researchers access to the International Space Station (ISS) U.S. National Laboratory and its microgravity environment. Multiple payloads will originate as ground-based inquiry with the potential to evolve into a follow-on flight project. As the manager of the ISS National Laboratory, the ISS National Lab collaborates with NASA to make the orbiting facility available to researchers whose work would benefit from a microgravity setting and contribute to the improvement of life on Earth.

Below is a list of the research projects that have received awards from the ISS National Lab:

This project will demonstrate the utility of a human nerve-on-a-chip as a model for studying disorders affecting myelin (a substance that surrounds the axon of nerve fibers, forming an insulating layer). This ground-based study will lay the foundation for a follow-on flight project to advance research on demyelinating disorders of the central nervous system (CNS) such as amyotrophic lateral sclerosis (ALS), multiple sclerosis (MS), and Alzheimer’s disease. Developing new methods for translational medical research, such as nerve-on-a-chip technology, in space where cells respond to the absence of gravity could increase the success and efficiency of preclinical studies, reduce research costs, and accelerate time to market.

This ground project aims to analyze, normalize, and consolidate bone data from rodent research experiments in space for open source distribution as standardized control data to aid future researchers working on novel musculoskeletal disease treatments for humans. Bone loss in microgravity is an excellent model for osteoporosis because it is accelerated, progressive, and dose-dependent, yet bone loss equilibrates over long durations of microgravity exposure. This analysis will consolidate key data for use in the drug discovery process to reduce the time and cost needed to bring novel musculoskeletal therapeutics to market.

Visidyne seeks to improve intensity measurements, and subsequently, path predictions of strong tropical cyclones (also known as hurricanes or typhoons) through improved modeling using a measurement technique from the low Earth orbit vantage point of the ISS. For tropical cyclones of interest, a camera is mounted on a selected Cupola window and programmed to capture high-resolution exposures of the storm. The resulting sequence of digitally processed images allows Visidyne to develop algorithms necessary to determine the altitude of the storm’s eyewall clouds which could help reduce the human and financial costs associated with tropical cyclones.

490 Biotech’s reporter-gene system for substrate-free bioluminescent human cell lines is an enabling technology for the evaluation of drug safety and effectiveness. Cellular response to drug samples is observable via visible data acquisition in both tissues and small animal models. The microgravity environment onboard the ISS promotes superior 3-D cell growth conditions, enabling evaluations (using this cell line) that may better mimic the cellular response of human tissues. This investigation will specifically examine anti-cancer therapeutics with downstream applications for other drugs with hopes to validate a novel bioluminescent assay tool kit that may significantly reduce the failure rate and high development cost of current drug discovery efforts.

This project seeks to evaluate a new approach to growing human tissue for transplant that has proven practical in ground-based simulated microgravity. This project will utilize the microgravity environment onboard the ISS to improve cell growth and development and 3-D tissue formation, enabling discoveries that will advance translational disease treatments. Specifically, this investigation will further refine tissue growth processes and identify the role of several cell proteins in growth, development, and disease (specifically, ischemic heart disease). This inquiry aims to impact the patient population by developing methods for transplantation of exogenous stem cells, or mobilization of endogenous cardiac stem cells that may eventually be used to regenerate cardiomyocytes and repair damaged hearts.

This project involves development of a laser communications system for transmitting very large data files— in the range of 10 Gbps to 40 Gbps—from space to the ground. Earth-sensing instruments produce large amounts of data that are currently constrained by the slow uplink and downlink rates of antiquated radio frequency technology, which severely limits space-based operations. Schafer’s next-generation laser communications technology will help increase the uplink rate 10- to 200-fold and the downlink rate 1,000- to 20,000-fold, improving transmission of high-quality remote sensing data from satellite constellations back to the ground. This preflight development project will involve designing and producing of a form fit unit, including all external system interfaces, to support ground and airborne testing.

This study examines the role of the unfolded protein response (UPR) in a mouse model as an important contributor to osteoporosis and muscle atrophy. Untangling this cellular pathway’s connection with musculoskeletal disease will provide important knowledge for developing targeted therapies. Previous experiments have shown UPR’s increased activity in microgravity, making this phenomenon more accessible for investigation in a spaceflight rodent model. In addition to musculoskeletal diseases, over-activation of UPR has also been implicated in neurodegenerative disorders such as Alzheimer’s, Parkinson’s, and Huntington’s diseases.

Investigation: Implantable Nanochannel System for the Controlled Delivery of Therapeutics for Muscle Atrophy

An implantable drug delivery system that circumvents the need for daily injections will be tested in a rodent model with microgravity-induced muscle atrophy. Specifically, the drug formoterol (an adrenalin substitute) will be administered by controlled release from a nanochannel implant to achieve a constant and reliable dosage. If successful, this system could serve as a universal technology for drug delivery in humans to improve drug efficacy. This project is in partnership with Novartis and NanoMedical Systems.

Carbon nanotube (CNT) technology allows for lighter-weight cables that have electromagnetic interference (EMI) benefits over conventional metallic coaxial cables that use a tin-copper shielding braid. Research in low Earth orbit will accelerate the near-term insertion of CNT cables in satellite systems, with a long-term potential for a two-thirds weight savings for CNT coax cables and power harnesses. Exposing this experiment to the extreme conditions on the ISS will provide long-term performance data and showcase DexMat’s ability to design and implement the technology on spacecraft.

Made In Space, Inc.
Michael Snyder
Investigation: Demonstration and Exploration of the Effects of Microgravity on Production of Fluoride-Based Optical Fibers for Science, Technology, Education and Commercialization on the International Space Station

High-performance optical fiber has been extensively used for efficient and compact ultraviolet, visible, and infrared fiber lasers due to its low intrinsic loss, wide transparency window, and small photon energy. This technology enables advances in many different sectors, including medical devices such as laser scalpels and endoscopes, sensors for the aerospace and defense industry, and telecommunications applications. The optical fiber ZBLAN has the potential to far exceed the performance of other fibers in common use. Despite this, the terrestrially produced fiber suffers from glass impurities and microcrystal formation which contribute to scattering and absorption loss, reducing performance. Microgravity has been shown to significantly reduce these imperfections, and production of fibers in space may enable not only improved materials but also a new frontier in manufacturing and space utilization. Researchers have previously demonstrated microgravity as effective at eliminating imperfections in ZBLAN fibers, and Made In Space plans to develop and send its optical fiber production facility to the ISS to produce ZBLAN fibers in space.

Tomatosphere™ is an educational program started in 1999 in which students investigate how the space environment affects tomato plant growth. Each participating class is sent two packages of tomato seeds—one package of seeds that has been sent into space and one package of control seeds that have not been in space. Students and teachers compare the germination rates of the two groups of seeds, not knowing which seeds went to space and which are the control seeds. This project will provide transportation of 1.2 million seeds to and from the ISS (the seeds will remain in orbit between 10 and 60 days). The project will also include monitoring and data tracking (temperature, humidity, and pressure) for both the seeds sent to the ISS and the control seeds. The Tomatosphere™ program has grown from 2,700 classes in 2001 to more than 19,000 classes in 2015. In its 15- year existence, the program has reached approximately 3.3 million students.

Each award is contingent upon the completion of an agreement between the recipient and the ISS National Lab on mutually acceptable terms and conditions. 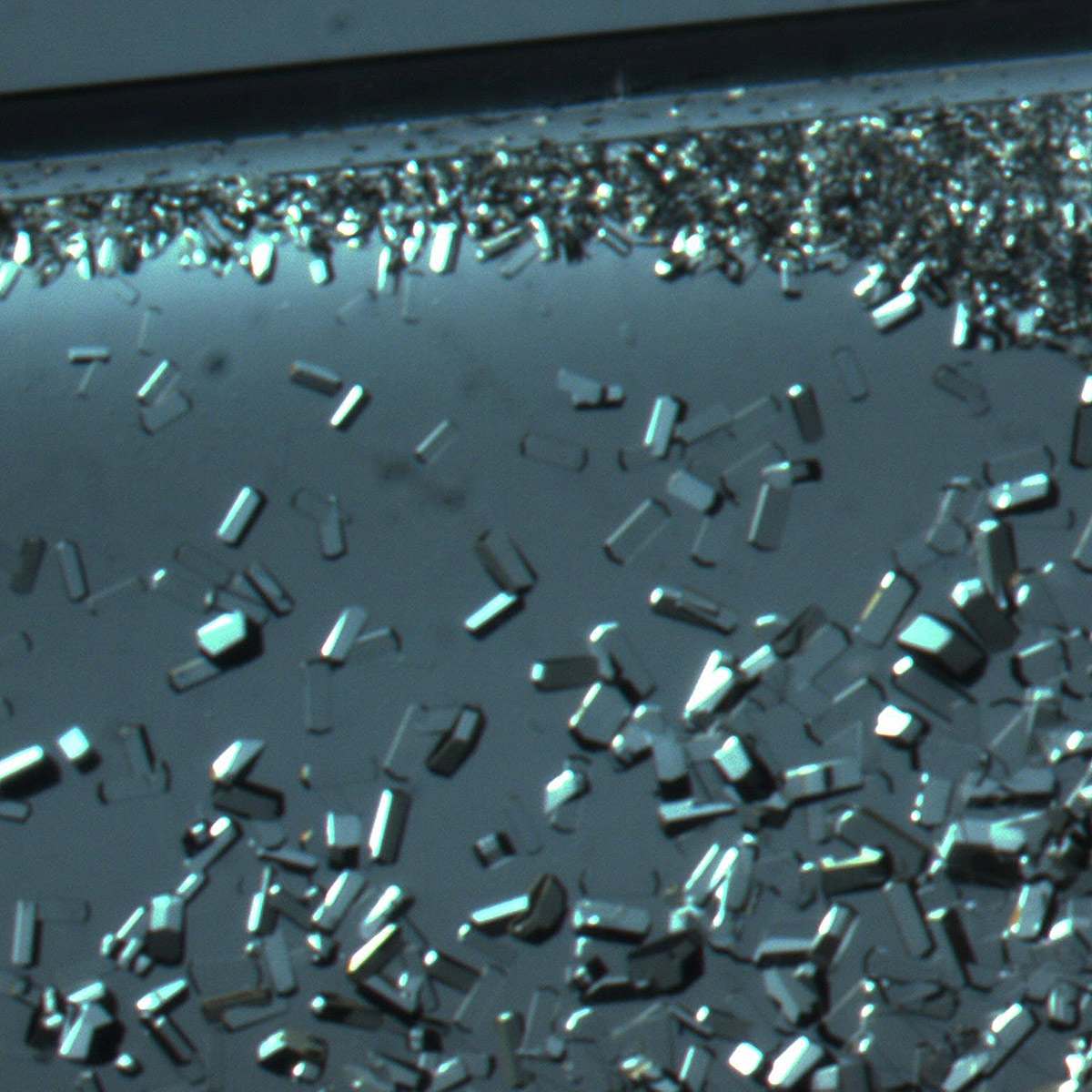