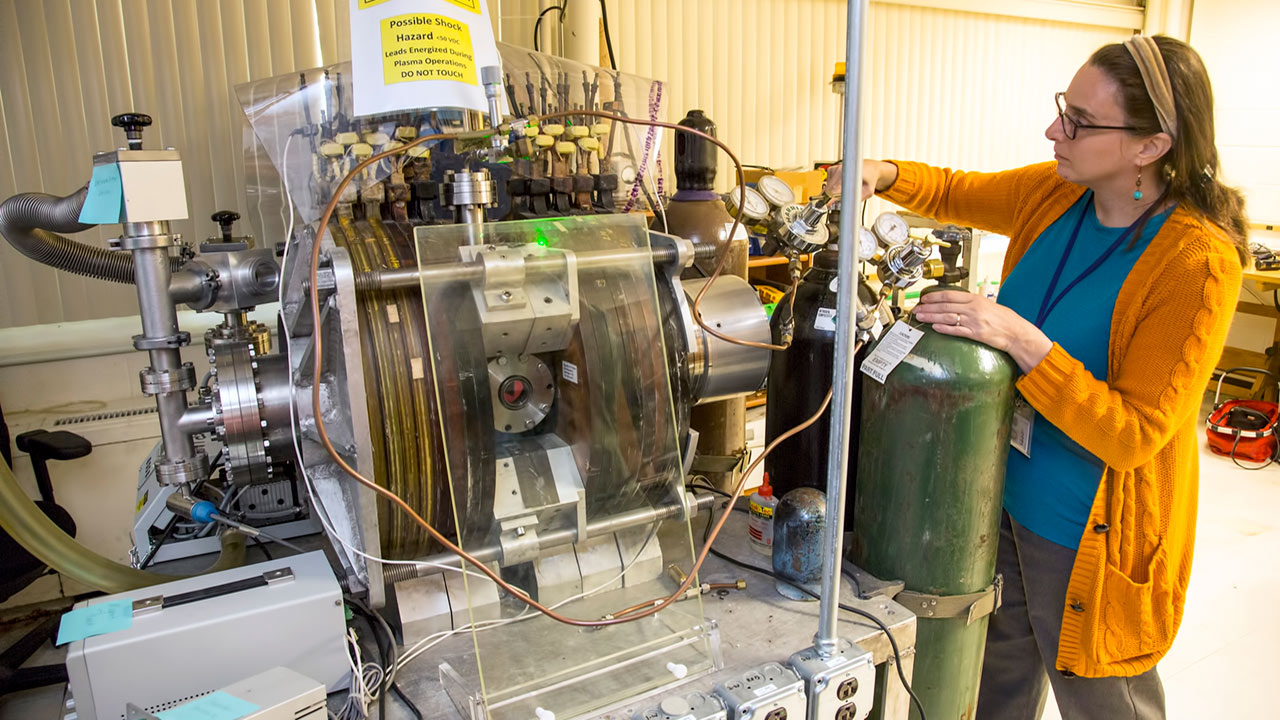 Our hands perform dozens, if not hundreds, of tasks for us every day. They wave hello and goodbye. They open jars, doors, and soda bottles. They button our shirts, put on our makeup, and shave our beards. And often unknowingly, they gesture to add emphasis and nuance to our spoken words. For the majority of us, we take for granted the delicate, precise, and constant duties our hands perform on our command.

Now imagine that you are removed of that luxury; the hands that thanklessly performed these tasks are gone. How do you now navigate the world, and what sort of loss do you experience not only in function, but in expression and personality?

Lenore Rasmussen of Boston has devoted her career to science that enables those with lost limbs to overcome this poignant challenge. As a student, Rasmussen became intrigued by the concept of lifelike prosthetics—and for the past two decades, she has worked in the complex field of materials science and polymer chemistry to explore ways to improve prosthetics and robotics. Recently, her work has led her to a somewhat surprising testing platform: the ISS National Lab, onboard which she can study materials science in ways not possible on Earth. 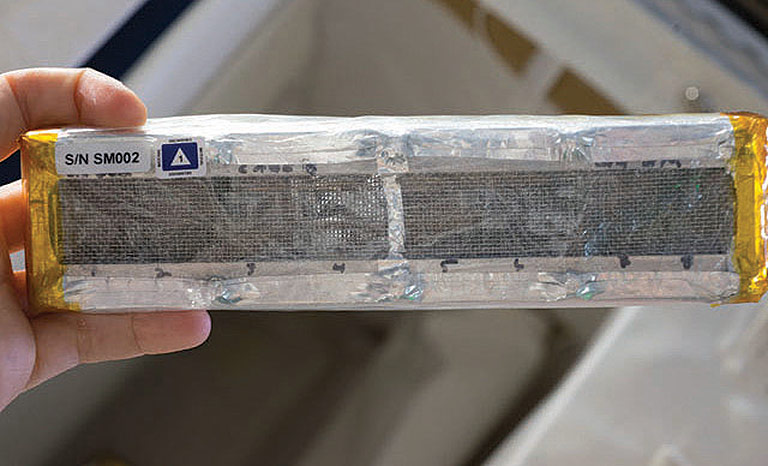 The Promise of Synthetic Muscle™

Rasmussen’s passion is her quest to provide amputees with limbs that look and feel human, allowing not only robust function but also form—the artistic and nuanced movement that gives our appendages (especially our arms and hands) the ability to express emotion. Beginning with self-labeled “basement experiments” after graduate school and subsequently navigating her way through the ambitious community of biotech corporations and start-ups, Rasmussen’s now 13-year-old company, Ras Labs, currently designs and tests Synthetic Muscle™, an electroactive polymer-based product that seeks to enable such humanlike prosthetics.

“I thought there must be a way to bridge the gap between form and function,” said Rasmussen, “a different way of doing motion rather than a purely mechanical approach.”

So she explored a class of “smart” materials called electroactive polymers, which are not only much lighter than metals but also capable of converting electrical potential energy into mechanical motion without pulleys, gears, or motors.

Importantly, Ras Labs seeks to produce these prosthetics without high energy requirements. This feature is critical for their availability and widespread adoption—if a prosthetic can work with a small battery pack instead of a plug-in power supply, the usability for everyday citizens and functionality for military use suddenly becomes a reality instead of science fiction. Moreover, it keeps the cost down—which Rasmussen emphasizes is critical, because the places prosthetics are often most needed globally are places where people cannot afford them. 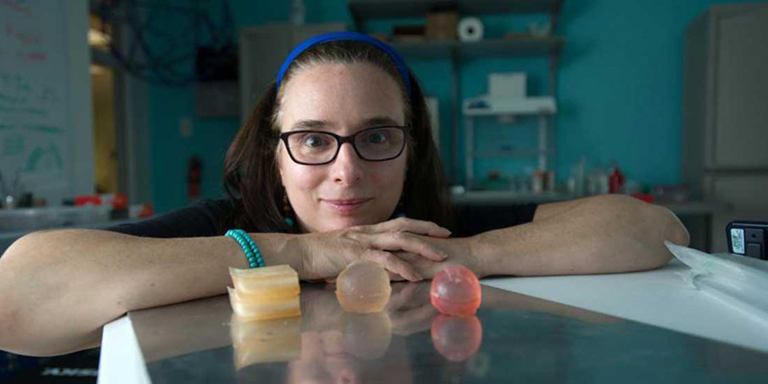 Going into business was not easy for Rasmussen. She patented her discoveries and even authored a book on electroactive polymers, but her goals were always about science, discovery, and patient quality of life. In fact, she originally explored forming a nonprofit instead of a startup LLC—and she may still go that direction someday. But in 2003, she began the difficult journey of taking on partners and navigating her way through the business world as founder and chief technology officer of Ras Labs, LLC.

“In the beginning, I just wanted to see if some of my crazy ideas would work,” Rasmussen said. So she started by looking at the bending of electroactive polymers, “zapping” everything she could. True to form for great discoveries, the first example of her polymers contracting instead of merely bending—giving Rasmussen the hope of biomimetic motion—happened in 2007 and was “basically a mistake in the lab,” she said. “It was a very picky synthesis, so it took some work to figure out!” Luckily, the later generations of Synthetic Muscle™ are stronger, much easier to produce, and are scalable.

Perhaps ironically, her quest for humanlike motion has made Rasmussen’s work attractive to the robotics industry, which also seeks low-power, lifelike function of artificial appendages. Contrary to Hollywood’s portrayal of robots and cyborgs that are practically indistinguishable from humans, it is surprising what real-life mechanical and electronic components struggle to do—for example, turn a doorknob.

“In the first experiments testing a robot’s ability to open a door, the robots fell over,” said Rasmussen. “We take for granted how easy it is, but turning, oblique-type motion with our hands is very complex.” The work in diagonal motion Ras Labs is exploring through the use of electroactive polymers lends itself well to solving these kinds of issues in the robotics industry.

The Ras Labs mission has thus become slightly more broad over the years—and as Rasmussen and her team expanded their goals from enabling everyday human tasks to pushing the limits of what their Synthetic Muscle™ can do for a non-human entity, they began to take their materials to the extremes.

A Fly on the Wall of the ISS 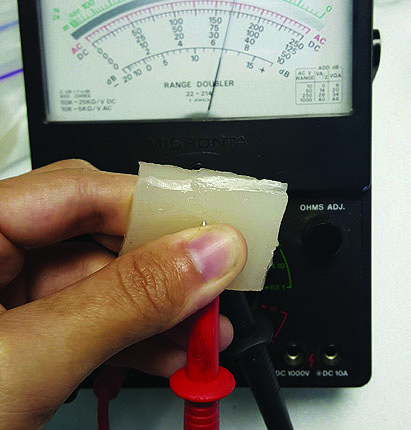 To determine whether Synthetic Muscle™ could function under stresses beyond what would be asked of a human, Rasmussen’s electroactive polymers have been through a lot in the past 13 years.

In addition to being zapped by a wide range of electrical shocks, they have been chilled to a cool -271 °C, compressed by extreme G forces and pressures, and assaulted by a radioactive pellet of cesium-137 (at the U.S. Department of Energy’s Princeton Plasma Physics Laboratory at Princeton University). And now, most recently, they have been Velcro-ed to the wall of the ISS for more a year—finally returning home to Boston on June 1 after splashing down on May 11 in a Dragon capsule returning from the ISS.

The ISS testing (mainly assessing cumulative radiation exposure effects, which are present at constant low levels even in the interior of the station) will help Rasmussen determine whether robots using Synthetic Muscle™ can be sent into environments that humans either cannot enter for safety reasons or would not want to stay for long. It is obvious to see the benefits of such durability for spaceflight applications—limiting astronaut extravehicular activity would certainly be beneficial for long-term space travel—but the benefits for ground-based use are also compelling. For example, robot emergency response could save many lives in situations too dangerous for humans to act, such as inside nuclear power plants.

In this initial spaceflight experiment, various investigational additives and coatings related to Ras Labs polymers were passively exposed to the internal ISS environment, which induced changes in the materials. These changes will allow the Ras Labs team to analyze the behavior of the test materials after exposure to the specialized ISS radiation environment. While the bulk of the analyses have just begun (pH testing, material integrity, microscopy, and electroactivity), initial postflight observations and crew photography from in orbit (i.e., changes visible to the naked eye) indicate that the spaceflight results are unique from previous ground-based radiation testing. Further analysis will reveal more specifics, but Rasmussen indicated that the ISS exposure in some cases demonstrated accelerated “aging” or degradation of samples compared with ground controls.

“Being on the ISS was pretty remarkable,” said Rasmussen, “And it looks like we’ll have some really cool, interesting results.”

The inaugural Ras Labs payload to the ISS was elegant in its simplicity. Additives and coatings for the Ras Labs custom polymers, selected for robustness based on ground-based radiation testing, were placed in tiny containers, sent up on SpaceX-6 in April 2015, and stuck to the interior wall of the ISS—using minimal power, upmass, and crew time by staying inside and requiring minimal manipulation. Two thermoluminescent dosimeters recorded radiation exposure on the ISS and on the ground duplicate controls.

These results alone could help reveal unknown characteristics, including strengths and weaknesses, of the very specialized polymers Ras Labs creates and tests—which could enable design of new materials with improved features for a number of purposes (including those unrelated to spaceflight). Moreover, Rasmussen has greater plans following this initial foray into spaceflight R&D.

The Power of Spaceflight Research

Following on the heels of her promising first experiment in space, Rasmussen seeks to perform more robust spaceflight R&D that takes full advantage of the ISS environment. While passive radiation exposure is expected to yield exciting results for her team, the benefits of performing active interrogations of polymer function in microgravity onboard the ISS platform opens the door to even more revealing inquiries. 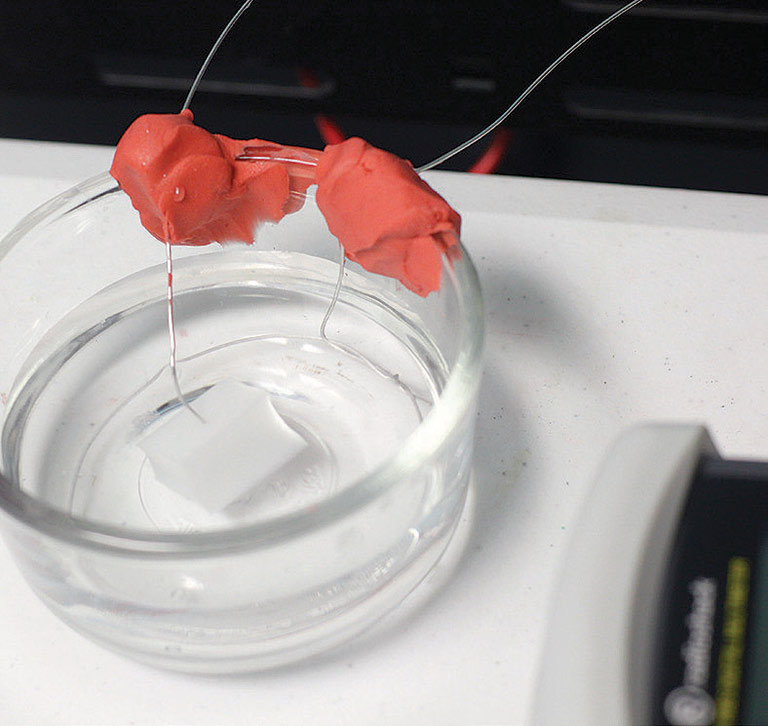 The functional absence of gravity onboard the ISS affects the structure, properties, and behavior of materials, including physical, chemical, electrical, thermal, and magnetic characteristics. These effects stem primarily from differences in fluid dynamics in space—removal of sedimentation, buoyancy-driven convection, and other phenomena that dominate fluid motion and behavior on Earth. In the absence of these phenomena, scientists are able to unmask underlying characteristics of materials and critical clues to their behavior and properties that otherwise might never be observed or understood through ground-based studies.

Ras Labs’ introduction to spaceflight research came in 2013, when Rasmussen entered a competition run by MassChallenge (a global business accelerator that offers both funding and practical support). There, Rasmussen was awarded a grant through a CASIS partnership with MassChallenge—earning her an opportunity to fly her research to the ISS National Lab.

By testing the function of Synthetic Muscle™ in future materials science investigations in microgravity, Rasmussen expects to observe expansion and contraction that is more uniform, which could reveal completely new information about Ras Labs’ materials. These types of studies will inform the underlying, fundamental basis upon which Ras Labs technology is built, potentially taking the company’s product to whole new levels. This brings Rasmussen back to her core goals: innovative science that can improve patient quality of life.

“We need to keep up with the other new, cool developments in the industry,” Rasmussen said. For example, “self-sensing,” in which mechanical compression can elicit changes in the response and properties of a material. This type of feedback could enable a feature beyond only form and function: a sense of touch. Ras Labs is still working toward the seemingly simple but truly complex prosthetic hand, and Rasmussen believes that an autonomous human-like hand with actuation (including finger movement and grasping functions) is within reach for Ras Labs within five or six years.

“Our hands are close to our face; they define us as humans,” said Rasmussen. “It might be a small market, but I didn’t go into business to make a million and sit on a beach— I wanted to make something that people can use.”

Along with continuing to explore spaceflight R&D, Ras Labs initiated agreements with the Department of Defense and Department of Energy, and was awarded funding through the Food and Drug Administration for a project administered through the Philadelphia Pediatric Medical Device Consortium and Children’s Hospital of Philadelphia that is pushing the first Ras Labs product onto the market: a shape-morphing polymer pad system for prosthetic liners and sockets.

Patient comfort is adversely affected by the common issue of poorly fitting prosthetics, which causes slippage, discomfort, and even breakdown of human tissue. Ras Labs’ contracting and expanding polymers are helping to address this issue by improving and maintaining fit, allowing patients to maintain a full active lifestyle. 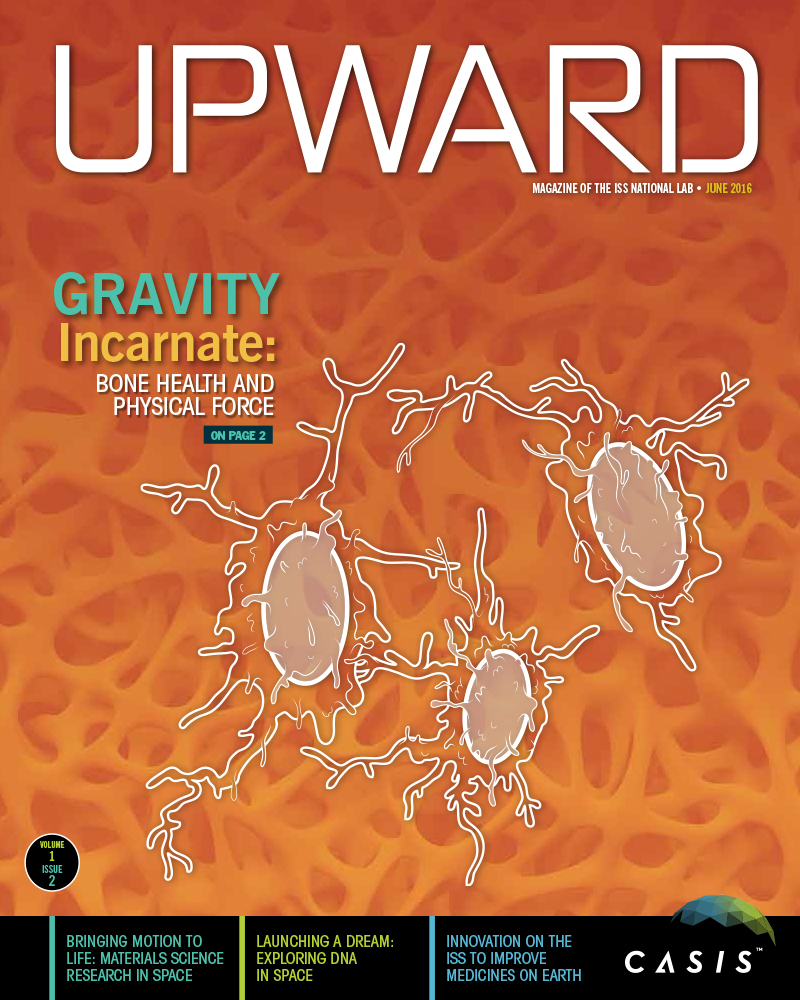