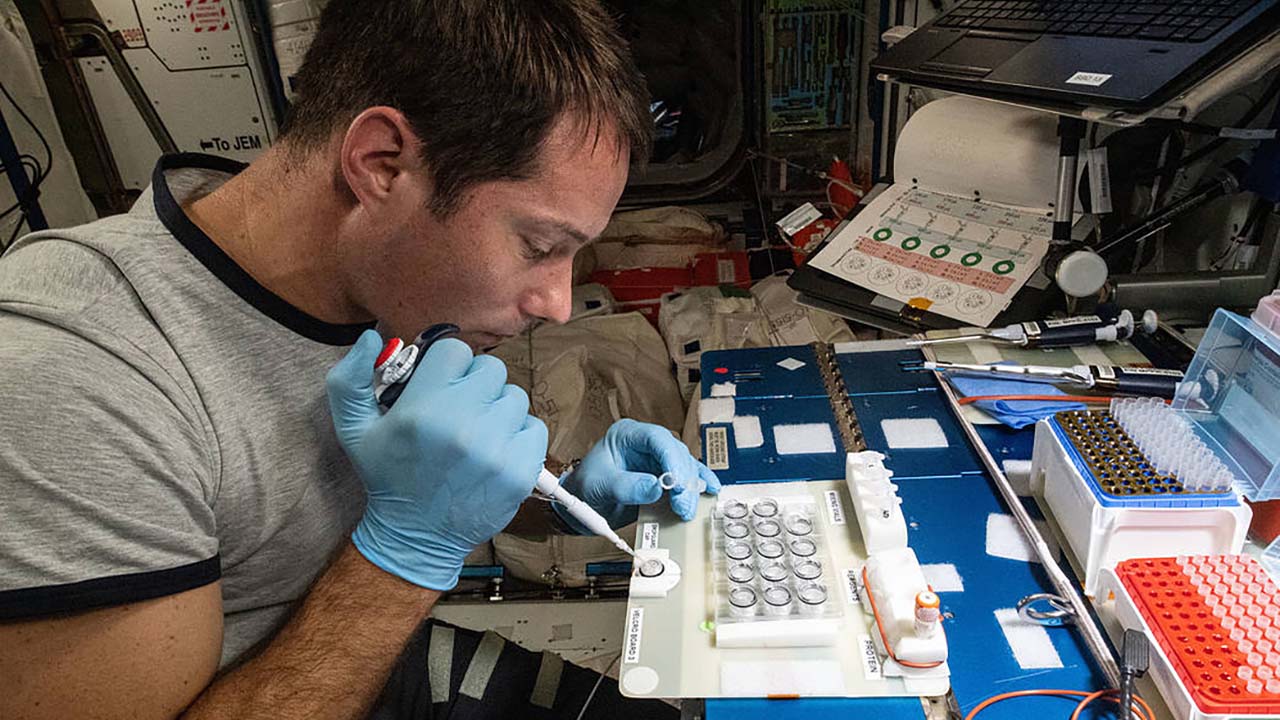 Most of this year’s peer-reviewed publications (citations for which can be found in Appendix E) were related to investigations funded through joint solicitations with NSF and NIH, with the majority focused on aspects of tissue engineering and regenerative medicine. Peer-reviewed journal articles such as these are a critical means to disseminate findings from fundamental R&D activities. Journal publications not only advance scientific knowledge but also lend credibility, prestige, and merit to investigators who test hypotheses and demonstrate the capabilities of research platforms such as the ISS.

Further bolstering the ISS National Lab focus area of regenerative medicine, the Cell Press publishing company released a special collection of 23 articles on the biology of spaceflight. Several of these articles mentioned ISS National Lab R&D, and one was authored by ISS National Lab staff highlighting open-source spaceflight data. Additionally, a perspective paper was published in Preprints discussing the goals and outcomes of a Biomanufacturing in Space Symposium co-hosted by the ISS National Lab and the University of Pittsburgh’s McGowan Institute for Regenerative Medicine. The symposium gathered more than 130 thought leaders in regenerative medicine and space-based R&D as a first step in developing a roadmap to establish a sustainable biomanufacturing market in LEO.

FY21 peer-reviewed publications include the following:

Additionally, in FY21, biotechnology company Emulate, Inc. filed a patent related to its Intestine On-Chip, developed in part through company’s NIH-funded Tissue Chips in Space research. This marks the second patent Emulate has filed for this technology. Additionally, the company released its commercially available Brain-Chip this year, also developed through Tissue Chips in Space research. The Brain-Chip provides a model to study diseases involving neuroinflammation, such as Alzheimer’s and Parkinson’s, and to test potential new therapeutics. Emulate plans to fly a version of the Brain-Chip to the space station in another ISS National Lab-sponsored investigation scheduled to launch in FY22.

To support the full R&D life cycle (from fundamental research to product commercialization), multiple ISS National Lab solicitations were released in FY21. On the front end of the research life cycle, two FY21 NSF-sponsored solicitations continued to support fundamental science that leverages the persistent microgravity environment of the ISS to advance scientific discovery for the benefit of Earth. Beginning in 2016, CASIS has partnered with the NSF Engineering Directorate on these annual research solicitations, including six solicitations in the physical sciences area of transport phenomena (2016 through 2021) and four solicitations in the biomedical area of tissue engineering and mechanobiology (2018 through 2021). In total, these solicitation cycles have resulted in the award of 38 NSF peer-reviewed proposals representing 40 payloads—and the infusion of more than $22 million of non-NASA grant funding to the principal investigators via the NSF grant awards and funding for the Implementation Partners supporting their spaceflight investigations.

In support of the later stages of product development, CASIS released a new series of NLRAs during FY21 to advance ISS National Lab R&D strategic focus areas. One NLRA sought flight projects within applied research and development, translational science, technology readiness level maturation, and technology demonstrations. Two additional NLRAs were focused on in-space production applications, one in advanced manufacturing and materials and the other in tissue engineering and biomanufacturing. Another NLRA was centered on STEM education, specifically focusing on digital engagement and higher education. In total, $3.4M  was set aside in support of these new initiatives, and during FY21, 25 projects were awarded under these NLRAs. (For a full list of FY21 solicitations, see Appendix A. For a full list of selected ISS National Lab-sponsored projects, see Appendix F).