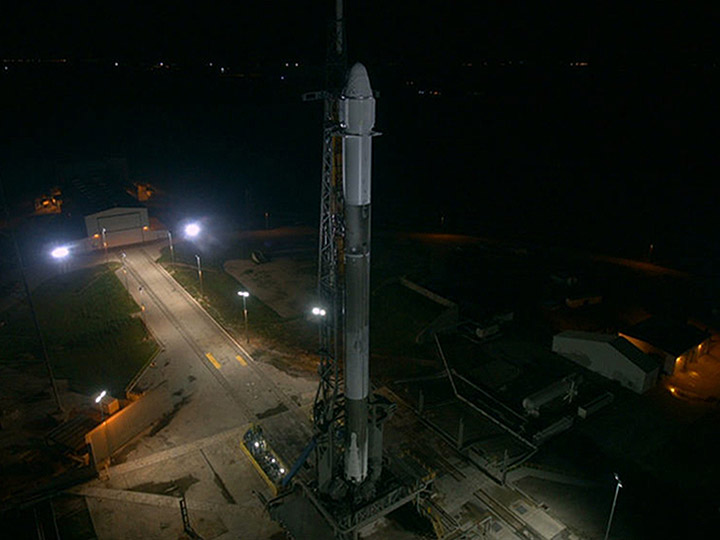 KENNEDY SPACE CENTER (FL), November 27, 2018 – SpaceX is targeting no earlier than December 4 at 1:38 p.m. EST for its 16th commercial resupply mission (awarded by NASA) to the International Space Station from Launch Complex 40 at Cape Canaveral Air Force Station. SpaceX’s Dragon spacecraft will bring approximately 300 kilograms of research and hardware facilities to the orbiting laboratory under the International Space Station (ISS) U.S. National Laboratory flight allocation. There are more than 20 payloads included on this mission sponsored by the ISS National Lab. This mission represents the largest number of payloads ever delivered to the ISS National Lab during a single launch to the orbiting research platform. The payloads that are part of the ISS National Lab flight manifest represent a diverse group of research investigations intended to benefit life on Earth.

Included on this mission is a protein crystal growth investigation from Frederick National Laboratory for Cancer Research that will utilize microgravity to crystallize the KRAS gene—mutations of which account for many cancers, including 95 percent of pancreatic ductal adenocarcinoma, one-third of non-small cell lung cancer, and up to half of colorectal tumors. An investigation from LambdaVision, a startup funded through the MassChallenge Startup Accelerator partnership with Boeing, seeks to improve the quality and efficiency of the manufacturing process for a protein-based retinal prosthetic that aims to restore vision to the millions of people blinded by retinal degenerative diseases. Another startup, Tympanogen, utilizing NanoRacks’ Reactor Microplates, seeks to leverage the microgravity environment on the space station to improve the process of antibiotic release from a novel patch created to treat wounds and reduce the occurrence and severity of sepsis, or systemic inflammation.

This mission also will include the first in a series of five investigations utilizing tissue chip systems — a research technology that reflects the human body —funded through the National Center for Advancing Translational Sciences (NCATS), which is part of the National Institutes of Health. Through its Tissue Chips in Space initiative, NCATS supports the use of tissue chip technology for translational research onboard the ISS National Lab to benefit human health on Earth. This first tissue chip investigation, led by researchers at the University of California, San Francisco, will use tissue chip technology to examine the relationship between immune aging and healing outcomes.

Budweiser will send its third experiment to the ISS National Lab, this time examining strains of barley seeds as they go through the processes of steeping (rapid hydration), germination, and kilning (drying) associated with malting barley. Results from this research could help the company develop new malt barley varieties that are more tolerant to extreme stress environments and could also provide valuable insight for the general agricultural community. Also on this mission is an investigation from Nalco Champion, an Ecolab company, that seeks to study bacterial biofilm behavior as it relates to microbial corrosion toward mitigation of corrosion in oil and gas equipment.

Lastly, multiple investigations are intended to inspire the next generation of scientists and engineers. Two of the student payloads on this mission are in partnership with Marvel Entertainment as part of the Guardians of the Galaxy Space Station Challenge. For the challenge, students around the country were encouraged to submit flight concepts based on the attributes of characters Rocket and Groot from the Guardians of the Galaxy franchise. In association with Team Groot, high school student Sarnia Kopf and teammates from Lakewood High School in Colorado plan to look at aeroponic farming in microgravity (with engineering support from Space Tango). In association with Team Rocket, high school student Adia Buwala from Greeneville, Tennessee will examine the effectiveness in microgravity of a dental glue that is activated by UV light (in collaboration with DreamUp and hardware partner NanoRacks). Also in the areas of outreach and education, a partnership between Felix & Paul Studios, an award-winning creative studio, and TIME will capture footage for a groundbreaking cinematic virtual reality series documenting life onboard the space station.

To learn more about all the payloads on SpaceX’s 16th commercial resupply mission sponsored by the ISS National Lab, please see the mission overview at SpaceX CRS-16 Mission Overview.

About the International Space Station (ISS) U.S. National Laboratory:
In 2005, Congress designated the U.S. portion of the ISS as the nation’s newest national laboratory to maximize its use for improving quality of life on Earth, promoting collaboration among diverse users, and advancing science, technology, engineering, and mathematics (STEM) education. This unique laboratory environment is now available for use by non-NASA U.S. government agencies, academic institutions, and the private sector, providing these customers access to a permanent microgravity setting, a powerful vantage point in low Earth orbit, and the extreme and varied environments of space. The ISS National Lab is managed by the Center for the Advancement for Science in Space, under agreement with NASA.