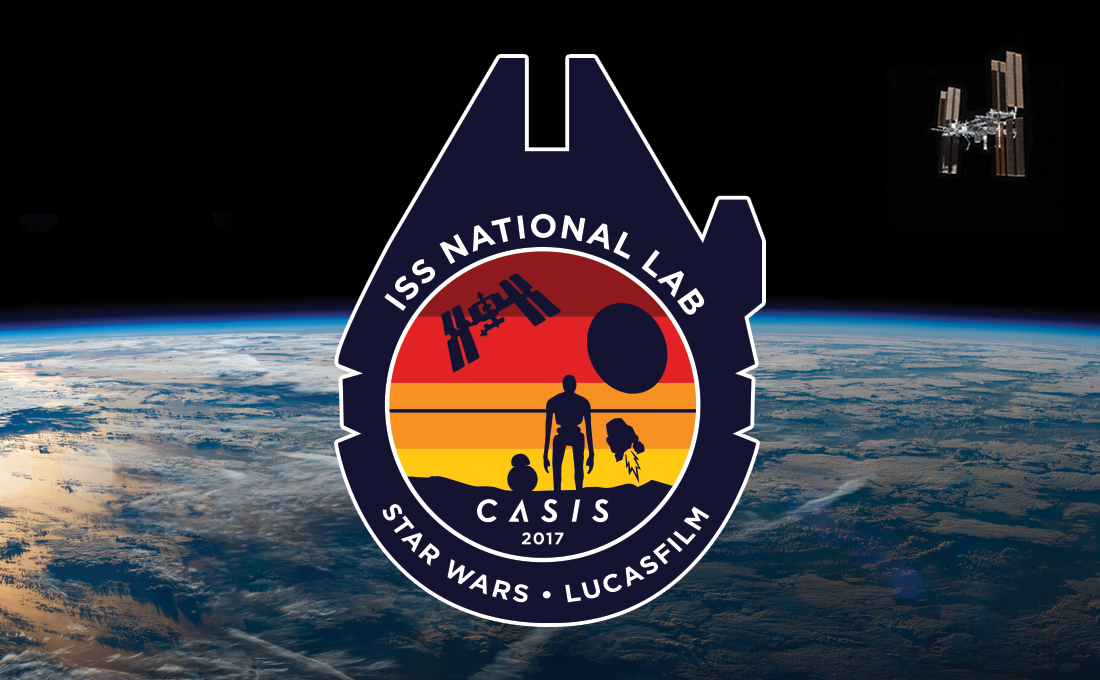 Kennedy Space Center, FL (September 6, 2017) — The Center for the Advancement of Science in Space (CASIS) today announced the unveiling of its latest mission patch, designed by Lucasfilm, featuring characters and space ships from the Star Wars™ franchise. The mission patch represents all payloads intended for the International Space Station (ISS) U.S. National Laboratory in calendar year 2017. CASIS is the organization that oversees research on the ISS U.S. National Laboratory  benefitting life on Earth.

“This collaboration connects the scientific promise of the International Space Station to the scientific inspiration of the iconic Star Wars TM franchise,” said CASIS President and Executive Director Gregory H. Johnson. Thus far in 2017, CASIS has seen well over 100 experiments launch to the space station ranging from life and physical sciences, Earth observation and remote sensing, to technology development and education payloads.

Working with Fortune 500 companies, innovative startups, esteemed academic institutions, other government agencies and non-profit organizations, CASIS is enabling a new era of space-based research and through this partnership with Lucasfilm, will better inform the public on how the station is benefitting our planet.

Lucasfilm recently announced “Science and Star Wars,” a 10-episode web series designed in collaboration with IBM to engage the public on the science associated with the Star Wars universe. Coming soon, an episode from this series will be dedicated towards space ships, and the ISS will be prominently featured as it represents our only orbiting laboratory manned by humans. The episode will include a former astronaut who has flown on the ISS, and also highlight the types of research and facilities that are associated with the space station.

The patch has the outward shape of the famed space ship – the Millennium Falcon, and features the ISS, droids BB-8, K-2SO, and Chopper, as well as the Death Star. The patch was developed by Academy Award-winning designer, Doug Chiang, who is responsible for overseeing concept artistry and production design for films in the Star Wars series, including the latest release; Star Wars:The Last Jedi, in theaters December 15.

“One of the reasons George Lucas created Star Wars was to inspire a sense of romance and adventure of space exploration for a new generation of space explorers,” says Lucasfilm’s Star Wars Vice President and Executive Creative Director Doug Chiang. “The patch design is meant to evoke this same spirit of wonder when Luke Skywalker looked out to the twin suns of Tatooine. The silhouetted droids and ISS set against a sunset sky with echoes of the Death Star and Millennium Falcon – two iconic Star Wars vehicles that still captivate us – reflect this memorable scene.”

“We are incredibly excited to link the inspiration brought by Star Wars to our International Space Station, highlighting research that is happening right now in space,” Johnson added.

To learn more about this collaboration, please watch the making of the mission patch video here: https://www.youtube.com/watch?v=5TsGOuT9xoA

To understand the on-orbit capabilities of the ISS National Lab, including research initiatives launched in 2017, visit ark5.issnationallab.org.