This was our initial reaction to Nickelodeon’s Slime in Space project onboard the International Space Station (ISS). But then we thought—while the idea of sliming an astronaut in space might be fun, sending such a large amount of highly viscous liquid to the space station is so unique, you’d be nuts not to try to learn as much as you can about it. So behind the scenes, that’s exactly what we tried to do.

We asked the astronauts on the ISS to perform a variety of demonstrations with the slime that would provide scientific data for comparison with predictions from theories about liquid behavior in a low-gravity environment. We are always looking for “limiting cases” with which to benchmark our numerical and theoretical analyses, and slime establishes a certain “viscous limit.” Fortunately for us, NASA astronauts Christina Koch and Drew Morgan and European Space Agency astronaut Luca Parmitano were excited about exploring the limits. 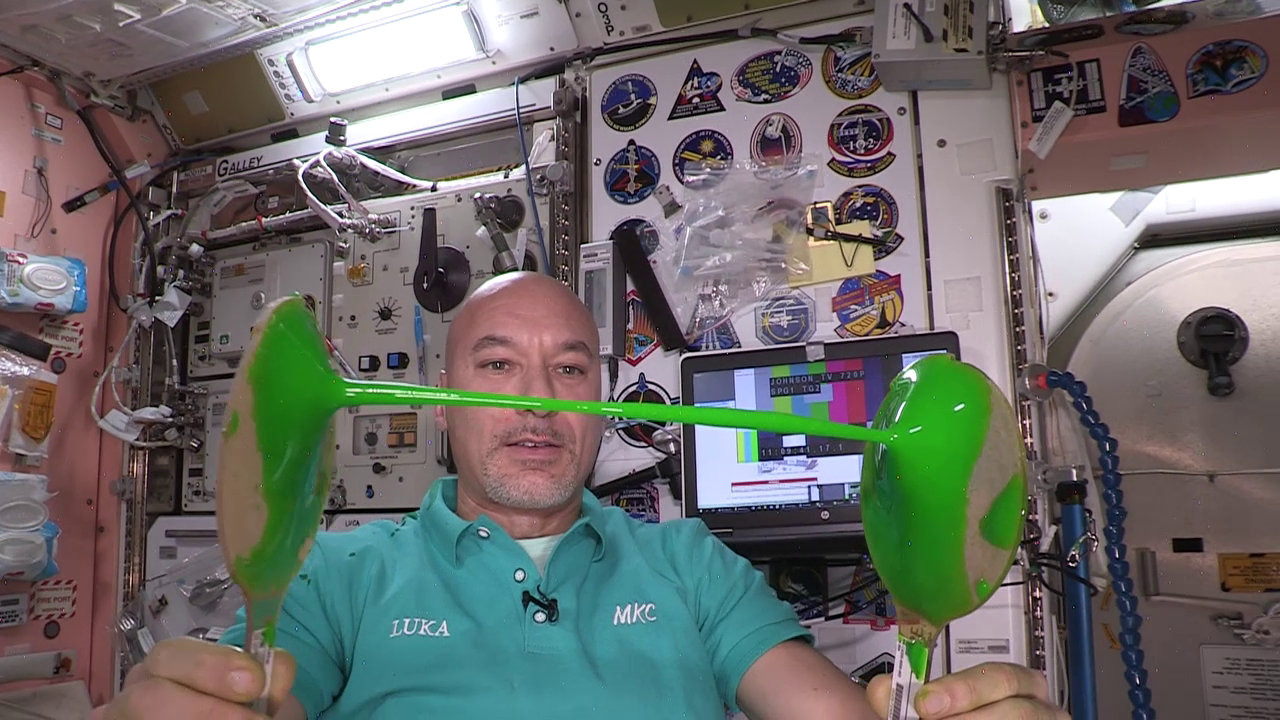 Despite working and living in space onboard ISS for nearly 20 years now, our collective understanding of how liquids behave in orbit remains rather limited. Gravity makes handling liquids easy, or maybe we’re just used to it since we’ve had billions of hours of practice. In microgravity, however, liquid management is incredibly difficult. When you take away gravity, bubbles no longer rise, droplets no longer fall, and equipment that involves liquid—such as boilers, condensers, plant watering systems, blenders, or even beakers—do not work.

So how can we keep learning more about liquids in space? Our answer is to play with liquids in space as much as possible. Slime is a liquid, and Nickelodeon sent it to the ISS, so we played with it!

The Science Behind the Slime

Slime and water share similar liquid properties, such as density, contact angle, and surface tension, but the viscosity of the slime sent to the ISS is approximately 20,000 times greater than water. The slime, along with a set of super-hydrophobic ping pong paddles that repel water, were launched to the space station on SpaceX’s 18th commercial resupply services mission last summer.

Density is a measure of a substance’s mass per unit of volume.

Contact angle is the angle at which a liquid meets a solid surface. Contact angle can be used to measure a surface’s wettability (how easily a liquid is deposited on a surface).

Viscosity is a measure of a liquid’s resistance to motion when a force is applied.

At least eight demonstrations were designed for ISS crew members to do to highlight the impact of the slime’s fluid properties and to potentially slime an astronaut. The astronauts videoed the demonstrations for researchers and students back on the ground to learn about slime in space.

1. Slime Blob: The crew dispensed similar amounts of slime and water and observed the behavior of the two as the blobs floated around the ISS cabin.

2. Slime Spin: The crew attempted to spin blobs of water and slime. The water continually oscillated with a high amplitude and frequency unless stopped by the paddle. Whereas the slime’s high viscosity caused it to deform and rotate like a solid, enabling us to determine the slime’s surface tension. When the crew disrupted the rotation, surface tension quickly drew the slime into a sphere.

3. Slime Cutting: The crew attempted to cut the slime using dental floss. The slime didn’t split and quickly recovered its shape. The slime wet the dental floss, which could then be used to move the blobs around in the cabin, like a ball on a string.

4. Slime Bubbles: The crew used a large syringe to inject air into a slime blob to create a thick-film slime bubble.

5. Slime Collision: A slime blob, held conveniently in front of Parmitano, was hit by a jet of slime expelled from a syringe. In the first attempt, the slime jet merged with the blob. In the second attempt, a higher-velocity jet burst through a large slime bubble, creating a donut-shaped slime blob. The slime jet passed straight through—resulting in Parmitano having the honor of being the first astronaut to be slimed in space!

6. Slime Paddleball: Despite the slime having a nearly identical wetting condition (i.e., contact angle) as water, when attempting to manipulate the slime using the super-hydrophobic paddle, the slime appeared to stick to the surface of the paddle, unlike water. The viscosity of the slime overtook inertia when trying to “flick” the slime off the paddle, resulting in remarkable 3D standing waves. The parallel demonstrations Nickelodeon did on the ground showed how gravity overcame viscosity, causing the slime to eventually roll off the paddle without leaving a trace.

7. Slime Jets: An additional high-velocity jet of slime was shot on an angled super-hydrophobic paddle, which redirected the jet, resulting in the sliming of Koch!

8. Slime Balloons: Two balloons filled with different volumes of slime were popped. Depending on the location where the balloon surface was pricked with the pin, the slime inside the behaved differently as the balloons burst. In Nickelodeon’s ground-based demonstrations, gravity pulled the slime down when the balloons were popped, but in space the slime held together.

9. Bonus—Slime Sandwich: In a spur-of-the-moment demonstration, Parmitano put a large amount of slime between two of the super-hydrophobic paddles and pulled them apart at different speeds. This demonstrated that large-scale viscosity dominated liquid draining and bridge rupture, which incredibly produced symmetrical satellite slime droplets.

Advancing Both Science and STEM Education

These seemingly simple science demonstrations provide valuable scientific data on liquid behavior in low gravity, and we plan to publish and present as much of the results as possible. Such data informs the analysis and design of new space technology and space-based research. This data can also be applied to work around low-gravity droplet production, mitigation, and containment and will help inform continued work concerning general liquid containment and transport, CO2 and wastewater processing, and hydroponic plant watering in space—and much more.

The Slime in Space demonstrations also serve as a powerful education tool. We did not predict everything that happened with the slime in space. Science is fun, and watching astronauts play with slime while doing science demonstrations is a great way to engage millions of kids around the world in important science, technology, engineering, and mathematics (STEM) concepts. And, of course, everyone enjoys seeing astronauts get slimed in space!