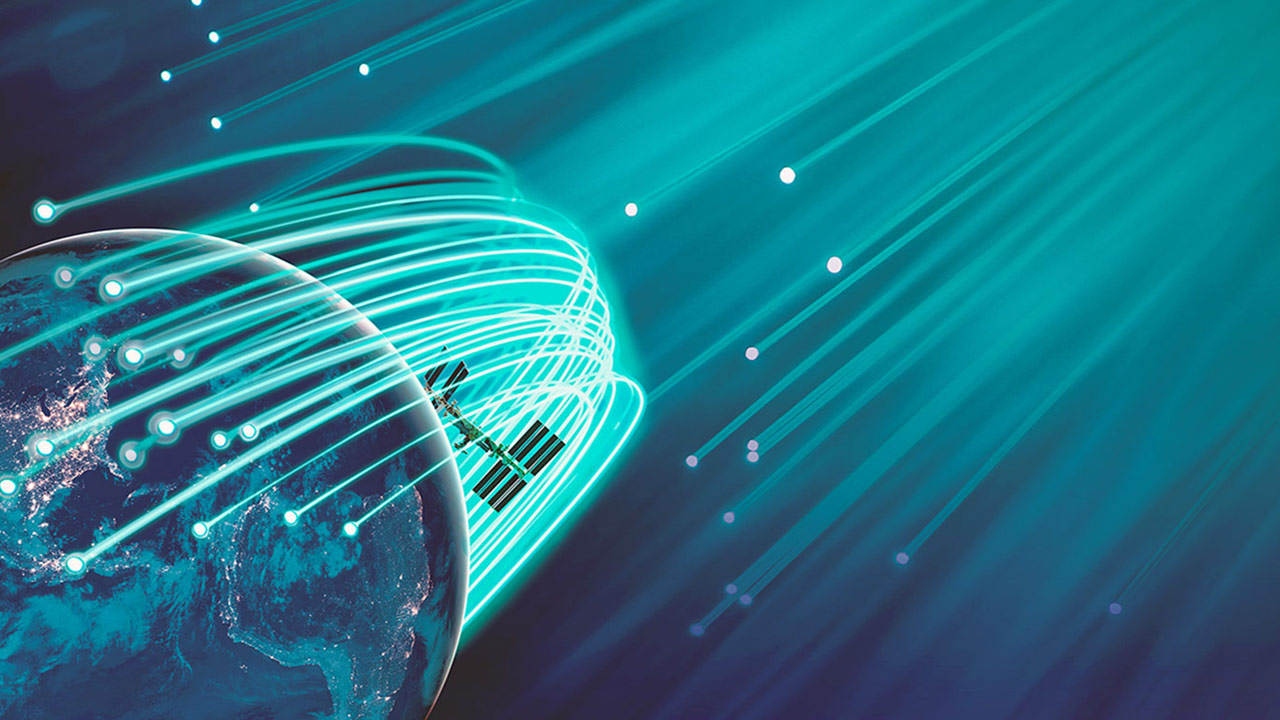 Optical fibers are the thread that connects our modern digital world. Smaller in diameter than a human hair, these fibers can transmit light pulses of information at billions of pulses per second and over distances of several thousand kilometers, eclipsing what is possible with electrical cables.

These optical fibers are most commonly made of silica (SiO2) glass. While silica fibers are easily produced using well-established methods, optical losses in the fiber requires the use of expensive repeaters to boost the signal across long transmission distances.

The fluoride glass optical fiber, ZrF4-BaF2-LaF3-AlF3-NaF, commonly known as ZBLAN, at its theoretical best can have 10 to 100 times lower signal loss than silica fiber. However, when ZBLAN is produced on Earth, convection and other gravity-driven phenomena can cause imperfections because of the nonuniform distribution of the various chemical components within the fiber. These defects that occur during the process of solidification result in the formation of microcrystals that render the fibers unusable for many commercial applications.

The history of ZBLAN takes us back to 1974 in Rennes, France, when Professor Marcel Poulain of the University of Rennes and his brother Michel accidentally discovered this series of heavy metal fluoride glasses. Four years from their revolutionary find, the brothers formed their own company Le Verre Fluoré, putting the duo at the forefront of specialty fiber production.

However, interest in ZBLAN diminished in the 1980s because no one could pinpoint how to prevent microcrystals from forming in the fiber during production. These crystals greatly reduce the transmission ability of the fiber, making it unsuitable for many applications.

But ZBLAN was too great a revolution to disregard. That is why the U.S. Air Force and the U.S. Naval Research Laboratory started the research back up again in the 1990s, including parabolic arc test flights on NASA’s KC-135 aircraft. On these flights, ZBLAN glass experiments were run during the 22-second period of aircraft freefall. Although these few seconds were not enough to produce proper fiber, they were enough to obtain promising preliminary test results.

To avoid the adverse effects of gravity, scientists have turned to the ISS National Lab to produce ZBLAN fiber in microgravity.

High-performance ZBLAN fibers would be extremely valuable back on Earth, and several commercial companies such as Fiber Optics Manufacturing in Space (FOMS), Made In Space (MIS), and Physical Optics Corporation (POC) are currently pursuing in-orbit production of ZBLAN fiber. Initial results have been promising, and successful ZBLAN fiber production on the ISS National Lab could pave the way for future large-scale commercial manufacturing of ZBLAN in low Earth orbit. 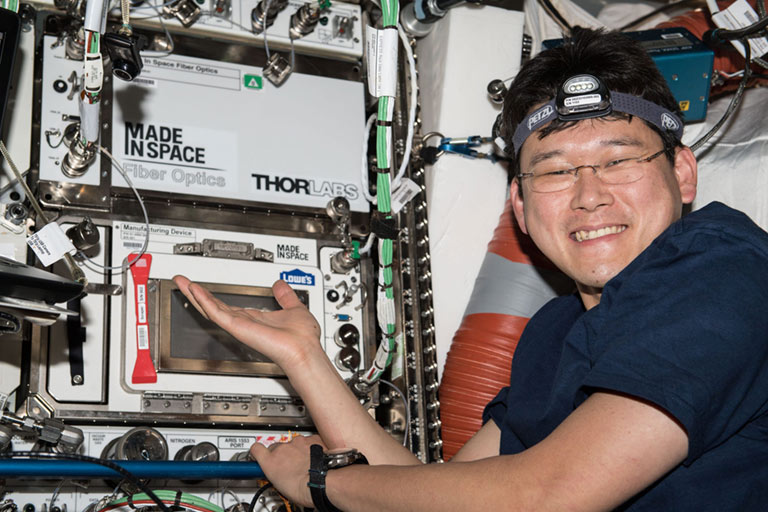 The MIS Optical Fiber Production in Microgravity (OFPIM) payload atop the Additive Manufacturing Facility with JAXA astronaut Norishige Kanai onboard the ISS. 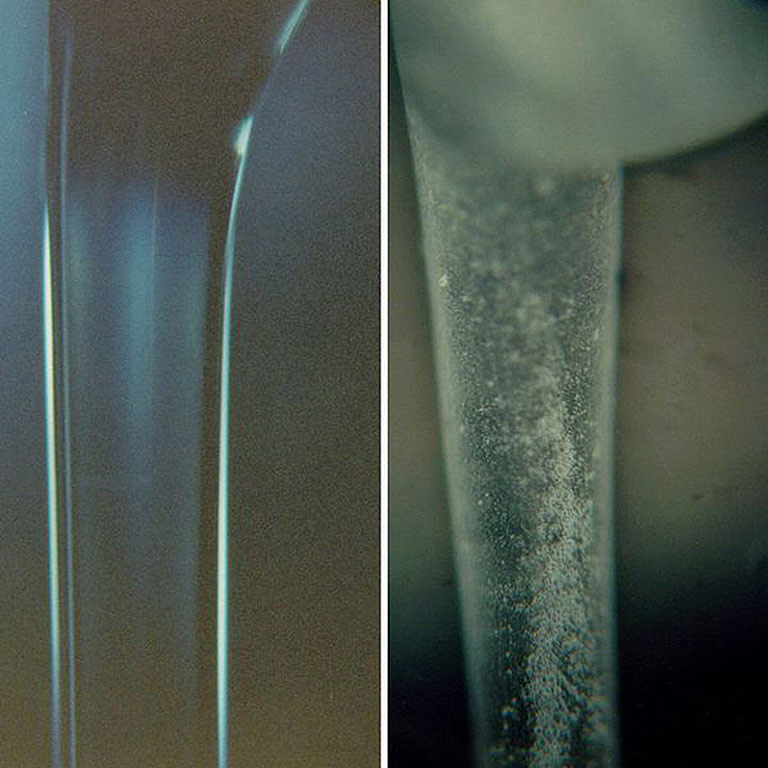 To understand why microgravity is preferable over normal gravity for ZBLAN production, it is important to understand what about Earth’s gravity causes defects in the fibers. The production process on Earth involves draw towers that can be up to several stories tall. At the top of the tower is a preform, a large-diameter rod of the glass mixture, which is heated up so that a bead of glass falls, pulling a glass fiber behind it. Reaching the bottom of the tower, the fiber is wound on a spool to continue the draw from the preform. The whole process has been compared to that of pulling taffy.

When scientists talk about defects in ZBLAN optical fibers, they are mainly referring to crystallization and phase separation within the fibers. Due to convection-induced effects in molten ZBLAN glass, as well as other reasons researchers are still trying to determine, ZBLAN optical fibers made in Earth’s gravity are prone to having crystals form during the transition from a molten liquid state to a solid-like state.

“ZBLAN is desirable for many applications because it has a very large wavelength transmission window; even the current fibers with defects from ground production are used for transmission of infrared light,” said Michael Snyder, chief engineer and cofounder of MIS. “In theory, if you could suppress most or all of the crystallization in ZBLAN, the advantages of ZBLAN fiber, which include repeaterless transoceanic transmission of light, are huge compared to silica fiber.”

Using estimates for the theoretical loss limit of ZBLAN glass, a 2,000-km length of ZBLAN fiber could have the same optical loss as 10 km of silica fiber, which would be an extraordinary performance gain.

Because ZBLAN is made of five different elements (zirconium, barium, lanthanum, aluminum, and sodium) while silica fiber consists of only silicon dioxide, phase separation (boundary layers in the microstructure of a material) is more prevalent due to zirconium, barium, and lanthanum being denser than aluminum and sodium. Microgravity helps minimize this effect as well.

“It’s sort of like your favorite ice cream with a bunch of toppings inside,” Snyder said. “If you let that ice cream melt on Earth, all that heavy stuff sinks and the light stuff floats, and the same thing happens with fiber. In space, those density-related separations don’t happen.”

The Path to ZBLAN Production on the ISS

Before taking ZBLAN production to the ISS National Lab, POC used parabolic flight studies to test microgravity’s effects on ZBLAN production and optimize their hardware. “Results were encouraging,” said Ranjit Pradhan, vice president of applied technologies at POC. “The cross section of the glass pulled during parabolic flights was significantly more homogeneous than glass pulled on the ground.”

These promising results led to the development of POC’s Orbital Fiber Optic Production Module, which is scheduled for launch to the ISS on SpaceX’s Commercial Resupply Services (CRS)-17 mission in 2019. POC will first operate the system in microgravity to identify any unknown factors that could adversely affect the in-orbit production of high-quality ZBLAN fibers. Once optimization of the system is complete, the company plans commercial operations for in-orbit fiber manufacturing.

Similarly, FOMS leveraged its knowledge of past studies in the development of ruggedized hardware to develop the Space Facility for Orbital Remote Manufacturing (SpaceFORM), for which the company has an issued U.S. patent. SpaceFORM is intended to serve as not only a proof of concept but also a platform for volume production of optical fibers in microgravity. 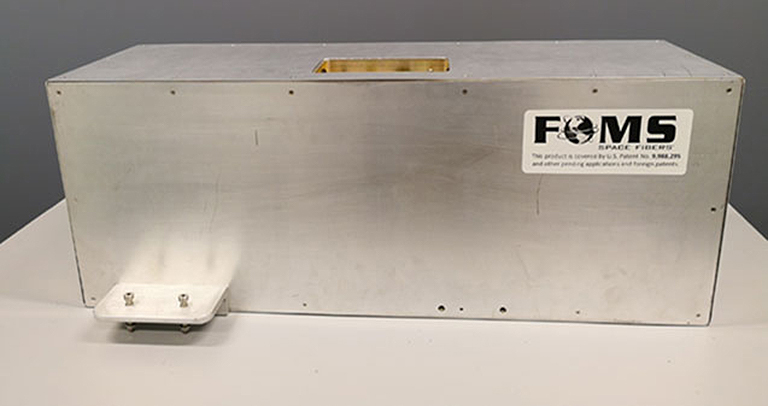 The FOMS Space Facility for Orbital Remote Manufacturing (SpaceFORM) experiment, supported by the ISS National Lab, NASA, the Small Business Innovation Research program, and private funding, is scheduled to launch on SpaceX CRS-17. SpaceFORM, which is covered by an issued U.S. patent, is capable of producing up to 50 km of optical fiber in a single flight.

“We were able to commercialize the hardware development and scientific development on the materials side even before we were able to bring our hardware and experiments to an orbital platform, which is quite exciting,” said Dmitry Starodubov, chief scientist at FOMS. “Our ultimate goal is to scale up production and commercial revenue and to establish a sustainable manufacturing platform in orbit through use of this technology.”

SpaceFORM, which is capable of multi-kilometer fiber production, is scheduled to launch to the ISS on SpaceX CRS-17 in 2019, after which FOMS plans to conduct several in-orbit experiments aimed at testing and optimizing their hardware. FOMS hopes to gain insight into the fundamental physics of material processing in microgravity and the improvement pathways for the properties of the fiber produced in orbit. This knowledge will help in operationalizing a commercial in-orbit optical fiber manufacturing facility.

For MIS, successful parabolic flight testing led to the development of the company’s initial demonstration optical fiber puller, which launched to the ISS on SpaceX CRS-13 in December 2017. As part of their multi-flight Optical Fiber Production in Microgravity (OFPIM) experiment, this first investigation from MIS focused on evaluating the puller’s temperature settings. 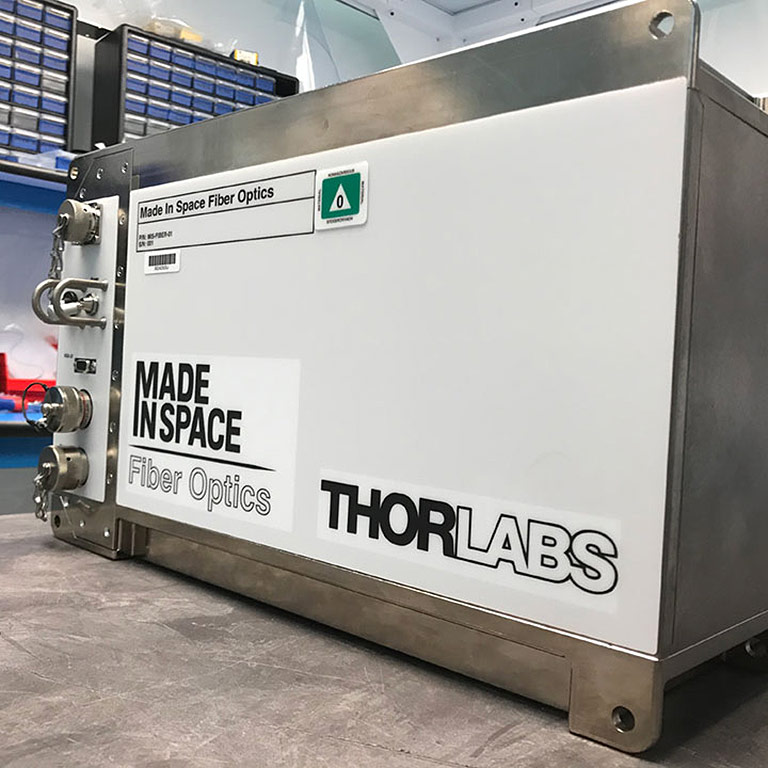 The OFPIM hardware is entirely automated, which holds great promise for long-term commercial use due to the minimal crew time needed for unloading and plugging in samples—but perfecting the operation of the industrial process itself takes iteration. To this end, a second investigation from MIS that launched on SpaceX CRS-14 in April focused on testing several approaches for fiber-pulling techniques, and a third investigation on SpaceX CRS-15 in June further optimized the industrial process settings. A fourth investigation that launched on Northrop Grumman CRS-10 last month seeks to shift from pulling only test-length fibers to pulling fibers reaching up to 100 m in length for analysis.

This shift from validation to production of fibers for characterization and attenuation is an important step toward optimizing the OFPIM for commercial production of ZBLAN fibers in space for use back on Earth. The fibers pulled in testing so far have not been long enough for critical evaluation, but according to MIS, preliminary visual analysis of the fiber’s microstructure indicates an absence of the level of microcrystallization and flaws typically seen in terrestrially produced fiber.

Commercial Interest and the Future of Space Manufacturing

The core technology needed to produce commercial quantities of ZBLAN in microgravity is currently in development, and FOMS, MIS, and POC are each fine-tuning their methods of drawing optical fibers in space. For now, the ISS is the ideal platform to support the current level of space-based ZBLAN production. However, depending on the growth of the industry, the future could involve a new ISS module specifically dedicated to fiber pulling or even a new station or other platform for optical fiber manufacturing in low Earth orbit.

“The ISS is a great learning tool for mastering production of ZBLAN fibers,” said Pradhan. “It offsets some of the risks in developing these sorts of high-value optical materials for the commercial sector.”

However, before large-scale commercial ZBLAN production in space can really take off, in-orbit manufacturing must become price competitive. “We are thankful to the ISS Commercial Space Utilization Program Office for funding this unique opportunity,” said Pradhan. The current round-trip costs of launching cargo to the ISS, performing experiments and procedures, and sending the cargo back down are prohibitive without NASA and the ISS National Lab subsidizing costs. According to Starodubov, though, this may not always be the case. 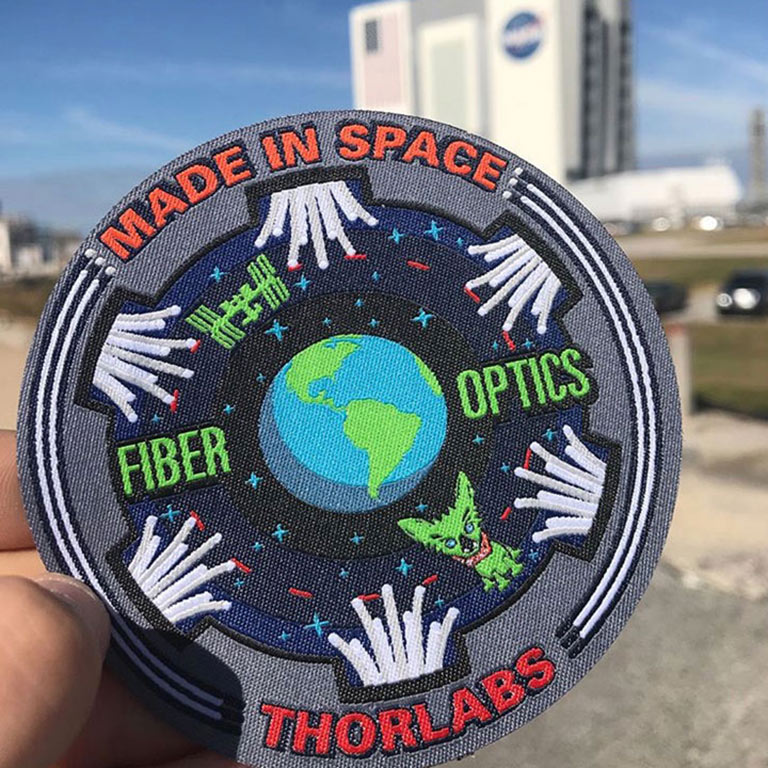 The MIS OFPIM mission patch from the SpaceX CRS-13 launch.

“The ongoing revolution of the space industry is making orbital processing amazingly affordable,” said Starodubov. “The costs will be dropping from the existing space trip cost, which is comparable to the price of platinum per kilogram, by roughly a factor of 10 in the near future.”

As costs start to come down, in-orbit manufacturing will become more accessible to smaller companies. And as more companies get involved, whether through the production of ZBLAN or other products, the cost of flying and returning cargo will continue to be driven further down, spurring an expansion of commercial manufacturing of products in space that have high value back on Earth.

In terms of the future Earth benefits of space-produced ZBLAN, Pradhan said that “given that ZBLAN performs closest to the theoretical best, space fibers could be used to wire up different continents.” Trans-oceanic telecommunication lines currently made of silica optical fibers could be replaced with high-performance microgravity-produced ZBLAN fibers.

“With such low optical loss,” said Pradhan, “the world could be connected like never before.”

At the annual ISS Research and Development Conference in July, MIS won the 2018 International Space Station Innovation Award in Physical Sciences and Materials Development for their innovative work on ZBLAN optical fiber production in microgravity. 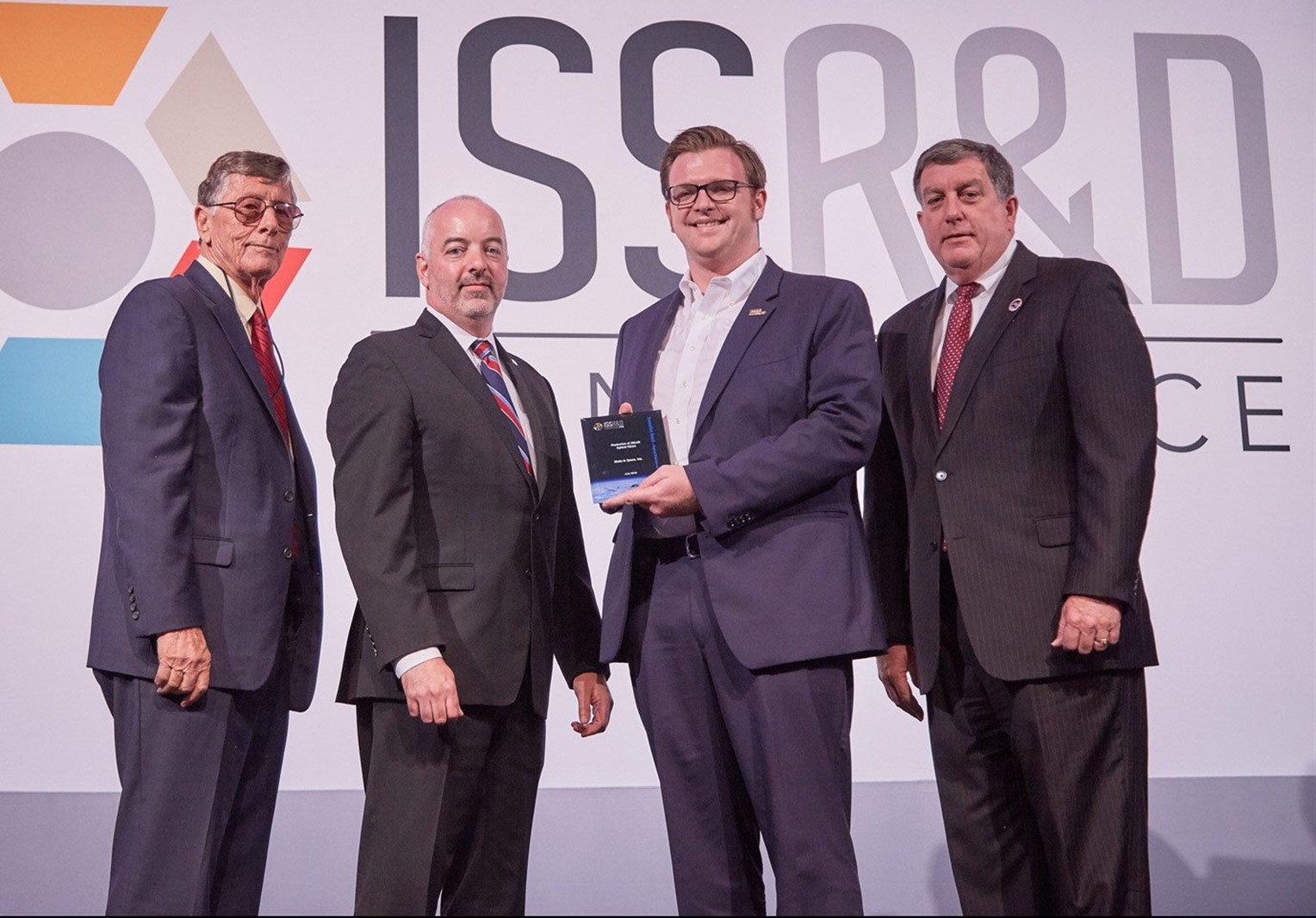 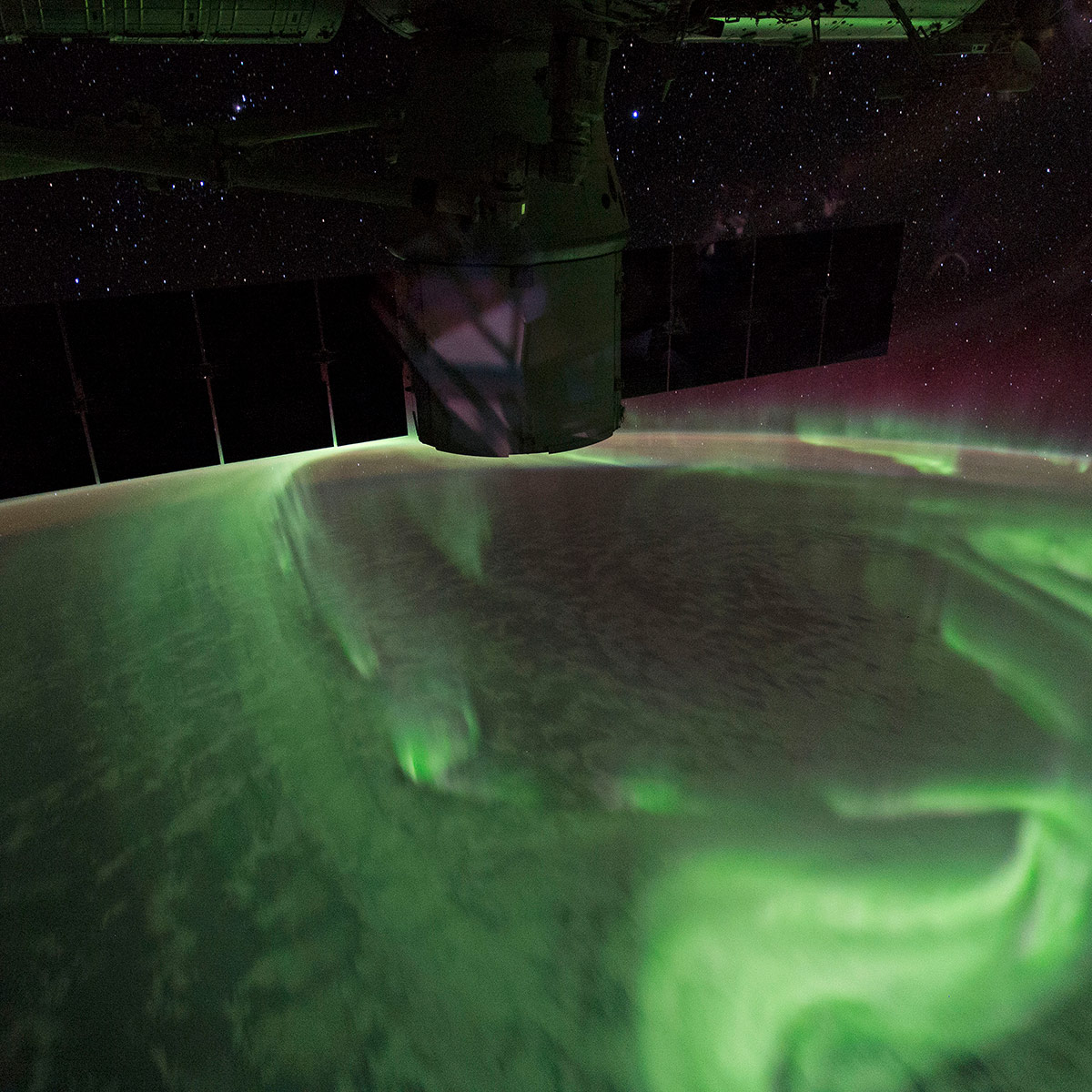