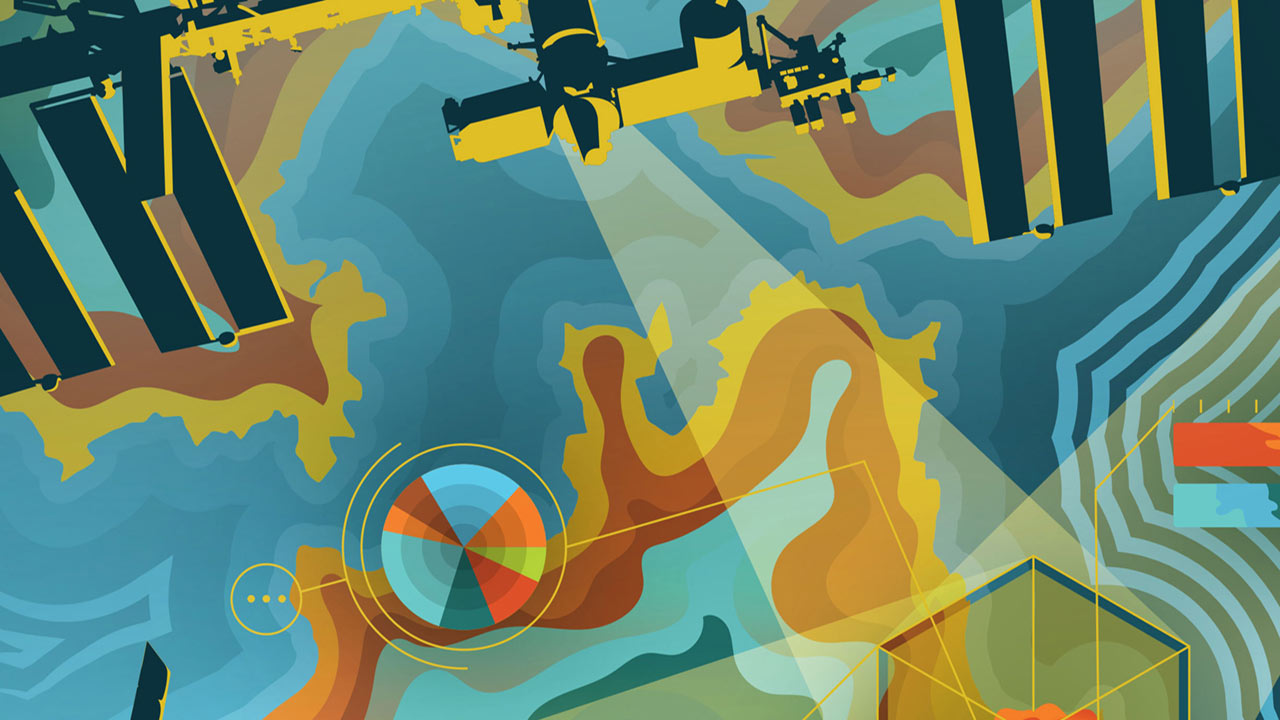 For millennia, humans have looked up to the sky to find constellations of stars, wondering what mysteries they hold. Today, we live in a world where constellations of satellites look down on us, hoping to unravel mysteries as well—by capturing highly complex images of Earth.

In the commercial remote sensing market, the imaging of Earth from space has experienced a technical tsunami, giving rise to a population explosion of smaller but far more capable satellites with new sensing and communication capabilities. In the near future, constellations of nano-, micro-, and other small-sats will swarm low Earth orbit like drones filling the skies on Earth.

Despite the tiny size their names imply, these small satellites produce “big” data, the technical term for data sets so vast and complex that highly complex processing algorithms are required to analyze and interpret the meaning behind them. The images these satellites produce of Earth are not simple visible-light photographs—they are multi- and hyper-spectral images bursting with data. Thus, in parallel to this satellite baby boom is an ever-growing need for evolution in data processing.

The Power of Earth Imaging From Space

Imaging of Earth from space has existed for decades. However, the ISS is in a unique orbit and has its own particular advantages, different from that of traditional Earth-viewing satellites.

The most difficult images to process—whether taken from the ISS or from traditional satellites—are those of coastal zones, where typical analyses that are effective for land-only or water-only images fall short. HICO, though now retired from use on the ISS, was the first space-borne imaging spectrometer designed to study these difficult coastal areas.

There is a strong international community interested in ocean color sensing, said HICO Project Scientist Curtiss Davis, and coastal regions are a particularly complex challenge for this community. “The more wavelengths we use for imaging and the higher spatial resolution we can achieve, the more complete understanding we can gain,” said Davis.

HICO was a pathfinder for hyperspectral imaging of these optically complex coastal waters. However, HICO still posed unique image analysis challenges, and improvements to algorithms were essential for processing data from HICO. Moreover, developments in satellite technology are also driving a need for timely solutions to these data processing hurdles.

The Rise of the Geospatial Application Market

In addition to the complexities of coastal imaging data, the remote sensing field is at a transition point in history. Earth imaging used to be performed by only government satellites or very expensive commercial satellites. Now that getting to space is easier and less costly, the diversity and availability of data are expanding exponentially—via ISS imaging platforms, the booming new industry of small satellite constellations, and even drone technology.

In the old way of doing things, only experts in the field performed the capture and analysis of Earth images from space. A specialist would specifically develop context-dependent and dataset-specific algorithms for a certain set of images, as needed.

“In essence, only those of us with the right computers and the right tools could do it,” said Davis. “We needed a way to readily provide the results—to make HICO data much more widely used and to keep up with the vast amount of spectral info we can now collect.”

Today, advances in satellite technology mean that big data is making its way into the hands of the larger community. To prepare for the wealth of information that is coming with planned sensors on the ISS and beyond, rapid innovation in computing technology is paramount.

“It's the democratization of low Earth orbit,” said HySpeed Computing President James Goodman. “We now have the ability to access a volume and variety of data that was never before available.”

However, the power of data generation continues to outpace processing capabilities. This opened the door for a business opportunity—the creation of new applications to perform these processing tasks.

HICO IPS As a Proof Of Concept

HICO IPS is a trailblazer for what can be done through a next-generation image processing application. As an online image analysis tool, it is a prototype for how the geospatial application market can tackle big data and provide accessibility to the global community.

“HICO IPS runs complex algorithms in a web application,” said Goodman. “With this ‘computing in the cloud’ approach, it’s possible to make data analysis available to everyone.” Individual algorithms can be plugged into such applications in a modular fashion based on customer needs—where both the algorithms and derived products can be bought and sold in this emerging market.

As a web application, HICO IPS combines commercial and open-source software layers into an enterprise system that runs in the cloud, generating results on-demand per the user’s request. This type of online image processing was practically unheard of five years ago, but now the market is exploding—and HICO IPS serves as a demo to the remote sensing community.

“When we show HICO IPS to our customers, they immediately see the value of accessing data through a web application,” said Amanda O’Connor, business development manager at Harris Corporation. These customers are users of coastal remote  sensing data—a diverse group ranging from commercial fisheries to public health organizations concerned with tourism.

“With HICO IPS, users need no prior knowledge of image acquisition or processing, and the tool needs no calibration,” said O’Connor. “All our customers need is to say ‘this is my area of interest—show me something about it.’”

By running the HICO IPS plug-in algorithms on a collection of example HICO imagery, one can evaluate various aspects of water quality in different coastal regions. Through this image analysis, customers can readily see how such information could be used to decide on prime fishing locations, for example, or the potential need for a swim advisory.

“Remote sensing data allows decision-making in a real-time and meaningful way—but only if you can quickly interpret the data,” said O’Connor. “With the HICO IPS application, even users without any industry expertise can still get meaningful answers quickly. It’s a very simple interface.”

HICO is no longer producing real-time images, but the HICO IPS framework is applicable to other remote sensing instruments, including future imagers on the ISS as well as on other satellite and airborne platforms.

“Based on the positive user feedback we’ve received, we can re- use this architecture to access and catalogue details from other systems,” said O’Connor. “The bigger question Dr. Goodman was asking was ‘how can I make this data useable for everyday people?’ And HICO IPS is a success in that. It’s bringing science to the lay person who may not even know how to ask the questions.”

Goodman says he envisions a remote sensing future where the line between local and cloud computing becomes obscured, where scientific achievements and innovations are readily shared through a distributed processing network, and where image-derived information is rapidly distributed through web applications. “The CASIS- sponsored HICO IPS project and resulting web application represents an important contribution toward realizing this goal,” he said.

“HICO IPS bridges the gap between the theoretical science mission of the ISS and something people can consume and use,” added O’Connor. “As a taxpayer, that makes me happy. This application is bringing return on investment to the public who helped finance the space station. That really underscores the relevancy of the ISS as a National Lab.” 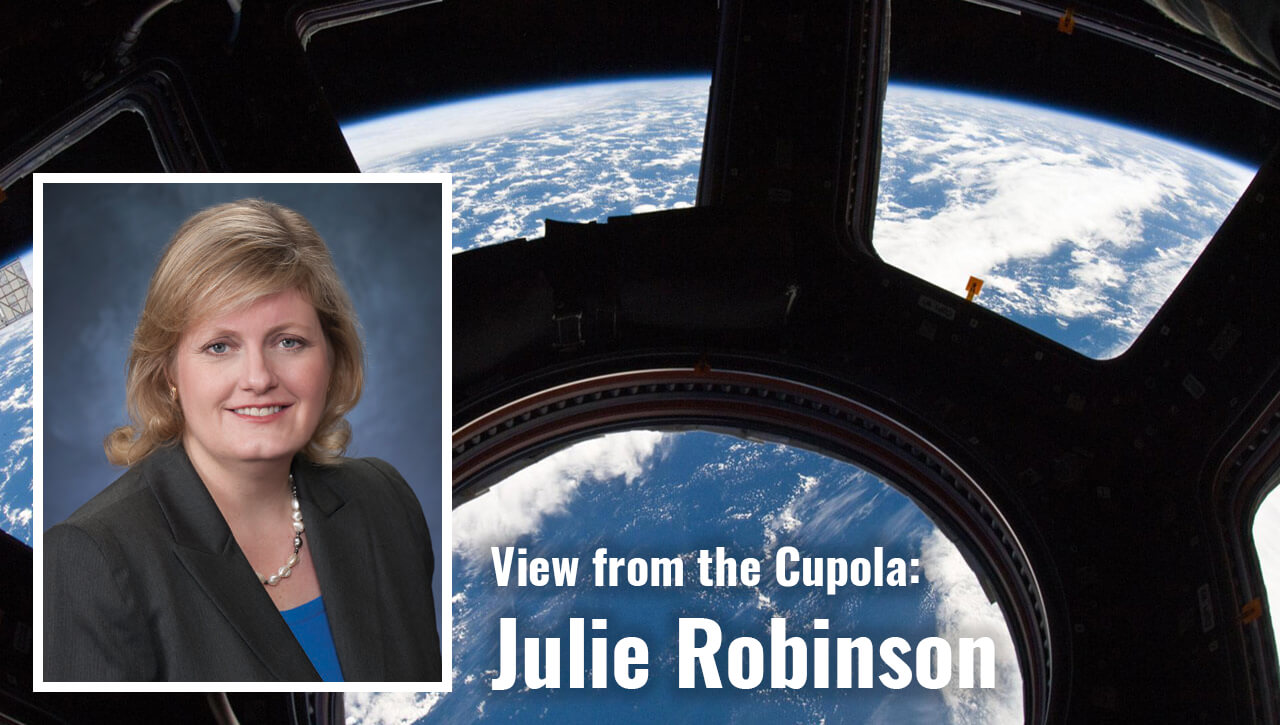