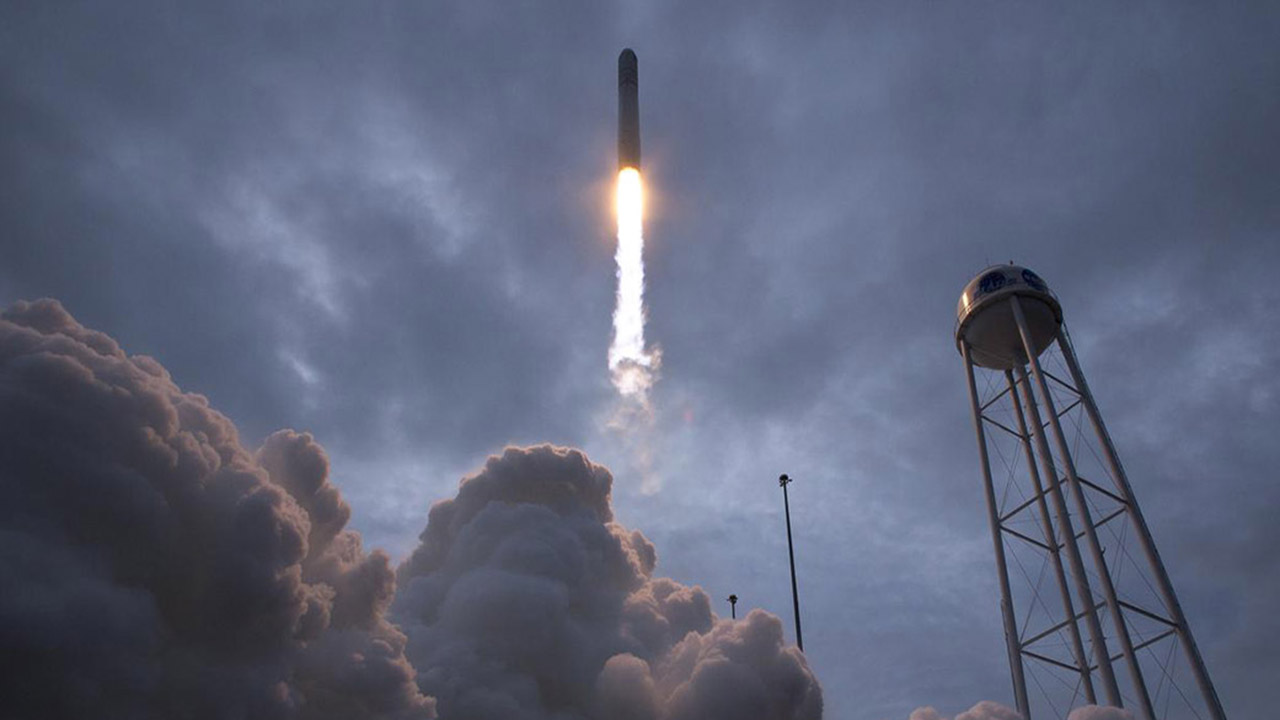 Devin Askue is a high school senior who participated in the Go For Launch! program in 2016. His team, the Saguaro Snakes, proposed an experiment that asked, “Can a Peanut Plant Help Us Colonize Mars?” Their idea was selected to be turned into a flight project that launched to the International Space Station in 2017. This experience and the additional opportunities that arose from it have helped Devin advance on his chosen path to become an aerospace engineer. 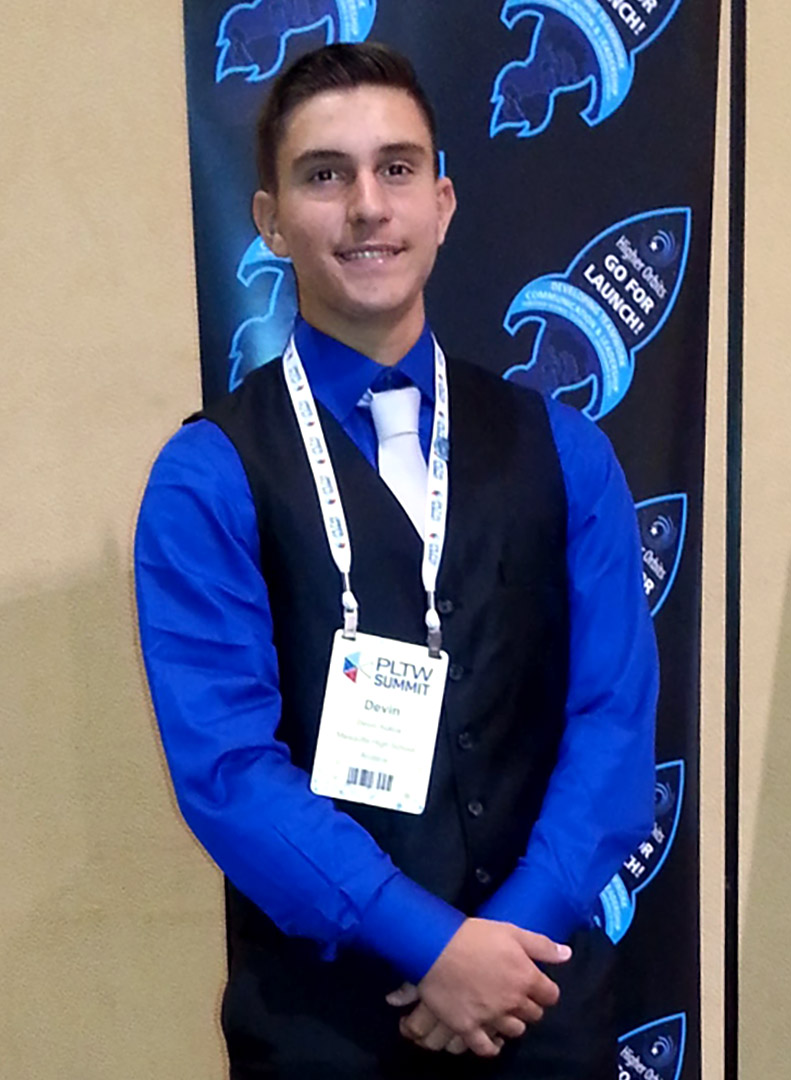 When did you start the project?

I started when I was a sophomore. The experiment launched when I was a junior. We’re getting our data now, and I’m a senior. So it’s been a long process.

How did your team get together? Were you already friends?

No, I’d never met them before. They came from other schools. We were all at a two-day program called Go For Launch! It took place over a weekend at my school, Mesquite High School. Students from all over Arizona converged there—about 60 total, I think.

We formed teams early in the program. Some people had friends there, so they teamed up with the people they already knew. The rest of us were strangers, and we just kind of said, “Hi, do you want to be on a team together?” We named our team the Saguaro Snakes. Saguaro is a common cactus here, and Arizona has lots of snakes. There was a challenge where each team designed a mission patch, and ours won for the best design! 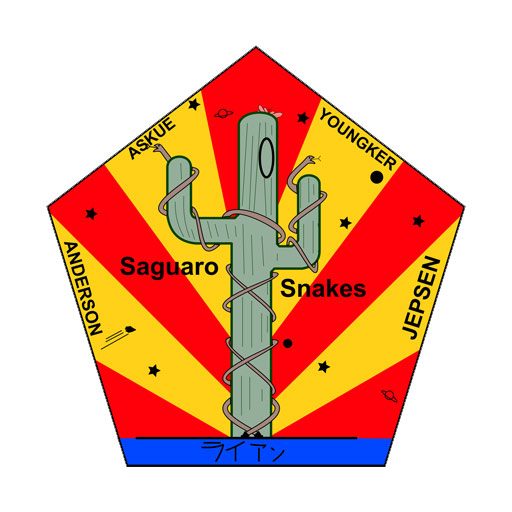 The Saguaro Snakes created a mission patch for their experiment.

We did a lot of different activities as teams. One was a tower-building challenge where you stack marshmallows as high as possible while keeping the stack stable.

How did you find out about the Go For Launch! program?

Well, I go to the school where it took place, and there were flyers posted all over the school. And our engineering teacher Mr. Jordan told our class about it. He knew that students like me in the school’s engineering program were likely to be interested.

How did you choose the topic for the project?

The competition to design a space experiment was on the second day. First we saw a presentation by Frank Culbertson—he was a NASA astronaut! Then we had about five hours to come up with an experiment.

My team was interested in plants. The big picture that we were thinking about was the colonization of Mars. Imagine farming on Mars. You’ll want plants that provide nutritious food. And if you’re using Mars dirt for your soil, you might need to work to make the soil more fertile.

So we looked for plants that help with that. We used the computers in our school’s tech center to look up different plants and what they do and what conditions they need to grow, like how much sunlight they need.

We saw that peanuts are useful because they’re nitrogen-fixing plants. Nodules on their roots contain bacteria that add nitrogen to the soil. So if you have low-quality soil, growing peanuts can make the soil richer for other crops. And, of course, peanuts are edible and a good source of protein. So we wanted to test whether peanut plants are good at keeping the soil nitrogen-rich in a microgravity environment.

At the end of the day, the teams’ experiments were judged and one was chosen as the winner. That was the regional competition for the state of Arizona. Our peanut idea won! Other regions had Go For Launch! events too, and there was a winner for each region. The people at Higher Orbits (the nonprofit that operates Go For Launch!) compared the regional winners and selected our idea to become a real flight project!

How did you prepare the experiment for flight?

We came up with the design for the experiment, but we didn’t do much of the building or preparation. Higher Orbits and Space Tango did most of the work to turn our idea into reality. We all got together and discussed the project with plant experts. We got to work with professional scientists and engineers! Throughout the process, they sent us emails suggesting changes to the project and asking if we liked those ideas. We also talked over Skype.

We were concerned that the soil would break up and float around in microgravity. To prevent this, the technicians needed a lid for the soil container that would hold the soil in place but give the plants room to grow. They couldn’t find an off-the-shelf lid that did the job, so they designed and 3D printed a custom lid. 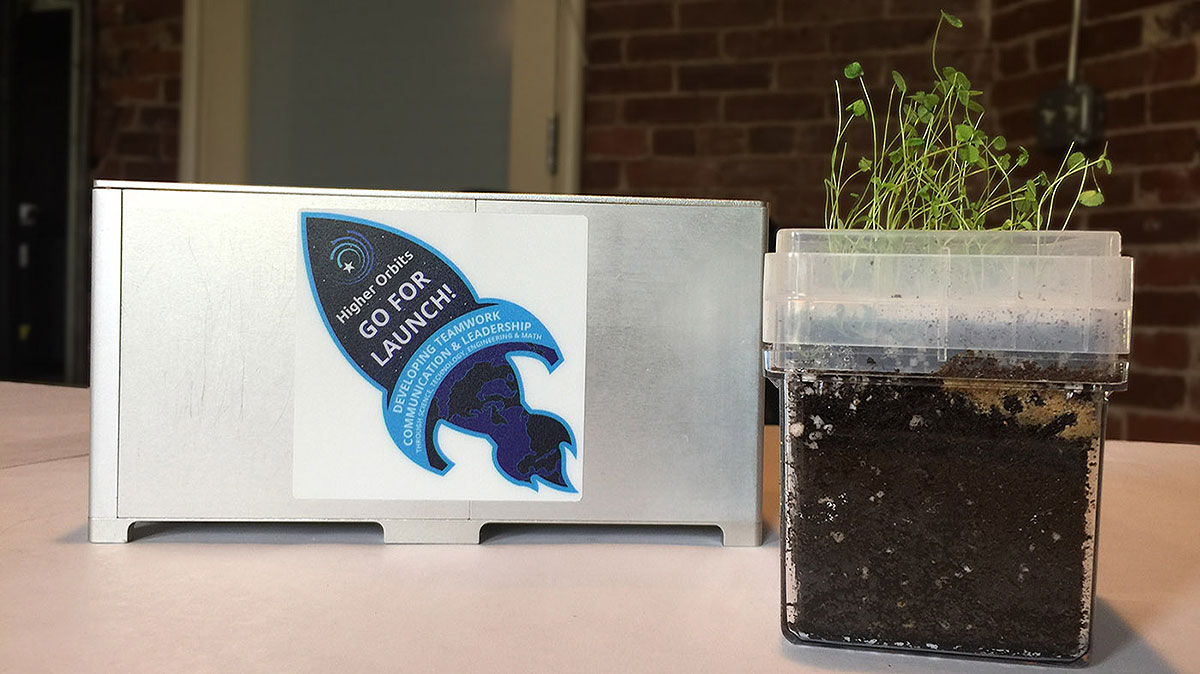 The container of microclover and moist soil fit snugly into a 10x10x20 cm metal box for installation in a Tangolab on the ISS. The plants emerge through small holes in a 3D-printed plastic lid that holds the soil in place.

We were also worried that a peanut plant might be too big to fit in the 10x10x20-cm box along with the camera and sensors. One of the Space Tango experts suggested using microclover instead. It fixes nitrogen like peanuts do, but it grows faster, needs less light, and takes up much less space. We said yes, that’s just what we were looking for! We used microclover that had already sprouted leaves and roots rather than starting with seeds.

What was it like to attend the launch that carried your experiment to the ISS?

The OA-8 launch was in Virginia at Wallops Island. It was the single best experience of my life! It was amazing! It really was.

We woke up really early to go watch it at Kennedy Space Center. The day it was scheduled, the launch was scrubbed because there was a boat in the restricted area. It was rescheduled for the next day. We had built an extra day into our travel plans because we knew problems like this were possible. We showed up again the next morning and the launch was successful.

We were a mile or two away from the launchpad. It was really cloudy, and we saw a really cool view of it going up into the clouds. It lit up the bottom of the cloud as it went up. I couldn’t believe how loud it was! It was like a huge firecracker! I loved it!

Seeing the launch got me really excited about the field of aerospace engineering. 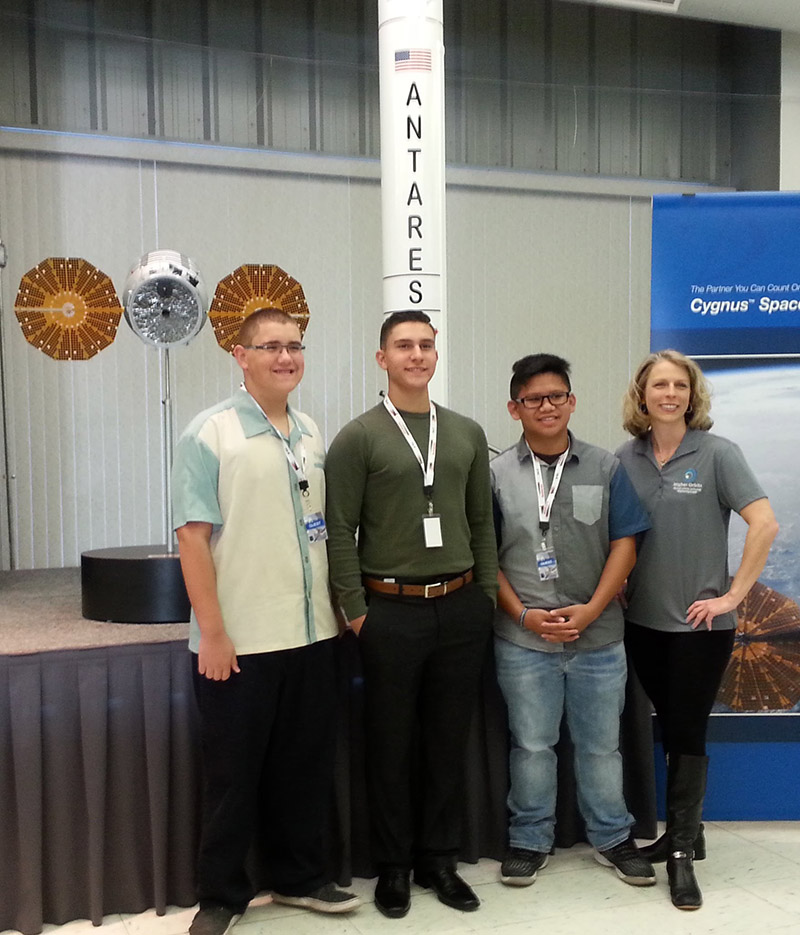 Devin (second from left) poses with collaborators in front of models of the Antares rocket and Cygnus capsule.

How did the experiment work once it was onboard the station?

The little box contained the soil, the microclover, temperature and humidity sensors, a camera, and an instrument to measure nitrogen in the soil. The box was sealed with no air going in or out. The soil was moist so the plants had enough water for the 90-day experiment.

The first time it went up to the ISS, it didn’t work. Well, some of it worked. The plants did grow, but there were malfunctions in Space Tango’s equipment. The camera took a few pictures on the way up, but then it failed. We have no pictures or data from the experiment’s time in orbit.

They were really apologetic about this glitch. They gave us an opportunity to fly it a second time. We didn’t have to rebuild our experiment—we just had to add fresh microclover.

So your experiment was sent to the ISS twice. Did it work the second time?

Yes, the second time was successful. We just got some of the data! We have a time-lapse video made from the camera’s pictures that shows the plants growing, wilting a little bit, and then sprucing back up. I have a bunch of Excel sheets showing how the humidity varied. We’re still waiting on the data for the nitrogen content of the soil.

Are you going to do any follow-up projects?

Not for this microclover project. But I did get some extra opportunities on top of going to the launch! I got to go to three states because of this!

Why did you travel to three states?

Only the trip to Virginia was connected with the Go For Launch! program. The other two trips were opportunities through my school.

A few weeks after the launch in Virginia, I got to go to Texas along with my teammate Abi. This trip was possible because we got sponsored by Southwest Airlines. They were using our project to promote the airline. You know, our original project idea was peanuts in space, and they give out peanuts on the plane. We got to talk on the plane’s intercom during two flights. We told the passengers what our experiment was about. They gave us a round of applause and stuff! 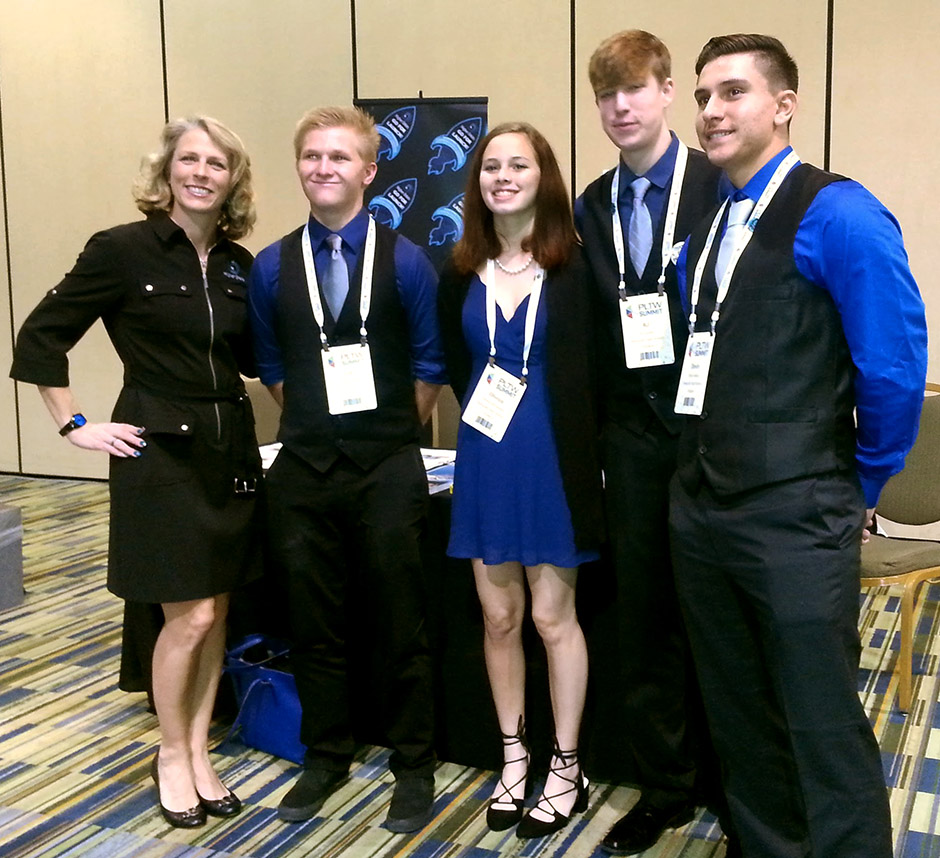 Then I went to Florida. This was because Mesquite High School’s engineering program uses curriculum from Project Lead the Way. They offered me a chance to go to their convention in Florida and present my experiment. I had to speak in front of 500 people in this auditorium. Three other kids from Mesquite came too, and we all took turns speaking on the stage. I didn’t love the public speaking, but at the convention I got to talk with a bunch of engineers, and that was great. I also visited Embry-Riddle and some other engineering schools in Florida.

Have your experiences affected what you plan to do in school or for a career?

Yes! I already wanted to do engineering, but I didn’t know what kind. After this, I want to be an aerospace engineer. I love rockets. And seeing a rocket launch in real life gives me motivation to help build one! 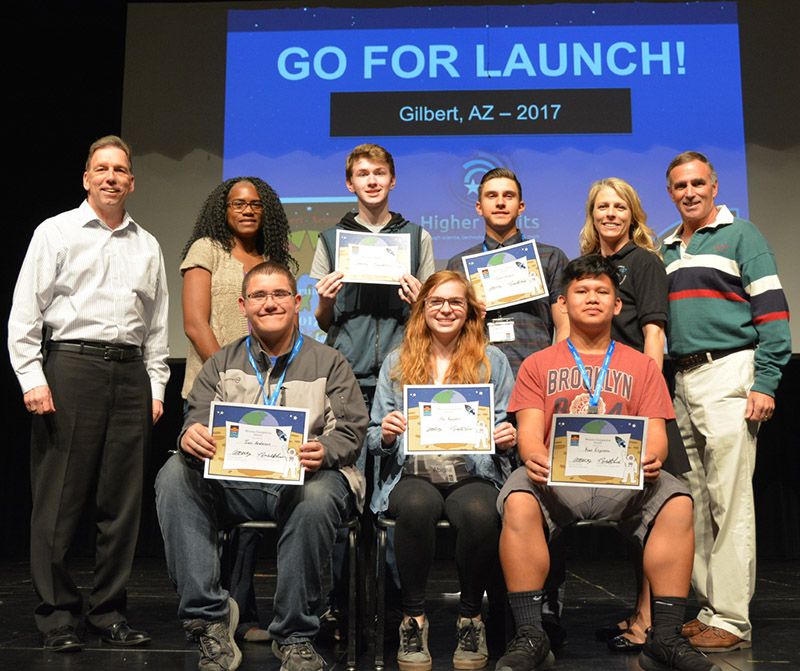 Members of the Saguaro Snakes team.

Did you learn any lessons you want to share? Are there things you wish you’d known when you started this project?

The big lesson I got out of this is: Choose your career as early as possible, because then you can look for opportunities that help you get there. I almost didn’t participate in Go For Launch! because I was worried I wouldn’t be able to pay for it, and I wasn’t sure I wanted to spend my whole weekend on it. But my mom encouraged me to take advantage of the opportunity, and we found out that Mesquite High School provided scholarships for its own students, so I got a discount.

I’m so glad I did it. One weekend program led to me sending an experiment to space, watching a launch, traveling, and meeting lots of engineers!

I love talking to engineers, because they really know what they’re talking about. They seem really interested in the projects I’ve done. They ask me questions and tell me cool stories. They have good advice about what to keep in mind when I’m working toward an engineering career.

Other lessons that I learned are: Try to spend time around smart people. Find people who care about the same things that are important to you. Be dedicated, and keep on a path. 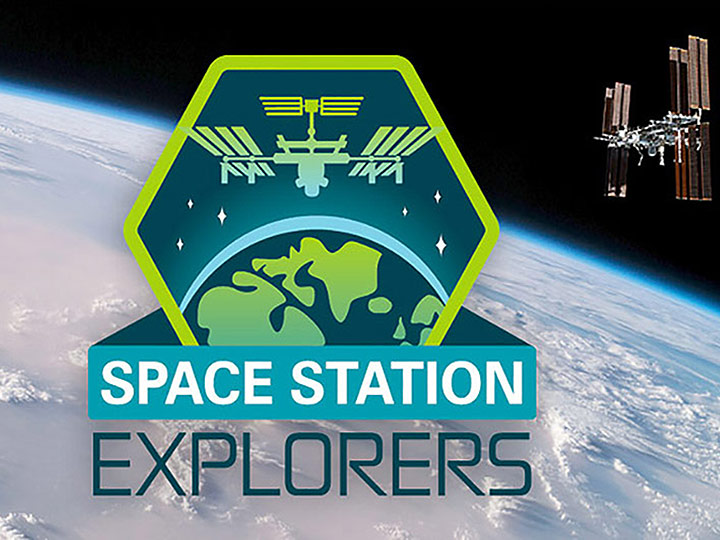 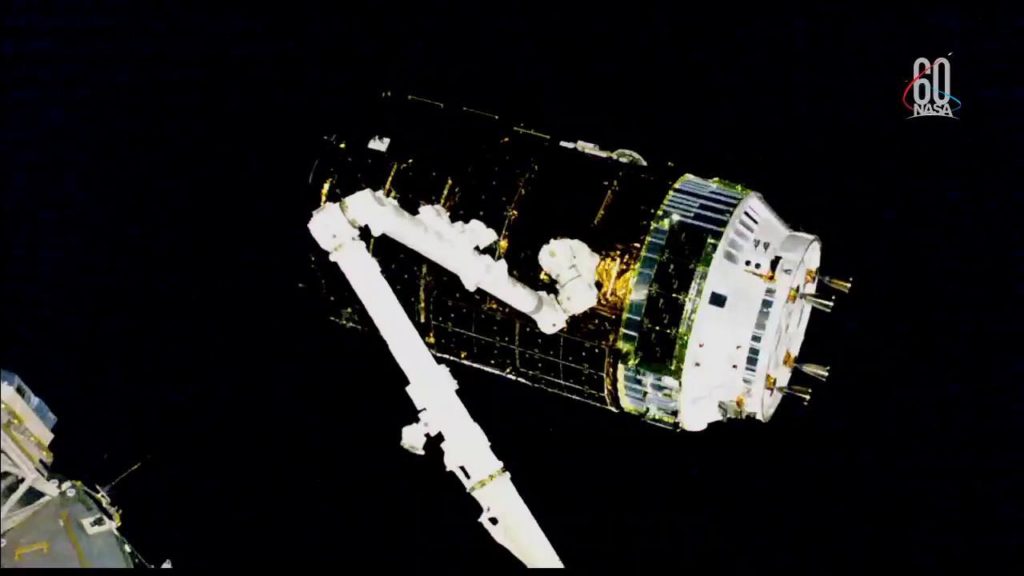