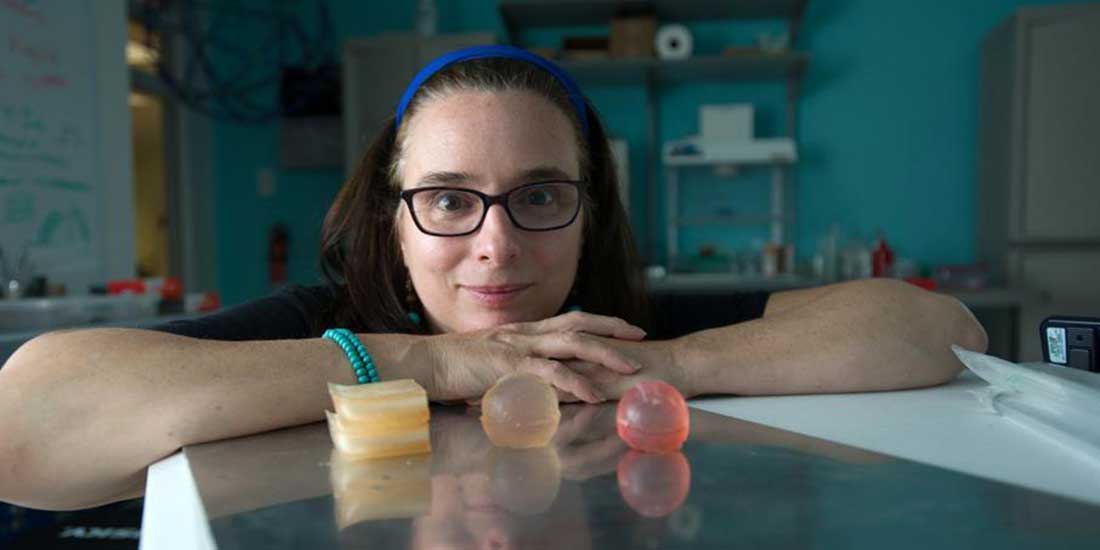 Dr. Rasmussen works with materials that change shape in response to electricity.

Lenore Rasmussen didn’t start out as an inventor and bioengineer. Growing up in West Virginia farm country, she wanted to become a large-animal veterinarian. She knew vet schools are competitive, so she studied hard in her science courses. In the process, she discovered she loved chemistry even more than veterinary science! So she studied chemistry in college—and that’s where a surprise discovery set her on a new path.

In a lab at Virginia Tech, Lenore was shooting electrical current through a slab of polymer gel when the slab suddenly convulsed as if alive! Under 50 volts of current, it shrank by 80%. When the current stopped, the slab returned to its original size! How creepy and strange! she thought.

Later, she was reading up on prosthetic limbs because her cousin almost lost a foot in a farming accident. Lenore was disappointed to see that most prosthetics were cosmetic, not functional; their joints couldn’t move realistically. She thought back to that strange electroactive polymer. If it could contract and recover quickly and reliably, could it be used as artificial muscle?

After finishing a master’s degree in biology at Purdue and a PhD in Polymer Chemistry at Virginia Tech, Lenore founded Ras Labs to continue her research. Her day job was teaching science at a community college. In her evenings at home, “I was zapping stuff down in my basement,” she said. Electroactive polymers tend to be squishy and good at absorbing water. She found and tested polymers in everyday objects such as contact lenses and diaper liners!

Dr. Rasmussen made a breakthrough in 2006, when instead of bending as expected, one substance contracted like a living muscle. Since then, she has been developing functional polymers with embedded electrodes for use in artificial muscle, prosthetic devices, catheters, valves, and other medical applications. These polymers could also be used to build robots with human-like movements.

Why Send Synthetic Muscle to Space?

Robots built with synthetic muscle could move with human-like dexterity, letting them help astronauts with difficult or dangerous tasks — but only if the material can perform well in the microgravity and radiation conditions of space. Preliminary ground testing showed that Ras Labs’ Synthetic Muscle resists radiation, even at the high exposure level of a trip to Mars and back.

In 2016, Dr. Rasmussen and her team sent samples of Synthetic Muscle to the International Space Station for testing. That put the material in the presence of radiation as well as other unusual conditions including microgravity (weightlessness) and, if the material is exposed to open space, extreme temperatures and corrosive atomic oxygen. If the material performs well even after long-term exposure to these conditions, then it could be suitable for deep space missions!