The Most Innovative Lab Not on Earth

Kaitlin Ruether was an intern at the International Space Station (ISS) U.S. National Laboratory this past summer. Below, she shares insight from her time at the national lab and highlights some of the innovative research taking place on our nation’s only orbiting laboratory.

More than 250 miles above our planet sits the International Space Station (ISS)—the technological phenomenon that orbits the Earth every 90 minutes and is home to one of the most extraordinary laboratories known to humankind, the ISS National Lab. The experiments on this orbiting laboratory are not only changing how we design and produce things on Earth, many are also expanding our knowledge of microgravity’s effects and informing the future of space travel. 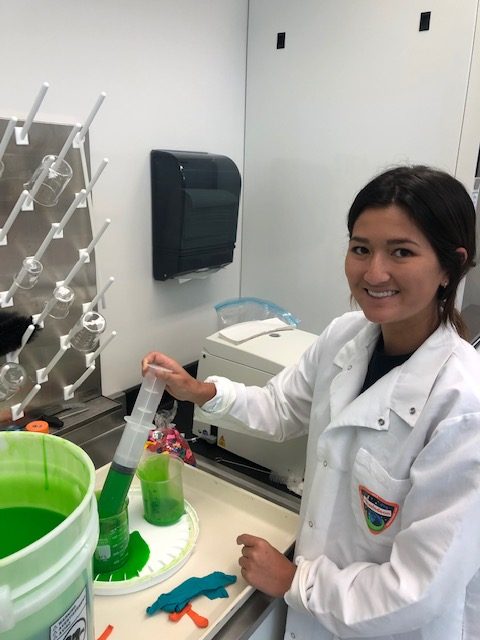 ISS National Lab intern Kaitlin Ruether handling Nickelodeon slime prior to the launch of the Nickelodeon Slime in Space payload on SpaceX CRS-18.

ISS National Lab experiments come from private entities, government agencies, academic institutions, startups, and even Fortune 500 companies. In one experiment, researchers from the University of Florida studied the growth of algae in microgravity. One of their goals was to observe how genetic engineering could help create a more sustainable algae industry on Earth. Additionally, the researchers discovered that algae could potentially become a vital space crop with multiple uses on future long-duration spaceflight missions.

Another project that recently launched to station is a 3D printer that uses bioink consisting of stem cells and human proteins to create real, functioning human tissue. This astounding platform, Techshot’s BioFabrication Facility, aims to leverage the absence of gravity in space to create soft tissues, which have been difficult to produce on Earth.

These are just two of the hundreds of experiments that have been done on the ISS National Lab to improve the lives of people on Earth. The results of the algae experiment could lead to the ability to genetically engineer algae that is more useful for humans. The 3D human tissue printing facility holds hope for future regenerative therapies. One day, such a printer could reduce the need for a transplant list, as its end goal is to effectively create individualized functioning organs.

The availability of a research platform in microgravity creates an alternative environment for experimentation that will only be enhanced as time goes on and new facilities and research capabilities are added. The advancements of today are stepping-stones for the seemingly impossible breakthroughs of tomorrow. As an undergraduate student studying life sciences and business, I have an esteemed appreciation for the variety of experiments on the ISS National Lab and the resulting discoveries that impact the world below.