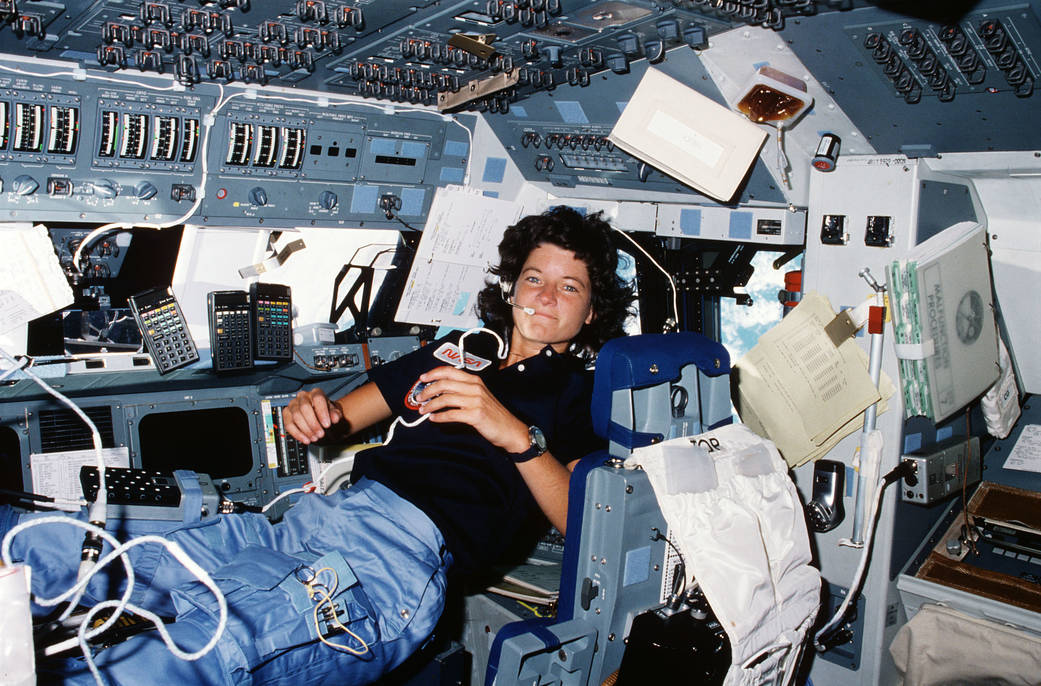 In 1983, Mission Specialist Sally Ride became the first American woman to fly in space on the STS-7 mission aboard space shuttle Challenger.

Each year, May 26 is a day set aside to honor Sally Ride, the first American woman to travel into space. Ride was a mission specialist on NASA’s seventh shuttle mission, STS-7, aboard space shuttle Challenger in 1983. Looking at how far we’ve come since Ride’s historic journey, it is an exciting time for women in science.

Nature recently announced that geneticist Magdalena Skipper is stepping up as the journal’s new editor-in-chief, becoming the first woman to hold the position at the prestigious scientific journal since its start 149 years ago. Skipper, who has worked in Nature journals for more than 15 years and is currently the editor-in-chief of the open-access journal Nature Communications, will begin her new position on July 1.

As we celebrate pioneering women in science such as Ride and Skipper, read below to learn more about some of the women doing groundbreaking research on the International Space Station U.S. National Lab. 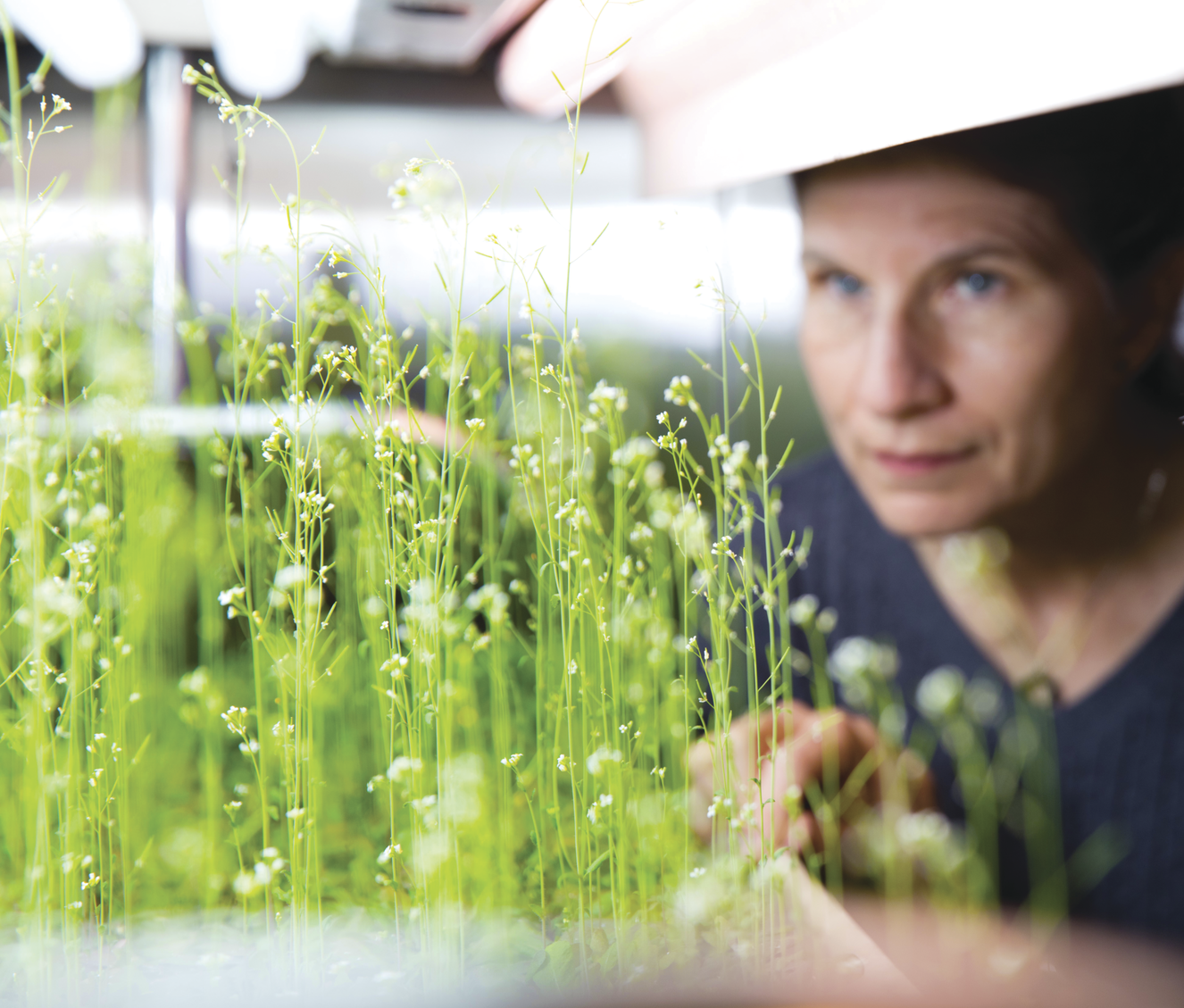 Anna-Lisa Paul in the University of Florida Space Plants Lab

Anna-Lisa Paul, research professor at the University of Florida, is using the ISS to study fundamental plant development processes in an environment free of the masking effects of gravity. Spaceflight experiments provide valuable information on plant structure and behavior that translates directly to understanding how these processes work back on Earth.

Paul and co-investigator Robert Ferl compared the distribution of auxin (a plant hormone involved in orienting roots to grow in the direction of the pull of gravity) in the root tips of plants grown on the space station versus ground controls. Results showed that although auxin plays a key role in determining how plants respond to gravity, gravity is not involved in establishing the distribution of auxin in root tips, as scientists had long assumed.

Read more in the Upward feature “Staying True to Your Roots: Plant Research on the ISS.”

“Taking gravity out of the equation gives us insight into the inherent mechanisms of how plants work. And the better you understand that, the better equipped you are to design experiments on Earth to build better crops and expand productivity—in addition to being able to take plants with us when we leave Earth’s orbit for extended missions or colonies on Mars.” —Anna-Lisa Paul 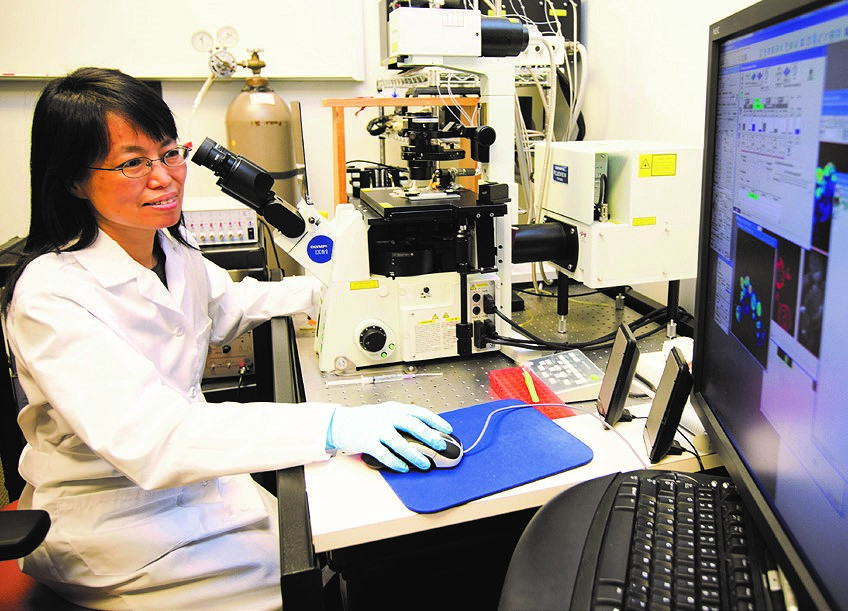 Chunhui Xu, associate professor at the Emory University School of Medicine, is studying cardiac progenitors and their differentiation into cardiomyocytes, cells of the specialized muscle tissue of the heart. Progenitor cells are cells that are partially differentiated (i.e., more specialized than a stem cell) but can still differentiate into multiple cell types.

Building on ground research using simulated microgravity, Xu is preparing a flight project to examine the effects of microgravity on the ability of cardiac progenitors derived from human skin cells to proliferate, or rapidly increase in number. Stem cells could eventually be used to develop therapies for replacing damaged tissues and to grow organs and tissues that could be used as disease analogs.

Read more in the Upward feature “Pure of Heart: How Microgravity is Improving Cardiac Cell Quality.”

“Large numbers of cardiomyocytes need to be generated in a more efficient way than currently possible. When we combined simulated microgravity with 3D culturing techniques, we saw promising steps toward reaching that goal.”—Chunhui Xu

Paola Divieti Pajevic, associate professor at Boston University’s Goldman School of Dental Medicine, is studying osteocytes (the most abundant cell type in bone) and their role in bone health. Osteocytes control changes in bone mass in response to mechanical force applied to bones, but the mechanisms involved in the ability of osteocytes to do this are unknown. The ISS is an ideal platform to study biological mechanisms related to mechanical force and bone disease because microgravity simulates the lack of force on bones and muscles experienced by bedridden patients on the ground.

By analyzing osteocyte gene expression in space, Divieti Pajevic and her team discovered potential new targets for drug development to treat conditions that cause bone loss.

“This was the first experiment on osteocytes in space, the first on the space station, and the first use of this hardware on the station, so it was quite interesting to have such success and discover two new pathways that might be important for bone metabolism."—Paola Divieti Pajevic 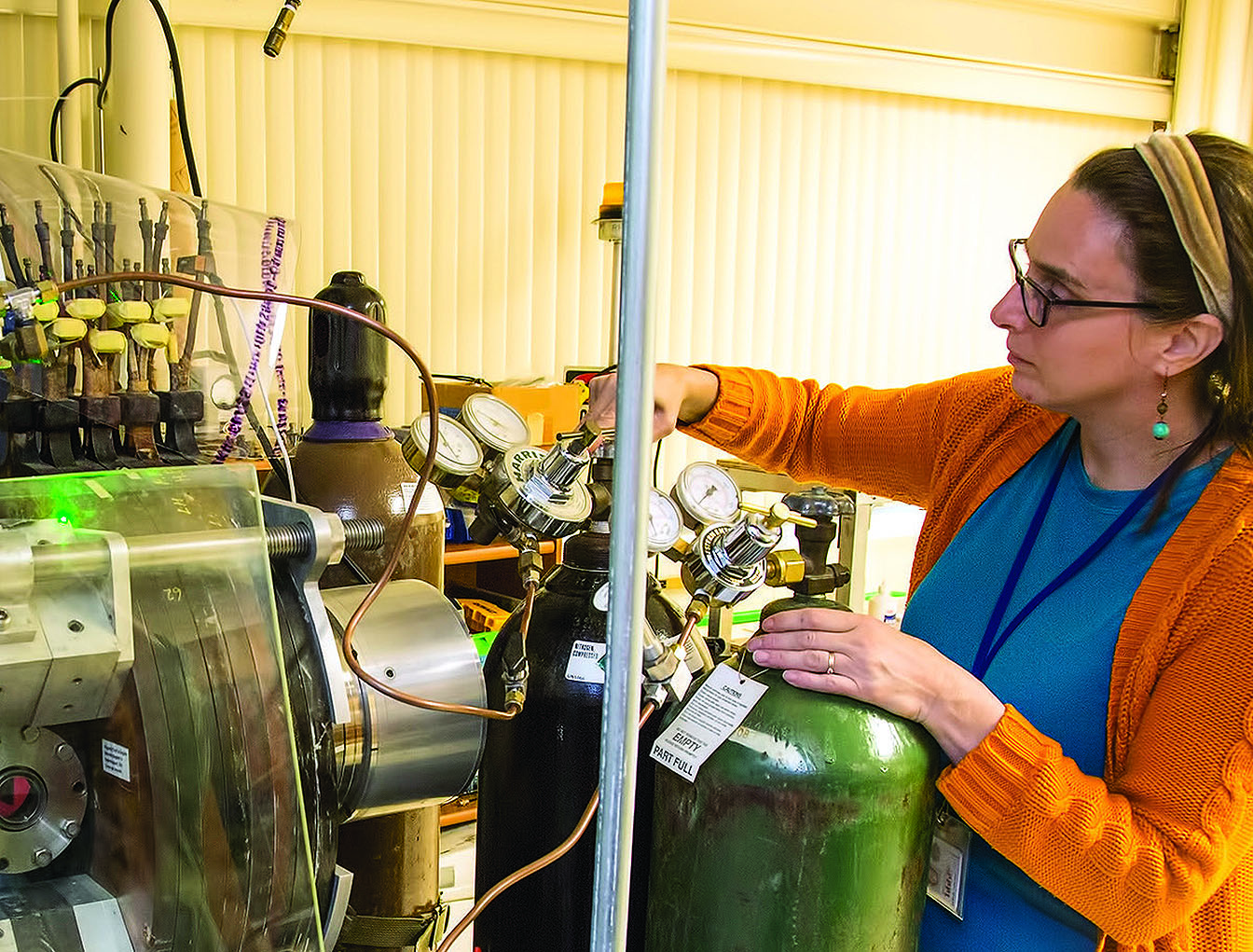 Lenore Rasumussen, founder and CEO of the Boston-based company Ras Labs, designs and tests Synthetic Muscle™, an electroactive polymer-based product aimed at making prosthetics more lifelike. Electroactive polymers are a type of materials much lighter than metals that are capable of bending in response to electrical stimuli without pulleys, gears, or motors. Rasmussen discovered specific formulations and configurations of these polymers that allow them to contract in a way similar to human muscle contraction.

Testing onboard the ISS could help reveal unknown characteristics of the polymers, such as their strengths and weaknesses, which could lead to the development of new materials with improved features.

“I thought there must be a way to bridge the gap between form and function, a different way of doing motion rather than a purely mechanical approach.”—Lenore Rasumussen 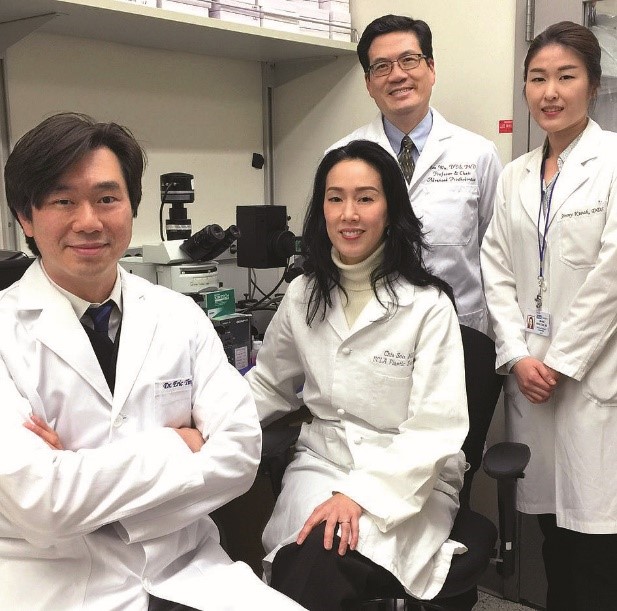 Chia Soo, professor, and Jin Hee Kwak, adjunct associate professor, of the University of California, Los Angeles, and colleagues are developing a new potential therapy for osteoporosis based on a naturally produced protein called NELL-1. For the Rodent Research-5 mission, the team tested the ability of the NELL-1-based systemic therapy to treat microgravity-induced osteoporosis in mice onboard the ISS. Current osteoporosis treatments work either by slowing bone breakdown or increasing the formation of new bone. In animal models, NELL-1 has been shown to work both ways.

If effective in humans, NELL-1 therapy could be used to treat patients with severe osteoporosis on Earth. It could also be used to prevent spaceflight-induced osteoporosis in astronauts on long-duration missions.

“Microgravity is known to induce bone loss up to four times faster than models on Earth, and induces an extreme state of osteoporosis that is difficult to mimic by a single osteoporosis model on the ground. Microgravity-induced bone loss is also an excellent and unique model of disuse atrophy from disability and immobilization on the ground that frequently occurs with osteoporotic fracture patients.”—Jin Hee Kwak 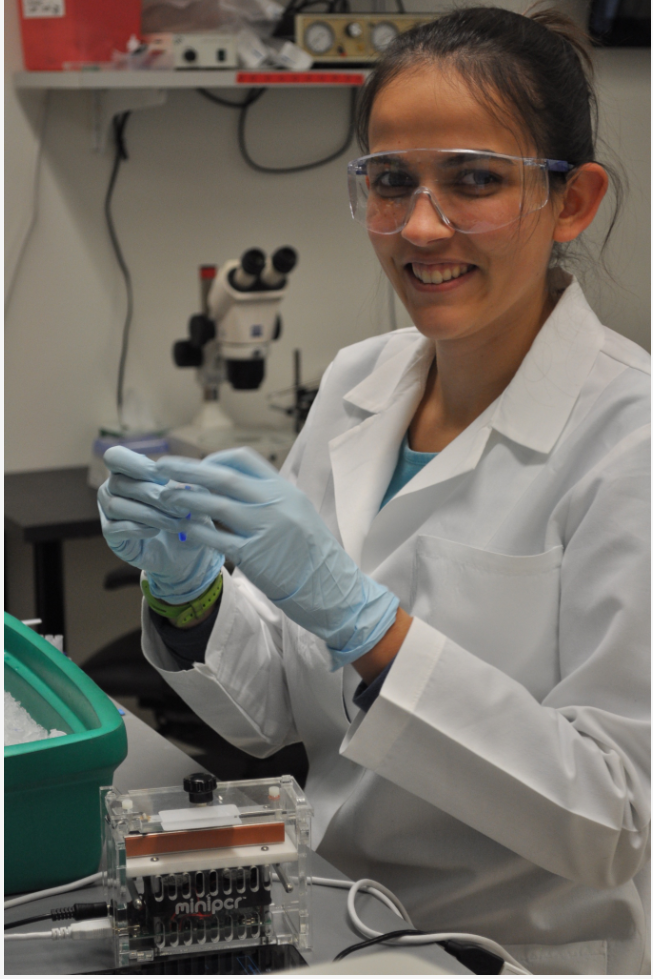 Anna-Sophia Boguraev, a New York high school student, is the inaugural winner of the Genes in Space™ contest. The Genes in Space™ program, founded by Boeing and miniPCR and supported by the ISS National Lab, is an annual competition in which students in grades 7 through 12 compete to send their DNA experiment to the ISS. The experiments use a compact and energy-efficient polymerase chain reaction (PCR) machine developed by miniPCR to make billions copies of specific sections of DNA.

Read more in the Upward feature “Launching a Dream: Exploring DNA in Space.”

“Since I was four years old, I watched rockets launch and all of the science being done in space, and I always wanted to be a part of it. Then suddenly, I was part of it—I was standing there with a rocket launching three miles away going to the ISS, and it had my experiment on it!”—Anna-Sophia Boguraev 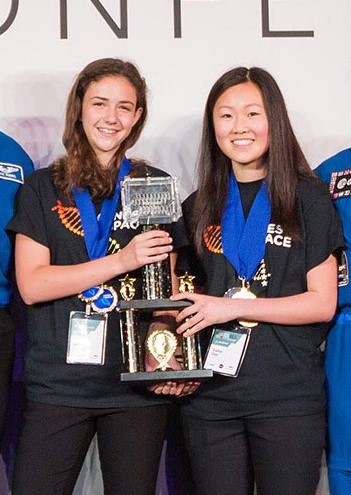 Elizabeth Reizis, a New York high school student, and Sophia Chen, a Washington high school student, are the 2017 winners of the Genes in Space™ contest. Reizis’ project is testing a method that could be used in space to evaluate the effects of microgravity on immune system function. Chen’s project is focused on a technique that could be used to measure cancer-inducing genomic instability linked to radiation exposure during spaceflight. 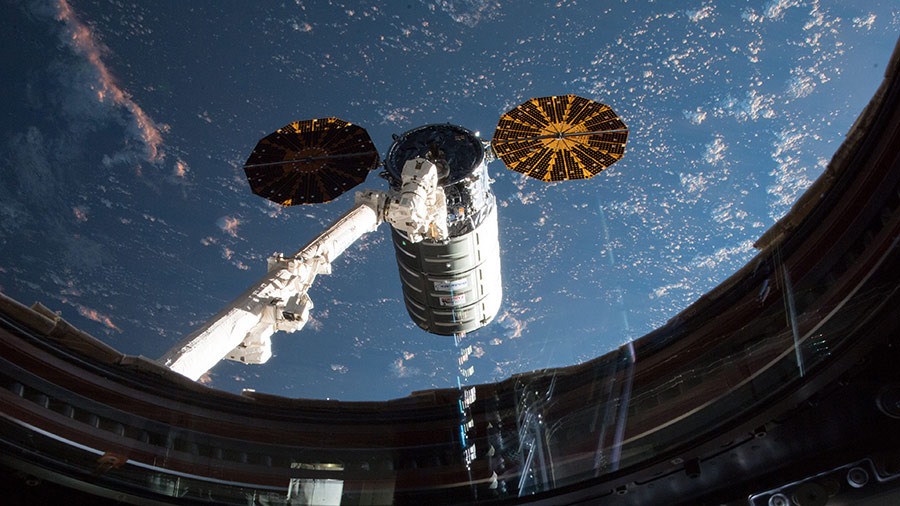