Recently, Dr. Joseph Ng of iXpressGenes, Inc. published an exciting article in an online journal that features some images of proteins grown in space onboard the International Space Station U.S. National Laboratory. The article, which appears in Acta Crystallographica: Structural Biology and Crystallization Communications, details different methods of growing very large protein crystals—including growth in microgravity, a condition that is available for long-term use onboard the ISS National Lab managed by the ISS National Lab.

Figure 1: Images of large crystals grown onboard ISS National Lab during Dr. Ng’s experiment (courtesy of Dr. Ng, and distinct from those included in the published article).

Dr. Ng is an accomplished researcher and an elected member of the U.S. National Academies’ National Committee for Crystallography. Protein crystallography, Dr. Ng’s research focus, is a method scientists use to determine a protein’s structure by analyzing it in a crystal form. Because a protein’s structure determines the way it functions in the body, this type of research is critical for understanding human disease and for developing new treatments.

In his recently published article, Dr. Ng specifically focuses on a type of crystallography called neutron diffraction. This type of crystallography can reveal far more detail about a protein’s structure than traditional methods that use X-rays instead of neutron sources. While X-ray crystallography techniques continue to improve and are widely used, neutron diffraction is the only method that can reliably determine the position of hydrogen atoms in a protein’s structure—and hydrogen makes up about 50% of the atoms in a protein! The way a protein interacts with other proteins and binds to other molecules—including drugs—depends heavily on the location of these hydrogen atoms. So truly understanding a protein’s function in the body and its susceptibility to various drug treatments requires knowledge of where these atoms are located in the 3-D structure of the protein.

So why aren’t all structures determined using neutron diffraction? Here’s the catch: current advances in X-ray crystallography can obtain useful data about a protein’s structure from an extremely small crystal lattice of the protein, but neutron diffraction analysis requires very large crystals with a well-ordered lattice. Growing a protein crystal is often difficult in the first place, due to the very particular and individualized conditions needed for various proteins to form a crystal lattice in a solution. As such, the structures of many proteins remain unknown. As you can imagine, growing a large crystal that is of good quality is even more difficult—so much so that 99% of known structures today include very little information about the location of hydrogen atoms.

Dr. Ng’s article dives into strategies for overcoming this challenge and creating crystals sufficient for analysis by neutron diffraction. He discusses various techniques, approaches, hardware options, and issues involved in growing large crystals. One of the highlighted options in his article is the use of microgravity, an environmental benefit offered by the ISS National Lab. To grow crystals in space, Dr. Ng chose to use a technique called counter diffusion. In this technique, chemical solutions are allowed to slowly flow into small capillary tubes (about 2 millimeters in diameter) that contain concentrated protein samples. When the sample mixes with the chemicals, the protein molecules come out of solution—with varying degrees of organization, from a well-ordered crystal lattice to a disordered solid. In general, the slower the solutions mix, the more ordered the crystal is, which makes it more suitable for analysis by neutron diffraction.

On the ground, different methods are employed to slow down the mixing of solutions during counter diffusion; for example, using liquids that are more viscous or using very narrow tubes (less than 0.3 mm in diameter). However, crystals grown by these methods on Earth are limited in size and can lack order. An alternative is to use the space environment, in which mixing within the capillary is minimized because convection—the most dominant force that causes liquids to move about and mix—is dependent on gravity. Thus, in the microgravity onboard the ISS, other forces, such as diffusion, take over. Slow diffusion is allowed to occur across the length of the capillary without other mixing forces, giving rise to optimal conditions for crystal formation and growth. This produces the large crystals that you can see in Figures 1 and 2, which are images from Dr. Ng’s the ISS National Lab-sponsored experiment onboard the ISS.

Figure 2: IPPase (the protein of interest) crystals were observed under a light microscope through a polarized filter showing birefringence. All crystals were grown in 2 mm diameter quartz capillaries. The largest crystals measured to be about 0.8 mm3 with the longest dimension of about 1.5 mm (panel A). When the capillary is turned 90o, the three-dimensional growth is readily observed (panel B). Earth-grown crystals grown under equivalent conditions displayed higher incidence of nucleation (i.e., more crystals) but smaller size; the largest crystals measured only 0.4 mm in the longest dimensions (panels C and D).
(Images – courtesy of Dr. Ng, and distinct from those included in the published article) 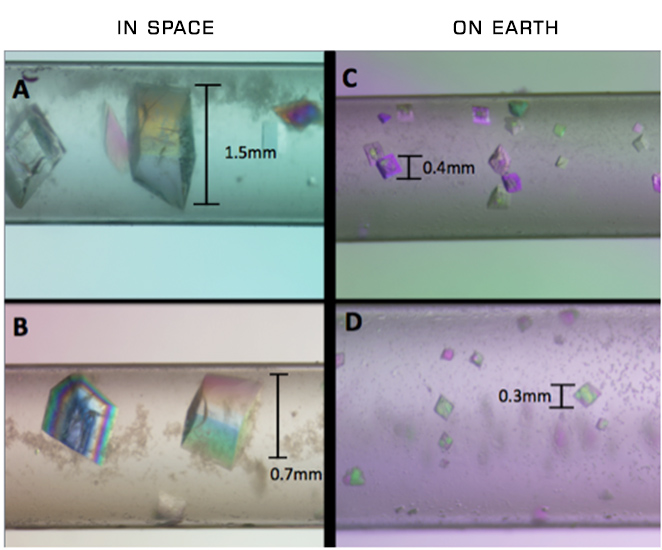 At Oak Ridge National Lab, Dr. Ng recently completed his neutron diffraction analysis on the crystals that grew for an unprecedented six months onboard the ISS. With the growing availability of neutron sources for this type of analysis—and the increasing importance of structure-based drug design for human disease on Earth—successful approaches to growing large crystals are paramount. Dr. Ng’s findings from his space-based experiment may thus critically impact this field and change the landscape of protein crystallography approaches. Dr. Ng anticipates publishing his data and analyses in the near future, via peer-reviewed papers in academic journals, and we are excited to see his results.For now, Dr. Ng leaves us with this (from the originally published article):

“…the International Space Station (ISS) has been recently used as a platform, managed by the Center for the Advancement of Science in Space (the ISS National Lab), to grow large volume protein crystals for X-ray and neutron crystallography. SpaceX, an American space-transport services company, can now provide lift vehicles to the ISS delivering protein crystallization experiments. While obtaining large protein crystals may not be as important now as it was in the past for X-ray crystallography, it is absolutely necessary for [crystallography using neutron diffraction] today. Microgravity may play a critical role in obtaining protein crystals suitable for [neutron diffraction] that would not otherwise be possible on earth.” 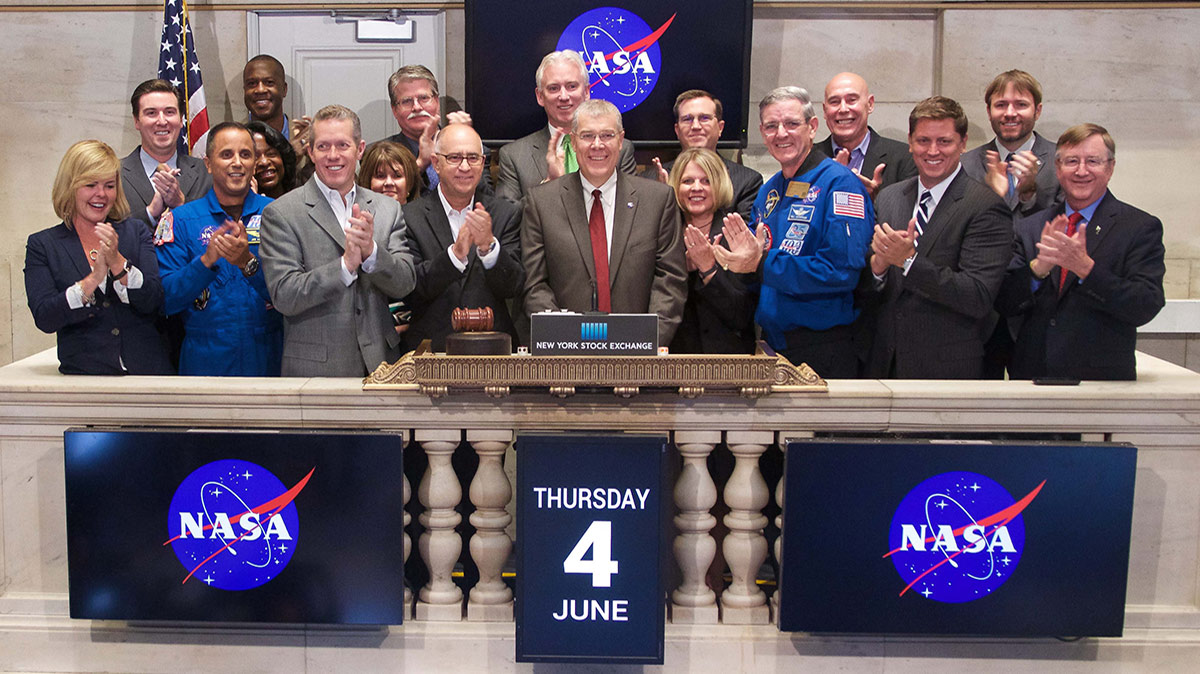 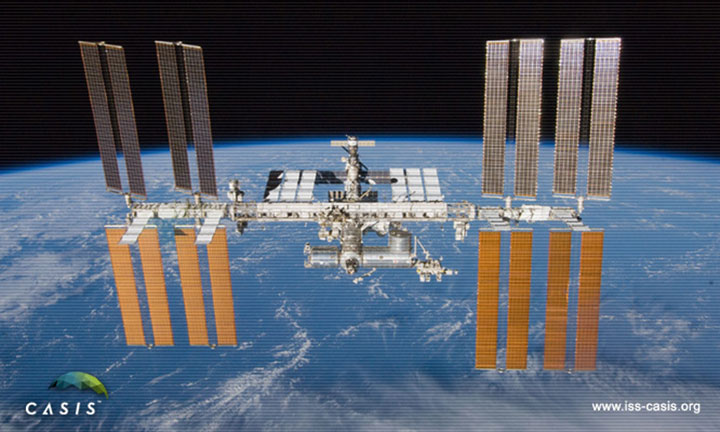