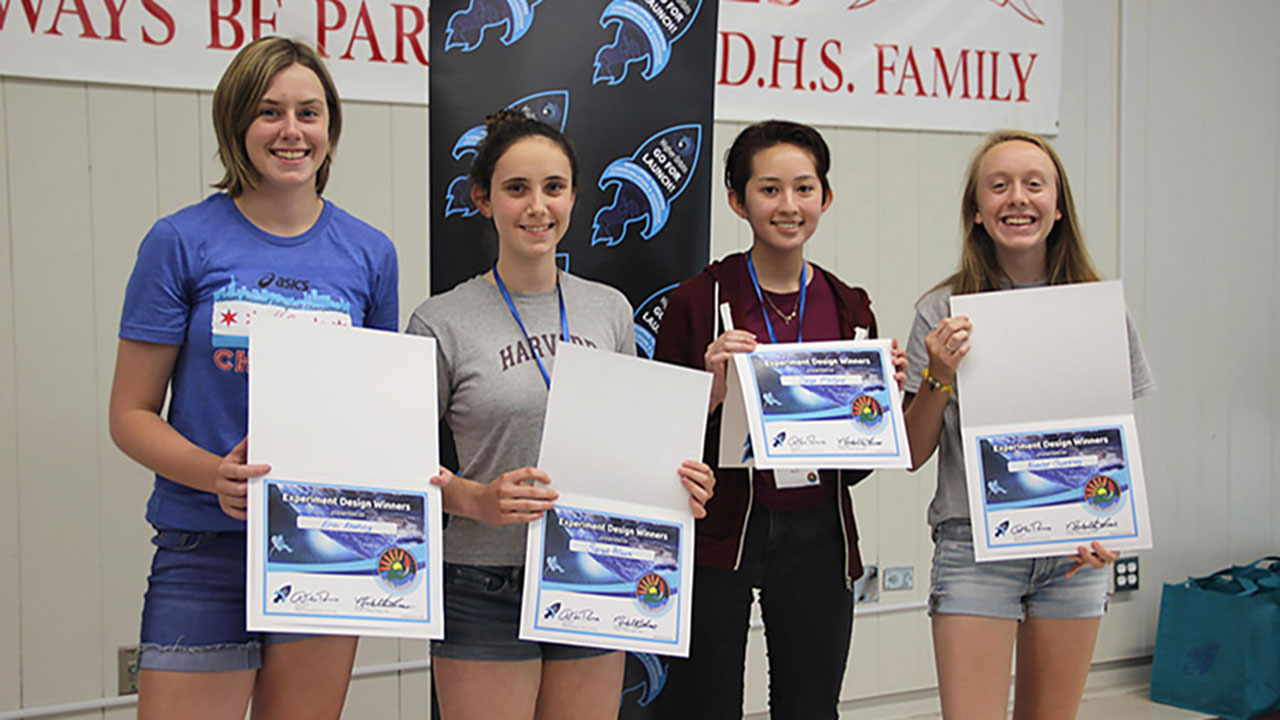 On June 29, 2018, a box of live bees launched to the ISS on the SpaceX CRS-15 mission. The experiment was designed by Team NESS, a group of girls from different high schools in Illinois. We did this Q&A with three team members—Erin, Skye, and Sarah—at Kennedy Space Center the day before their experiment was scheduled to launch.

SARAH:  We are Team NESS, an acronym for the names of the four girls on the team: Nova, Erin, Sarah, Skye. It also means “miracle” in Hebrew. I am a junior at Evanston Township High School and the team lead for the project. 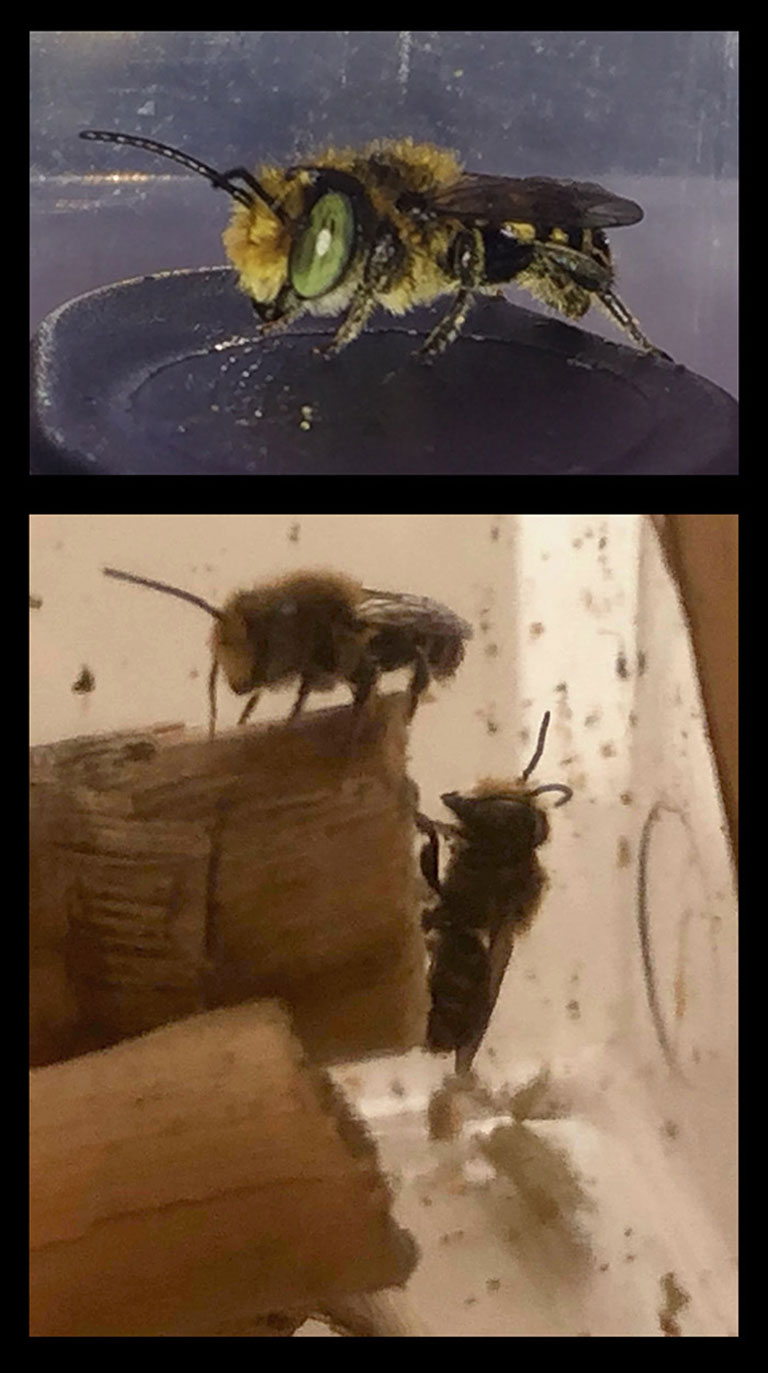 Tell us about Bees in Space.

SARAH:  Our project has an official title: “Megachile rotundata Proprioception and Flight Patterns in Microgravity.” But “Bees in Space” works too. It’s an experiment regarding bee behavior in space post-hibernation. There hasn’t been extensive study into how bees behave in space, so our experiment will provide data on a largely unexplored topic.

ERIN:  There have been bee experiments on the space shuttles, but this will be the first time that bees are being flown to the International Space Station. So, pretty cool.

How is it possible for high schoolers to send an experiment to space?

SARAH:  This opportunity is from the Go For Launch! program run by Higher Orbits. I heard about the Deerfield area Go For Launch! event from a mentor of mine who runs the Women in STEM Club at my school. She put out an email to the whole Women in STEM Club about it, and I signed up. I thought it was going to be an amazing opportunity, and I was right!

ERIN:  I found out through a family friend of mine who’s on the Board of Education for my high school, because we were the location of it. She gave the flyer to my mom. It was an event where middle and high schoolers from several schools in our region came to our school for three days.

ERIN:  There are some lectures and a lot of activities, like team challenges. We talked to an astronaut, Don Thomas, so that was probably one of the best parts!

SARAH:  The astronaut brought his spacesuit, so we got to try on the suit and do a little model walk down a runway for fun. It was a real Russian Sokol suit. I got to try it on! I never thought I would get the chance to do that! On the last day of the event, our capstone project was designing an experiment that could hypothetically be flown into space. 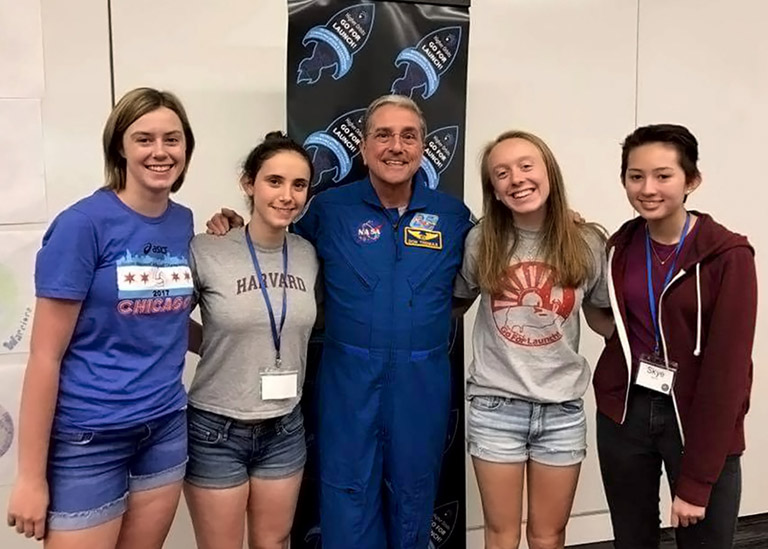 Former NASA astronaut Don Thomas talked with students and offered guidance on some of the team activities during the two-day Go For Launch! event.

Where did you get the idea to study bees in space?

SARAH: We got the inspiration initially because we were thinking about, you know, all the science fiction movies with hibernation. In a spacecraft on a really long journey, the crew might be frozen or put in suspended animation to hibernate. And then Skye just mentioned, “You know, bees hibernate!” And we kind of rolled from there. Since then, it’s completely evolved into something different. But it started with that spark of creativity, thinking about science fiction and all those movies we’ve seen, and how we can bring that science fiction into reality. 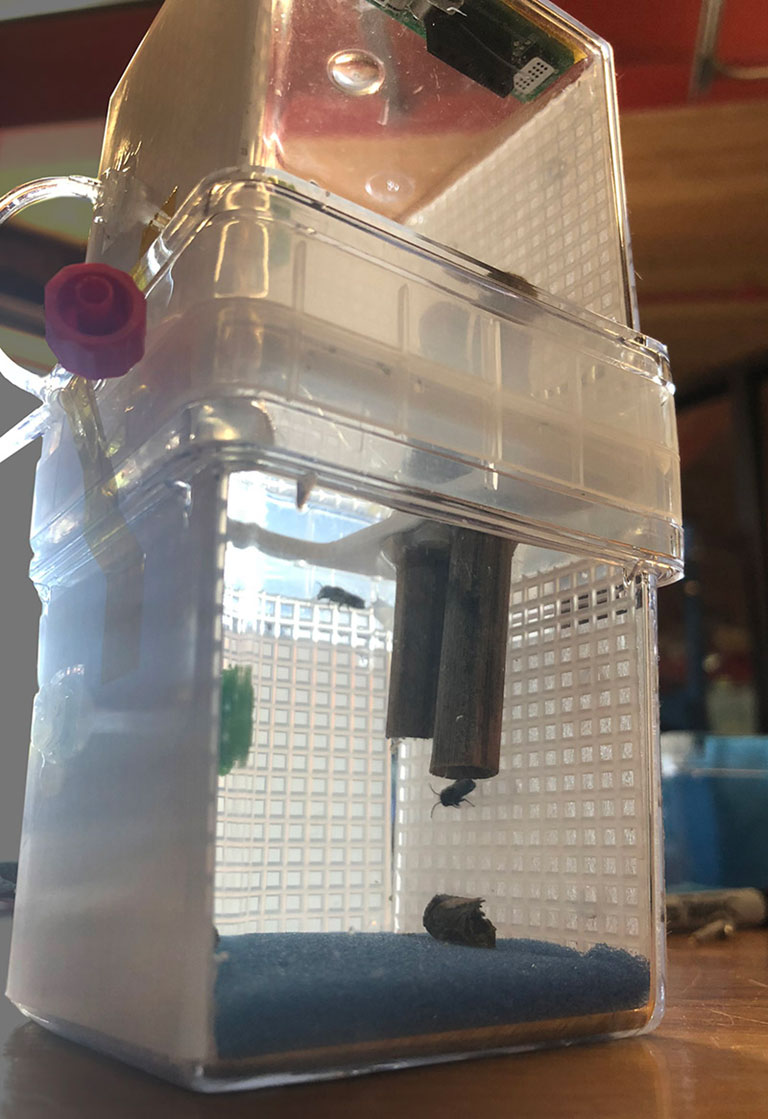 How will your experiment work?

SARAH:  We’re using alfalfa leafcutter bees. The scientific name is Megachile rotundata. We’re flying up five of them, still in cocoon form, to the International Space Station. All five are in a single box, a cube that’s 10 centimeters on a side. They are going to emerge from their cocoons after they’re onboard and we’ll observe them for 30 days. We have cameras in the box, and every 30 minutes they’ll record a 30-second video and take a still image of the bees, so we can study their behavior. We’ll compare that footage to footage that was taken on Earth with the same setup to see how the bees’ flight patterns, feeding patterns, behavior, interactions—how all of those things have changed since they were put into this situation on the International Space Station.

What was especially challenging and/or fun about the project?

SARAH:  The most challenging part of designing the experiment was figuring out what data we could collect to gain the greatest insight, and how we could accomplish our goals within a 4x4x4-inch cube. The most fun part was knowing that we are making a contribution to science at large!

ERIN:  Yes, I do think bees are going to behave differently in microgravity just because of how much of an extreme change it is to the environment on Earth. Even though they’ve never lived as mature bees on Earth, it’s still what they’re used to because it’s been passed down in their ancestry.

History of Bees in Space

Could this research have any useful applications on Earth?

SARAH:  Yes! The results of our experiment have a wide range of applications. The one that most people think of when they think about bees is conservation. You know, “Save the bees!” Bees are having trouble on Earth, especially honeybees, possibly due to several causes. Although the species we’re using is not endangered, we still might find something about their behavior that could be used to help in bee conservation in general.

Another important application would be pollination. Bees are responsible for a lot of the pollination on Earth! Most of the fruits and vegetables we eat rely on pollination by bees. The results of this experiment could help farmers and beekeepers improve agricultural practices.

What time is the launch tomorrow? How do you feel about getting up that early?

ERIN:  I’m OK with it because it’s going to be really cool.

SKYE:  It’s such an amazing opportunity to be able to work on a project that’s going up to the space station. I mean, this is such a rare thing to do! And being able to see the launch from the VIP area—that’s so exciting!

SARAH:  I’m super psyched! I’ve been thinking about basically nothing else for the whole week leading up to this! We’ve been making our poster and working with the engineers who have been building the experiment. 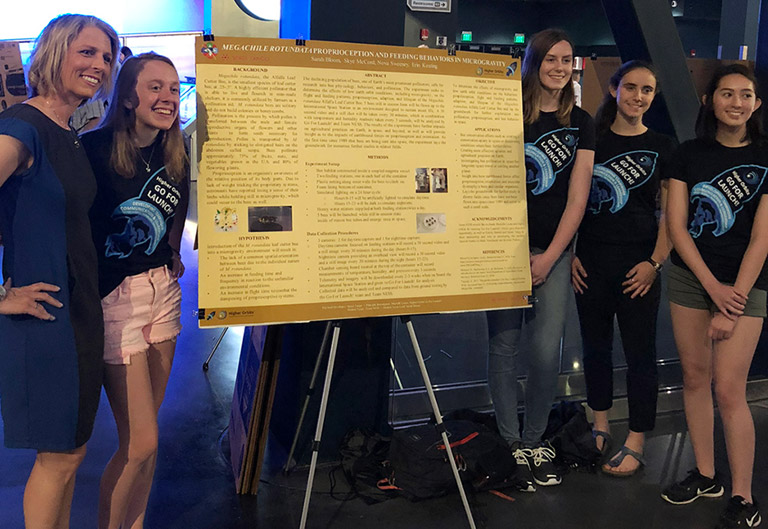 Higher Orbits founder and president Michelle Lucas (left) poses with three of the four Team NESS members at their poster shortly before the SpaceX CRS-15 launch.

You didn’t build the experiment yourself?

SARAH:  That’s right. Our idea was selected to be developed into a flight project, but we didn’t build it on our own. We have not personally handled the bees. The hardware and testing are done by Higher Orbits’ partner organization, Space Tango. We’ve been working with the engineers at Space Tango for the past few months to make sure the experiment will be a success, that it will be viable in space. They’ve done an amazing job!

Did you learn anything valuable from this experience?

Through this process I learned a lot about what it takes to coordinate a group of people to accomplish an end goal. As the team lead, I was the point person between my group and the engineers we are working with, so I had to ensure that all our communications ran smoothly. I also got more of a sense for how much work goes into preparing experiments for spaceflight and preparing a space vehicle for launch.

Did this experience affect your plans for your future education or career?

SARAH:  This experience has definitely made me consider going into a space field. After working on the project, I am interested in becoming an astronaut or working for NASA. Those are two directions that I was not seriously considering before doing this. 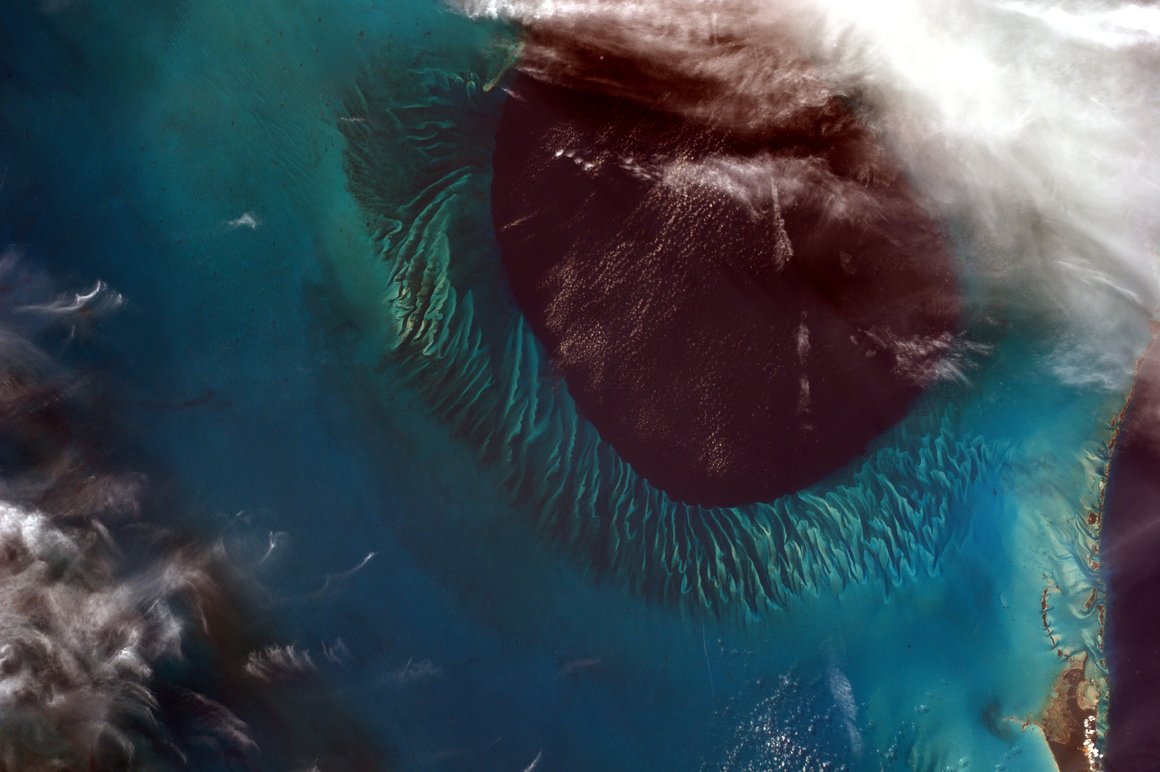 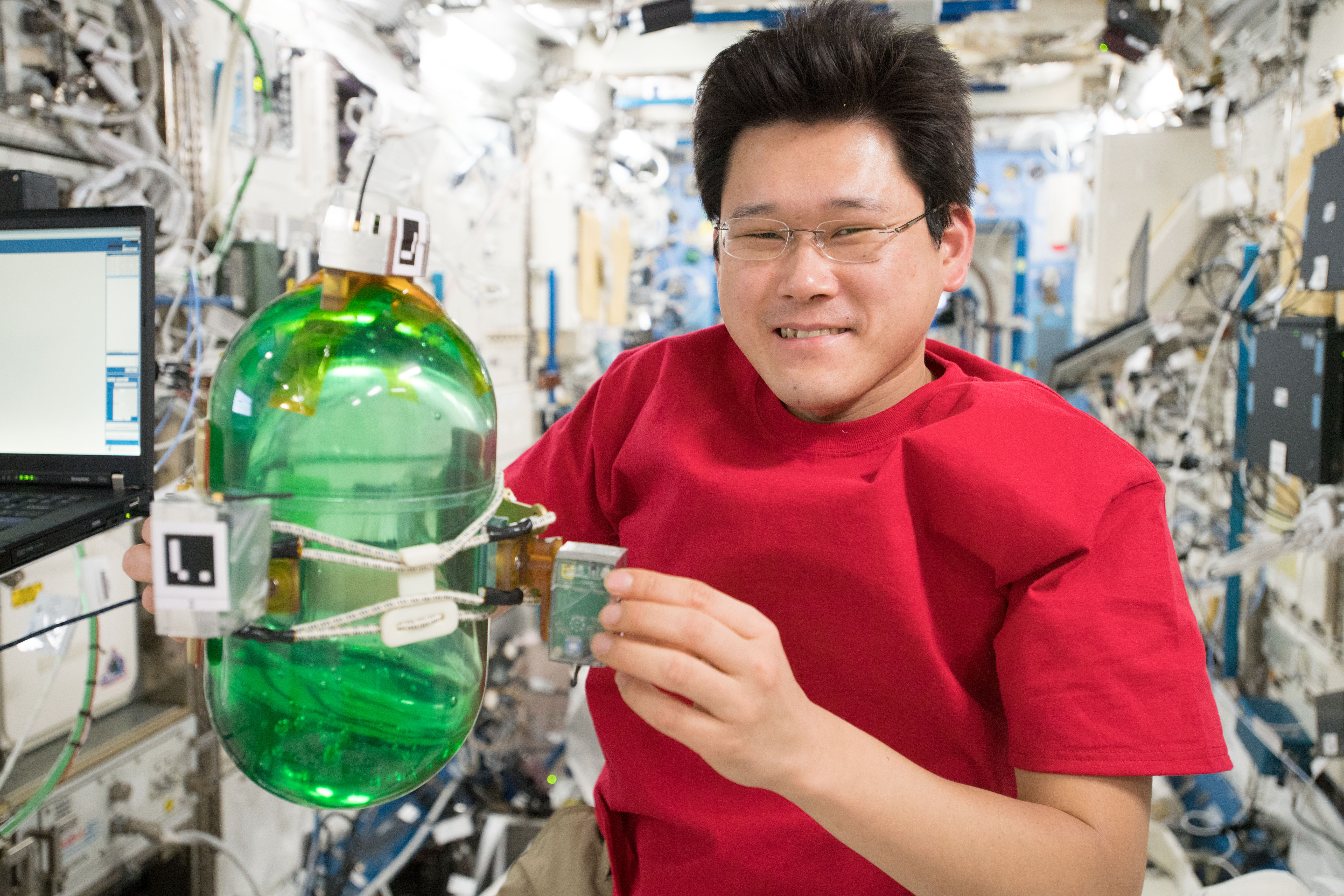