The Centers for Disease Control and Prevention reports that as many as 5 million Americans were living with Alzheimer’s disease in 2014, and projections show that as many as 14 million people could be diagnosed by 2060. Alzheimer’s, the most common type of dementia in older adults, is a progressive, irreversible brain disorder that destroys a person’s memory and cognitive abilities over time. The International Space Station (ISS) National Lab provides a unique environment to advance research related to diseases such as Alzheimer’s that profoundly affect people back on Earth.

In honor of Alzheimer’s Awareness month, below are highlights from some Alzheimer’s-related ISS National Lab investigations.

A study from AxoSim Technologies aims to demonstrate that a human nerve-on-a-chip can be used as a model for studying disorders affecting myelin (a substance that insulates the part of a nerve cell conducting electrical impulses away from the cell). Drugs developed to treat diseases impacting the central nervous system take a long time to go through the drug approval process—approximately 35% longer than non-central nervous system drugs. A nerve-on-a-chip model could be useful not only for studying tissue behaviors associated with myelin disorders but also for accelerating preclinical drug development (for example, toxicity testing). Animal models often fail to recapitulate human diseases affecting the central nervous system, and developing new methods, such as nerve-on-a-chip technology, could increase the success and efficiency of preclinical studies, reduce research costs, and accelerate the time to market for new drugs.

A project from HNu Photonics, LLC, aims to accelerate the design and development of a life sciences research facility with the potential to enable discovery of novel drugs and treatments for prevalent diseases such as heart disease, Alzheimer’s disease, immune system dysfunction, and cancer. The facility, called the BioChip SpaceLab, is expected to be installed on the ISS National Lab in the next year.

An investigation from Cellino Biotech, Inc., seeks to use its proprietary NanoLaze™ gene-editing platform unlock the potential to generate the 200 to 500 million stem cells needed for cell-based therapies, which is not possible with currently available stem cell technologies on Earth. Results from this project could help supply the millions of stem cells needed for cell-based therapies to treat critical genetic diseases such as Alzheimer’s, Parkinson’s, and hemophilia.

A project from Aphios Corporation will examine nanoparticle (microscopic particle) behavior in microgravity, toward investigating the manufacture of targeted nanoparticles that encapsulate drugs in tiny cell-like bubbles called nanosomes to treat Alzheimer’s and other diseases such as cancer, HIV, multiple sclerosis, Parkinson’s disease, and other chronic disorders. Manufacturing the nanosomes in microgravity produces particles that are smaller and more uniform, reducing the required dose per treatment and increasing product value.

Learn more about additional projects that could impact what we know about dementia and how we treat it through the online research database, and explore the ISS National Lab projects that will launch to the space station on the upcoming SpaceX CRS-16 mission. 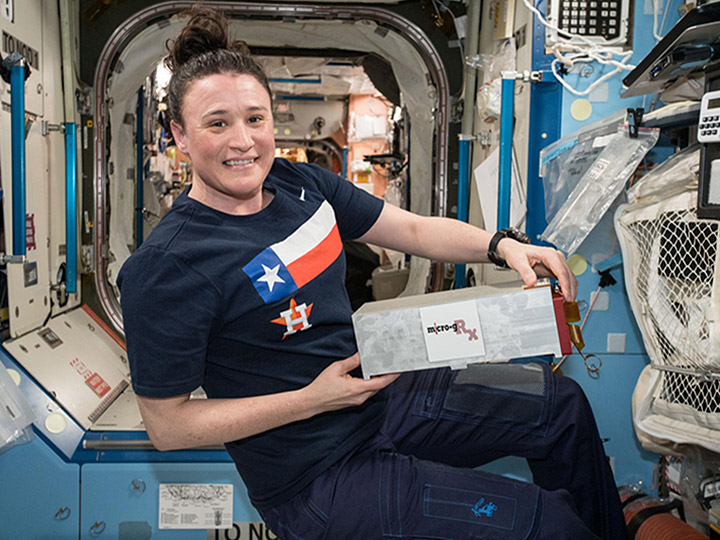