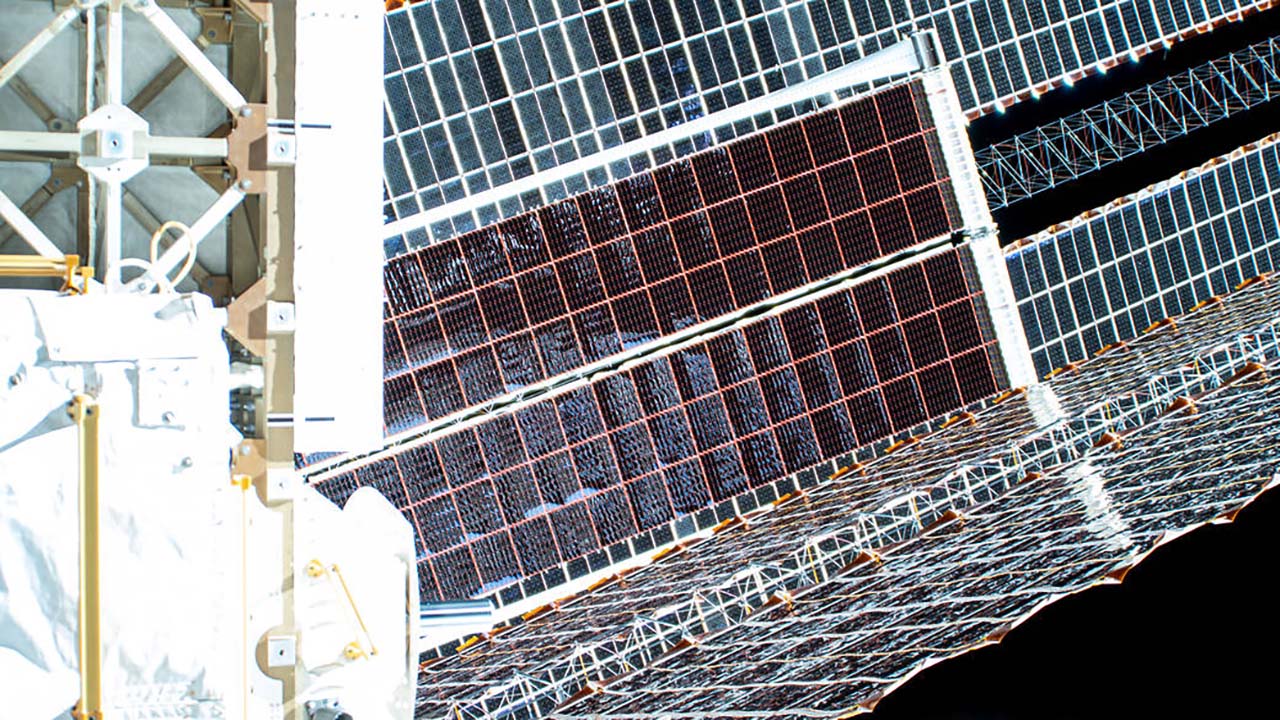 The ISS National Lab startup ecosystem has grown to include more than 125 early-stage companies that either have been awarded a flight project, have flown under the ISS National Lab allocation, or are in the various stages of dialogue toward such a future engagement. A key indicator of economic value creation by startup companies using ISS National Lab R&D capabilities is their ability to raise third-party capital subsequent to an award of a flight project and after execution of their technology or science investigation on station. FY21 was a record year of capital raising by startups in the ISS National Lab ecosystem, benefiting from growing public market appetite, expanding private capital inflows, as well as maturation of technologies and business models in our startup user base. 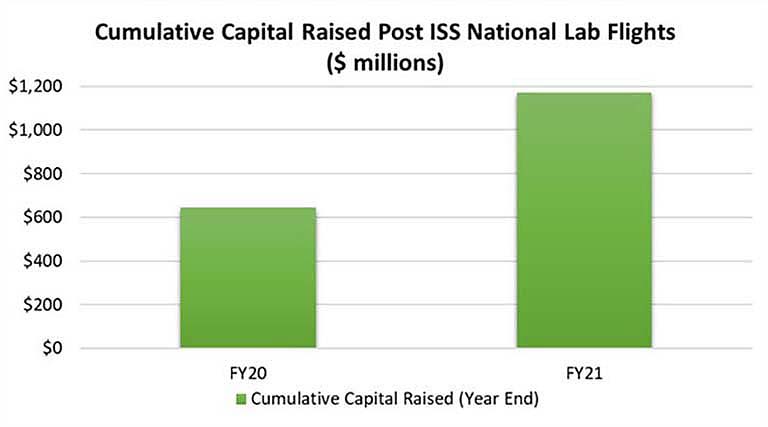 Looking specifically at the performance of startups awarded by CASIS, based on our estimates and publicly available data, these companies have raised more than $450 million (combined) of private and public funding to date following CASIS flight project award announcement, including close to $370 million following actual flight to the ISS. In addition, several ISS National Lab Commercial Service Providers have flown payloads and launched CubeSats with successful early-stage enterprises. Excluding overlapping engagements, and primarily driven by successes of two companies, Planet and Spire Global, we estimate from public data sources that these startups have raised around $800 million of capital to date following their respective flight projects. 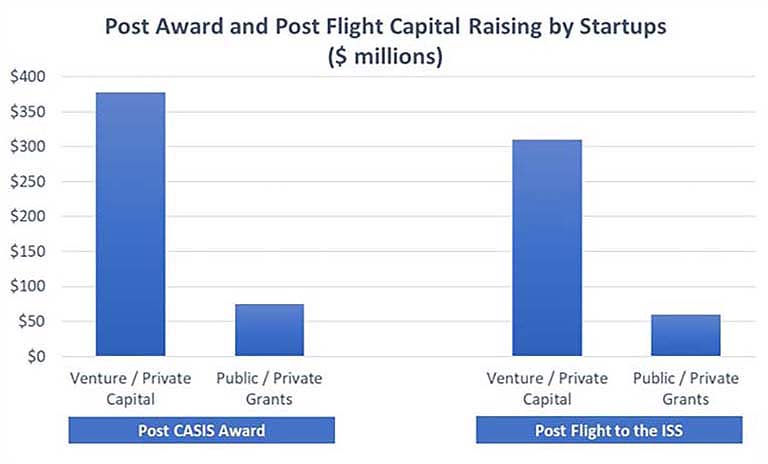 Investor engagement continued to expand during FY21, with the ISS National Lab Investor Network reaching 245 venture capital, private equity, corporate, angel, and other financial investors, up 23% year-over-year. To date, CASIS has facilitated close to 1,000 capital introductions between startups and investors in the ISS National Lab ecosystem, supporting and complementing by a multitude of financing strategies. The feedback received from the ISS National Lab startup community indicates high value added from such connections.

The ISS National Lab hosted its sixth annual startup and investor networking event, “Space Investment 2021: Innovation at the ISS National Lab.” This year’s presenters included a mix of companies across the communications, Earth observation, space R&D and manufacturing technologies, advanced materials, and life sciences sectors. All presenting companies had already conducted or are scheduled to conduct R&D studies or technology demonstrations on the ISS. The event resulted in an active dialogue and in several investor follow-ups.

Following the rebound of space sector investment activity during a volatile 2020, 2021 began with positive expectations, and the year unfolded with highly favorable capital access conditions. The key development for the space industry has been the announcement and completion of several emerging space company public listings via special purpose acquisition company (SPAC) transactions. These long-awaited exits to public markets providing return validation on earlier years’ investments have clearly caught the attention of the broader investor community. While some have raised questions around the sustainability of the recent SPAC valuations and activity levels, more broadly, the number of investors in our ecosystem has continued to grow and additional earlier-stage capital has become available to space companies. Such expanded access to capital has supported the pace of innovation in the industry, including continued emergence of new startups seeking to address a range of market opportunities.

To provide additional context on just how robust the funding environment has been this year, we have included below the recently published data from Space Capital through the third quarter of 2021. Indicative of the pace of acceleration in capital inflows, the reported infrastructure segment totals in the first half of 2021 exceeded the respective investment totals for the full calendar year of 2019, and the first nine-month totals for 2021 exceeded the comparable metric for full 2020. 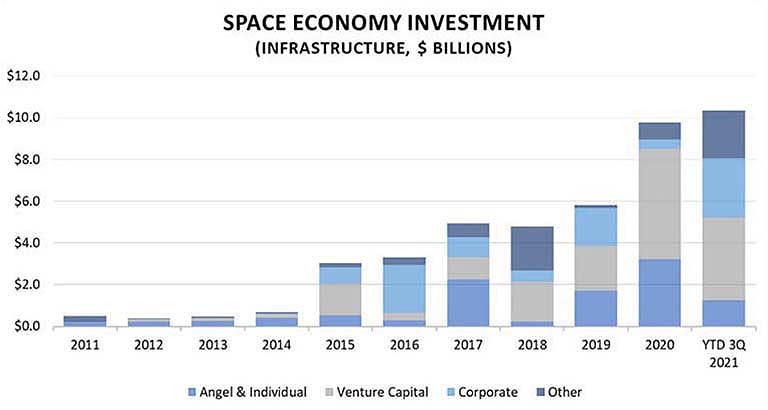 In addition to the SPAC activity, the broader merger and acquisition market continued its momentum well into 2021, creating further exit opportunities. The spectrum of deals included private equity roll-up transactions as well as strategic combinations, including some transactions using the liquidity and currency from the recently closed SPAC deals. At the same time, easing funding conditions have delayed some of the previously expected consolidation, and investor views on the merits of vertical integration have remained mixed.

While the funding dollars have historically been concentrated primarily in the launch, communications, and Earth observation satellite value chains, the range of investable opportunities in the space sector continued to expand in FY21. For example, some of the in-space activities mentioned during the ISSRDC investor panel this year included commercial destinations, orbital travel, satellite servicing, space-based manufacturing, logistics, and infrastructure. There is also increased industry discussion around the potential of microgravity-based production. In recent months, there have also been several key announcements around plans to build commercial space stations, potentially addressing infrastructure bottlenecks.

Regarding prospects for various business opportunities that target in-space activities, the investor sentiment still ranges from being very bullish to questioning the current maturity of such opportunities in terms of ability and time needed to reach paying customers, revenues, and acceptable investment returns. In general, views on the demand formation and outlook, as well as recognition of the potential size of the opportunity, are getting more positive compared with prior years.