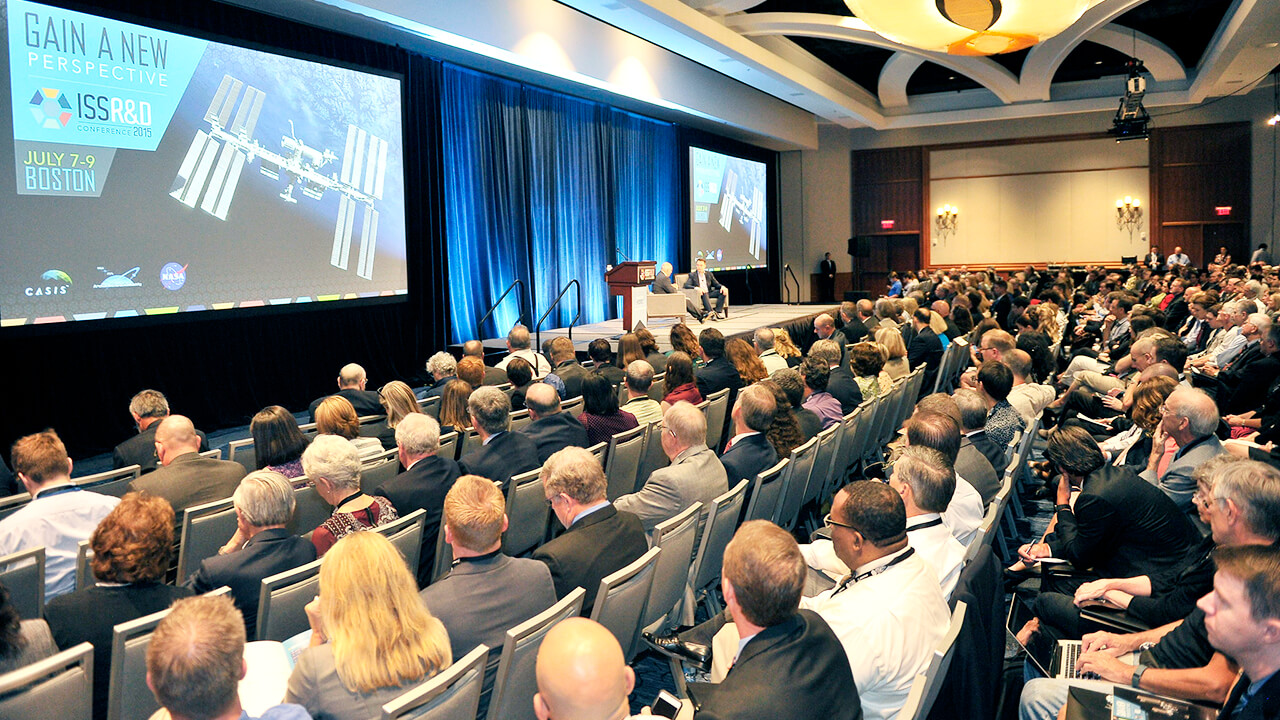 Alongside the coast-to-coast reach of the ISS National Lab network of partners and investigators (showcased in the map on pages 22–23), ISS National Lab activities sought to expand U.S. engagement using both in-person touchpoints and digital strategies.

Post-conference analysis of this year’s ISSRDC demonstrated overall success in attracting new potential ISS users. Approximately 850 people attended this year’s ISSRDC, and 52% of conference survey respondents had not attended ISSRDC in the past, 38% identified their role as researcher, and 92% are considering using the ISS now or in the future. The highest-rated sessions included notable keynote speakers such as NASA Administrator Jim Bridenstine and CNN’s Dr. Sanjay Gupta as well as an education-themed session titled “From Skylab to the ISS.” The first high school students to do experiments in space worked with NASA and the Skylab space station in 1973. The ISS National Lab tracked down those students, who are now in their sixties, and invited them to share their experiences and the long-term impact on their lives and professional careers, felt even now, 46 years later. The ISSRDC panel consisted of former Skylab high school students as well as students who have more recently conducted experiments on the ISS National Lab, each reflecting on the power of the experience and real or anticipated impact on their lives.

Additional outreach designed to inform and educate also took place throughout FY19. The ISS National Lab orchestrated or collaborated with other entities on various workshops and events.

Additionally in FY19, the ISS National Lab piloted a new approach to recruiting interesting projects that leverage LEO for innovation to benefit Earth. While formal solicitations garner investigator attention and quality submissions, some organizations are working with us to develop more targeted “pitch events,” organization-specific challenges to find quality project ideas. Similar to a Request for Proposals, a hosting organization puts out notification of an upcoming challenge, and participants submit their concept papers. The concepts are reviewed for quality of science and operational feasibility and the down-selected concepts move toward a live pitch competition. Participants have an opportunity to get information from various sources before putting together their presentation and “pitch” their idea to a panel of judges that include ISS National Lab science reviewers. Winning ideas are selected to complete and submit a final proposal, which then enters the ISS National Lab final determination review process. In FY19, the Mayo Clinic and IBM (with MIT) hosted such competitions and identified a number of candidate projects that are currently finalizing their projects plans. Based on the success of these pilot events, we plan to leverage this event-style competition for larger challenges in FY20.

Throughout FY19, the ISS National Lab continued to deepen its engagement through digital channels by showcasing ISS National Lab activities and the successes and milestones of our partners, users, and affiliates—most frequently through posts on our ISS360 blog (www.issnationallab.org/blog) and use of a variety of social media platforms. Both social media engagements (a measure of audience interactivity) and ISS360 user sessions more than doubled in FY19. In total, our social media reach increased by almost 30%, and half of new users to our website were generated based on organic search, demonstrating an increased optimization of search traffic to our content.